What does Office 2013 bring to the table that Office 2010 didn’t? Aside from improved webapps and a shiny new icon set, there’s plenty more to be found under the hood.

We’ve already taken you through a screenshot tour of the new Microsoft Office 2013, and at first glance it didn’t seem like much changed. Think again! Microsoft hasn’t just been busy working on Windows 8, Metro UI, and bankrupting Nokia.

The latest version of Office has several dozen features not seen in predecessors and I’ll introduce them starting with my favorite one.

The first feature I want to talk about is Word’s newly granted ability to edit PDF files. This might seem insignificant, but I can tell you it is probably the single most useful upgrade added to any individual app in the new 2013 suite. Previous versions of Word required add-ins to have this functionality. 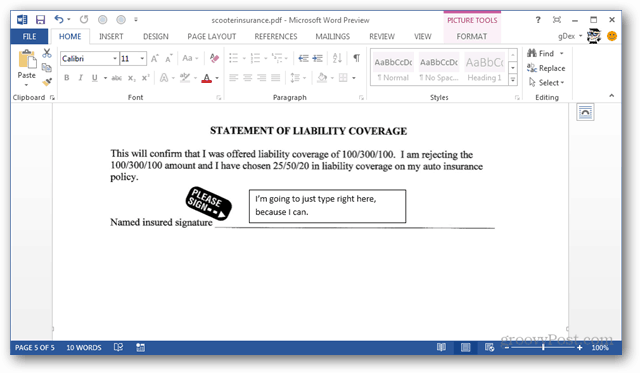 Keep in mind that this is just covering the Office 2013 365 Home Premium Preview version. As Microsoft gets closer to an official retail release, there will inevitably be more changes and features to point out.

What do you think about the updates so far? Is Microsoft on the right track? I’m impressed with what has been done with this new suite, particularly the SkyDrive integration. If Microsoft can master the web apps, I think Google Docs is going to look a little shallow in the near future.