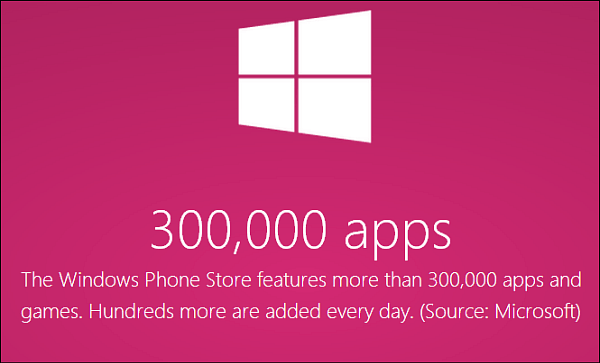 Microsoft announced last week in its By the Numbers webpage that the Windows Phone Store now has over 300,000 apps and games. The smartphone keeps going.

Microsoft announced last week in its By the Numbers webpage that the Windows Phone Store now has over 300,000 apps and games. While that pales in comparison to Android and iOS, it does demonstrate the so-called “late to the game” smartphone is continuing to move forward.

Microsoft recently updated Windows Phone 8 to 8.1, and on the heels of the 8.1 update, improved it with Windows 8.1 update that’s available now if you’re part of the Preview for Developers program which is free to join.

When Windows Phone was first released, there weren’t a whole lot of official “essential” mobile apps, but official apps have recently been added and are updated regularly, and there’s always third-party apps for various services that are actually better than the official ones.

If you’re on the fence about getting a Windows Phone, this news should make the choice a bit easier knowing there’s a good amount of apps available.