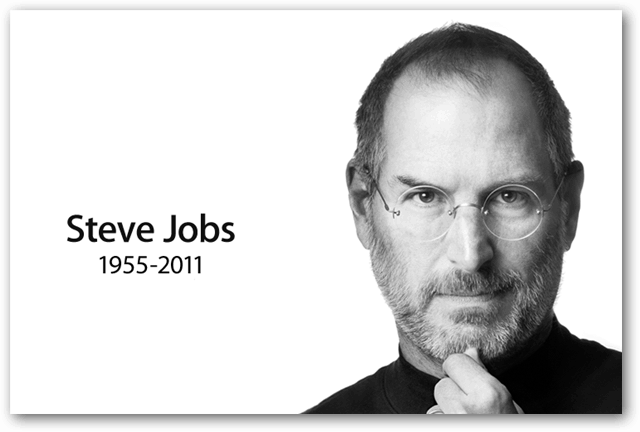 “Steve’s brilliance, passion and energy were the source of countless innovations that enrich and improve all of our lives,” Apple’s execs said in an official statement. “The world is immeasurably better because of Steve.”

“There may be no greater tribute,” said U.S President Barack Obama, “to Steve’s success than the fact that much of the world learned of his passing on a device he invented.” Over five decades,Jobs led revolutions in computing, music, animation and movies.

Apple was pivotal in mainstreaming the personal computer worldwide. Jobs’ signature style and aesthetic was renown — ever evident in such sleek Apple innovations as the original Apple Macintosh and later the iMac, iPad, iPhone and iPad. His contributions in film via Pixar were equally deep.

“The world rarely sees someone who has had the profound impact Steve has had, the effects of which will be felt for many generations to come,” said Bill Gates, founder of Microsoft. “For those of us lucky enough to get to work with him, it’s been an insanely great honor. I will miss Steve immensely.”

“Steve Jobs was an extraordinary visionary, our very dear friend and the guiding light of the Pixar family,”  wrote Pixar’s John Lasseter and Ed Catmull on Facebook.  “He saw the potential of what Pixar could be before the rest of us, and beyond what anyone ever imagined. Steve took a chance on us and believed in our crazy dream of making computer animated films; the one thing he always said was to simply ‘make it great.’ He is why Pixar turned out the way we did and his strength, integrity and love of life has made us all better people. He will forever be a part of Pixar’s DNA.”

Jobs spent much of the past decade battling illness while still pushing Apple forward. He took three leaves of absence from Apple for medical reasons, underwent surgery for pancreatic cancer and received a liver transplant. In August he finally stepped away from his daily role at Apple, resigning as CEO but continuing as chairman of the board. He was replaced by COO Tim Cook, who unveiled the latest iPhone, the 4S, in a press event at Apple’s Cupertino, Calif. headquarters Tuesday, the day before Jobs’ death.

“Apple has lost a visionary and creative genius, and the world has lost an amazing  human being,” wrote Cook in an e-mail to Apple employees today. “Those of us who have been fortunate enough to know and work with Steve have lost a dear friend and an inspiring mentor. Steve leaves behind a company that only he could have built, and his spirit will forever be the foundation of Apple.”

President Obama posted this in the White House blog:

By building one of the planet’s most successful companies from his garage, he exemplified the spirit of American ingenuity.  By making computers personal and putting the internet in our pockets, he made the information revolution not only accessible, but intuitive and fun.  And by turning his talents to storytelling, he has brought joy to millions of children and grownups alike.

Jobs was widely known as a master marketer in the tech world, introducing new products such as the iPod and iPhone at such press events as the whole world waited rapt for his trademark “one more thing…”  These words would often grace the final moments of an Apple event, only to be followed by the unveiling of something new and usually fantastic, such as the iPad.

“Steve Jobs devoted his ceaseless energy and creative genius to technology innovation that changed the world time and time again,” said Verizon CEO Lowell McAdam. “Our industry and all of our customers benefited tremendously from his pursuit of excellence. We will miss him.”

“I am very, very sad to hear the news about Steve. He was a great man with incredible achievements and amazing brilliance. He always seemed to be able to say in very few words what you actually should have been thinking before you thought it,” said Google founder Larry Page.

“His focus on the user experience above all else has always been an inspiration to me. He was very kind to reach out to me as I became CEO of Google and spend time offering his advice and knowledge even though he was not at all well. My thoughts and Google’s are with his family and the whole Apple family.”

Shortly after the announcement of Jobs’ death, Google paid tribute on its home page. The link attached to Jobs’ name in the screenshot below from Google.com redirects to Apple’s website. 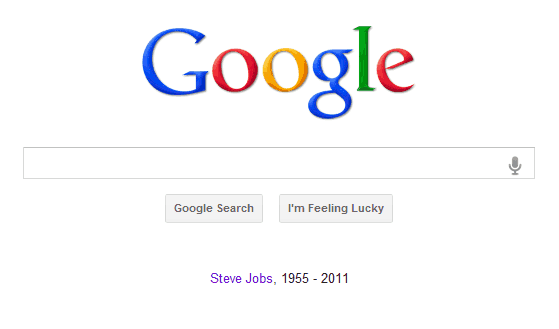 Almost instantly after word of Steve Jobs’ death, outpourings of emotion and wonder at the single man’s influence on our wider culture materialized on Twitter, the web, and just about every other communications medium. People dressed in black began showing up outside Apple’s headquarters in Cupertino. 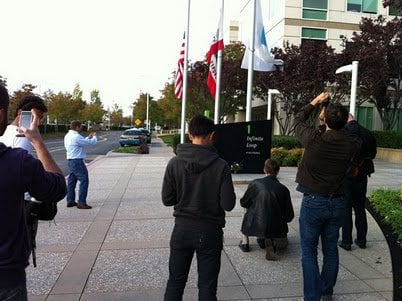 Robert Scoble posted this photo from Apple HQ on Google+

“It’s really shocking to me how profoundly this has affected so many people including myself. I’m crying at the Starbucks,” writes Lorraine Murphy on Google+. “He was the reason I got into tech in the first place: not to sell stuff, but to change the world. He made me believe I could do it and goddammit, he was right. Thanks to the tools he made, and the way he pushed the industry, we all can. And are.”

In the end there may be no better way to remember such a complex and outsized icon as Jobs than with his own words. Steve Jobs in 2005 addressed Stanford University students with this commencement speech, exhorting them to “do what they love.”