Individually, these services would cost near $450 /annually but for the next few weeks, through the holiday season, until January 4th, the price is just $199 which is over half off.

The biggest caveat being you can only buy the bundle as a gift card from physical Microsoft Store locations. Hopefully, the company will make this available on its online store, but so far, there is no indication that it will.

What are the Benefits of Microsoft Services? 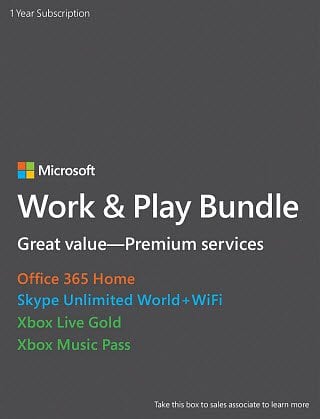 Each of the services listed above also has their perks involved, for instance, the Office 365 subscription gives you the Office suite as well as unlimited OneDrive storage that is great for backing up photos from any device. And you can install Office on up to five computers or Macs and five mobile devices.

Xbox Music Pass allows you to stream over 30 million songs ad-free on your computer, Xbox console, and virtually any mobile device.

Of course, Xbox Live Gold gives you access to all things Xbox like free monthly games and online support for either the 360 or Xbox One.

It’s also worth noting that all of these services are cross-platform and have an app for your PC, Mac, Windows Phone, Android or iOS device…even Kindle Fire and Fire Phone.

What do you think of Microsoft services in general and if you’re a fan are you going to hop on this deal? Leave a comment below and let us know.