Microsoft today rolled out cumulative update KB4041676 for Windows 10 Creators Update (Version 1703). While we’re just a week away from the public release of Windows 10 Fall Creators Update on October 17th, everything else is getting patches, too. This update comes as part of the company’s normal patch Tuesday which rolls out bug fixes for all currently supported versions of Windows.

You should get the update automatically within the next couple of days, but if you want to stay on top of the situation head to Settings > Update & security > Windows Update. Or, if you don’t want to go through Windows Update you can download the KB4041676 update and install it manually.

Note that a restart will be required to complete the installation. After the update has completed hit the Windows key and type: winver and hit Enter. There you will see the build has been bumped up to 15063.674. 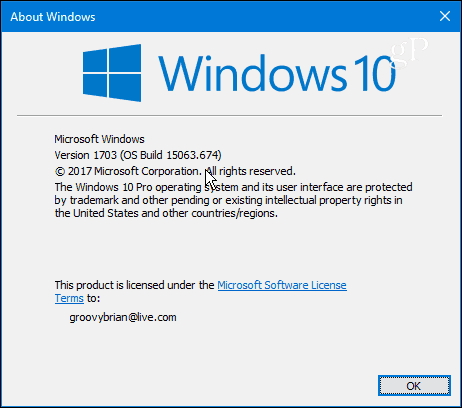 This update includes quality improvements and fixes and no new features are introduced. Below is a list of the extensive amount of fixes according to Microsoft’s changelog:

Updates were also rolled out for previous Windows 10 versions, with the final update going out to version 1511 (November Update) as the company will no longer support it after today.

After installing the today’s update let us know how your PC is running. If you’re having any problems check out our Windows 10 Forums for additional troubleshooting advice.