Microsoft today is releasing Windows 10 version 1909 aka “November 2019 Update” to users running version 1903 who manually seek it out.

Microsoft today is releasing Windows 10 version 1909 aka “November 2019 Update”. However, unlike its usual feature updates like version 1903, this one is basically what we used to call a “Service Pack” back in the day. So, while there are a few new features, the changes to 1909 are mainly under the hood.

Note: Mainstream support for Windows 10 version 1909 has ended. This is the last cumulative update this version will receive unless you’re on the LTSC or running the Enterprise or Education SKU.

In the announcement, Microsoft exec John Cable notes: “Today, we are announcing that the Windows 10 November 2019 Update is now available for users on the most recent versions of Windows 10 who seek the new update via Windows Update.” 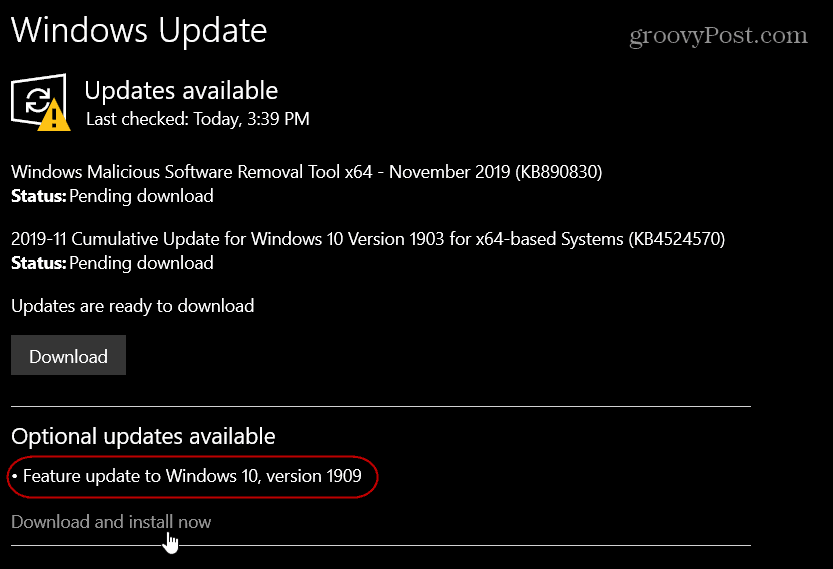 It’s important to note that Microsoft isn’t forcing this update on Windows 10 users right now. And you need to be running Windows 10 1903 to update. To get it you need to be a so-called “seeker” and manually head to Settings > Update & Security > Windows Update to install it.

As we explained in an earlier post, this is a relatively minor update. You can learn of everything new in 1909 from this Microsoft article. But here is a brief summary of what’s new in the November 2019 Update:

Now, another important thing to point out is that today is Patch Tuesday and if you’re running Windows 10 1903 you will receive KB4524570. It includes a number of fixes and improvements. If you have automatic updates enabled, it will download and install and restart your system when you’re away from your computer.

It will not install 1909. To get version 1909 you need to manually open Settings > Update & Security > Windows Update. Then click on the “Download and install now” link. If you don’t see it, your system might have some compatibility issues. And the update will be withheld as “a safeguard hold is in place” until your PC can be updated successfully.

It’s also important to note that Windows 10 version 1803 aka April 2018 Update has reached the end of service. Microsoft explains:

For Windows 10 devices that are at, or within several months of reaching end of service, Windows Update will automatically initiate a feature update (with users having the ability to choose a convenient time); keeping those devices supported and receiving the monthly updates that are critical to device security and ecosystem health. The Windows 10 April 2018 Update (Windows 10, version 1803) has reached end of service for Home and Pro editions.