Microsoft today announced that it is rolling out the latest Windows 10 mobile preview build build 10512 which comes about a month after build 10166.

Microsoft today announced that it is rolling out the latest mobile preview build for Windows Insiders. The latest is build 10512 which comes about a month after build 10166.

Gabe Aul made the announcement on Twitter this afternoon.

This should provide a big jump in quality of the Windows 10 Mobile and brings us another step closer to the final version which is scheduled to be released later this fall. Microsoft is emphasizing quality for the final preview builds that remain until the final version.

According to Microsoft’s Blogging Windows site, you should see the following improvements:

To get the latest build, if you’re a Windows Mobile Insider in the fast ring, you know the drill. Go to Settings > Update & Security > Phone Update and check for updates. And you should start downloading version (10.0.10512.1000). 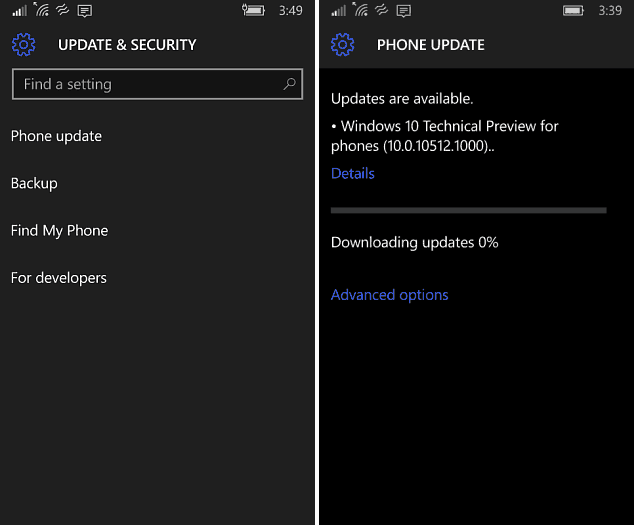 Remember to make sure your phone is fully charged, you’re on Wi-Fi, and leave your phone plugged in while the update takes place. During the upgrade process your phone will restart several times.

I am just now starting to download it to my Lumia 635, and things are not going very quickly at all. After I eventually do get the bits downloaded, we’ll be showing any major new features that you can expect. However, it seems that Microsoft is on the home stretch, and will be improving performance and patching security bugs.

Update: My update kept hanging at 0% and I did two full hard restarts, plugged it in and just left it. After a half hour, I see it’s now at 33%. From other sites I have read, this is what most users recommend. Do a couple full restarts of your phone, and simply just wait, but definitely make sure it’s plugged into a power source.

If you’re a Windows 10 Mobile Insider, let us know how the update is going for you, any issues you encounter downloading the update, and any solutions you have in the comment below.