Google released Chrome 70 which allows you to stop the controversial forced sign-in feature and it includes support for PWAs on Windows.

Google has started rolling out Chrome 70 on Windows, Mac, and Linux computers. This update sees the reversal of the controversial auto-login feature. The feature automatically forced users to log into the browser when they sign into another Google app like Gmail or YouTube. There was much criticism over the login feature from security experts and its own user base. With Chrome 70, the company is reversing course and allowing you more control over it. This version also introduces support for Progressive Web Apps (PWAs) on Windows.

The major change in Chrome 70 for the user concerned about privacy is it now allows you to turn off linking web-based sign-in and browser-based sign-in. When you turn this off, you won’t be automatically signed into the browser when you log into YouTube, for example. Unfortunately, the auto-login feature is still enabled by default, and you must manually opt-out of it. You can do that by going into the “Privacy and security” section in Settings and turn off the “Allow Chrome sign-in” switch.

In addition to the login changes above, the company is also bringing Progressive Web Apps (PWAs) support on Windows. These are simple ways to use websites as desktop apps. They are similar to web apps on the desktop but are more sophisticated. Services like Spotify are available to use as a PWA now.

To give it a try, head to the Spotify PWA site. Then click the Options button in the upper-right corner and select “Install Spotify” from the menu. Then verify you want to install it, and you will have a Spotify icon on your desktop and the Start menu. 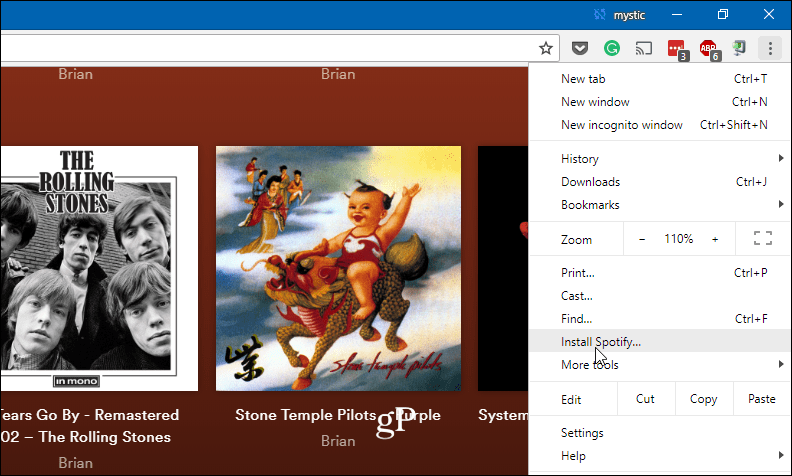 There only a few services that offer PWAs currently, but you can expect to start seeing them a lot more soon. We will have a separate article explaining PWAs in more depth as well as how to use them. Also, remember, Google updated the UI of the Chrome browser with the release of Chrome 69; if you don’t like it, here is how to change it back.

Take a look at the video below for more detailed information on PWAs and the other new features in Chrome 70: