Dropbox today announced a new way with as few as two clicks to share files stored in its cloud storage. The new feature from the company that already leads its field is already provoking The Company that Would Be King, Google, into announcing its own cloud storage system this week, possibly as early as Tuesday or Wednesday.

Dropbox today announced a new way with as few as two clicks to share files stored in Dropbox’s cloud storage. The new feature from the company that already leads its field  is already provoking The Company that Would Be King, Google,

into announcing its own cloud storage system this week, possibly as early as Tuesday or Wednesday.

Tuesday talkAndroid.com had a page devoted to a download of Google’s new product, named Google Drive, but the page was not functional.

Google is expected to take direct aim at Dropbox by offering 5 gigabytes of free storage. Dropbox currently provides 2GB of free storage with another 16GB of free space you can earn by referring your friends to the service.  But Google’s move and the fact that companies such as Minus already provide 11 free gigabytes could force Dropbox to raise its free storage quota.  Storage wars, anyone?

Describing Dropbox’s new sharing technology, CEO Drew Houston told itWire.com, “ To share a file, simply right-click on the item or folder in your desktop Dropbox, and click ‘Get Link.’ That’s it. The link can then be shared by any means–emailed, texted, tweeted, whatever–to give others access to your files,

even if they don’t use Dropbox.” OK, that’s groovy — I’ll give ya that but is it new? Not really… SugarSync, another Cloud Storage favorite has had this feature for years.

Dropbox has already been enormously successful, growing to 50 million users in five years  and $340 million in revenue last year. It has an estimated net worth of $1 billion to $5 billion. 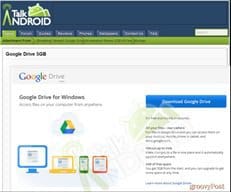 Such success could not happen without Google noticing. Although Dropbox  has a five-year jump, Google has the advantages of an enormous investment in cloud infrastructure and delivering online services.  It also has an advantage in years of developing APIs that developers already know and that will make it simple developing doors from their product opening into Google Drive.

Google Drive is expected to appear at http://drive.google.com . The URL is not yet active.