Back in June 2011, groovyPost reviewed min.us and interviewed its co-founder, John Xie. At the time, we deemed it a groovy drag-and-drop, no frills image sharing web app that showed lots of promise, even when compared to imgur and Flickr. Last week, Mr. Xie dropped me a line to let me know that Minus had been astir with updates and improvements. He asked us to take another look, and we did. In brief, Minus has become about 44% prettier, 74% more social, and 56% more mobile, while remaining 100% ad free. Minus also managed to learn some new tricks without losing its simplistic allure. Read on to find out what’s new. 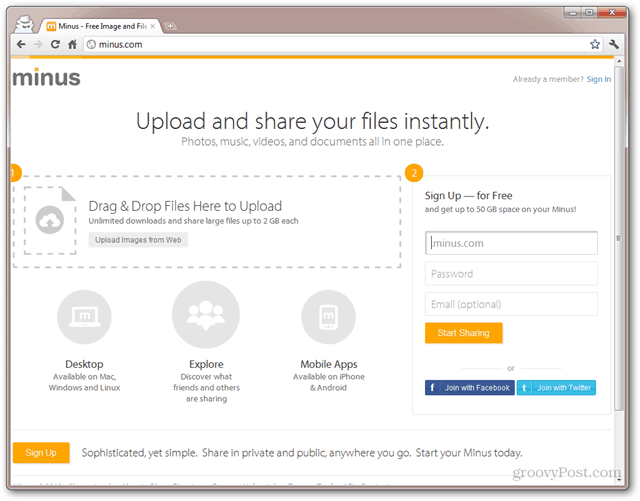 Overall, the core functionality of Minus (i.e. dead simple image sharing without registration) hasn’t changed. So it still gets a groovy rating from me. It does seem that Minus has become slightly less user-friendly for unregistered guests. Previously, there was little incentive to register. Uploading and administering images was all handled through a system of custom URLs that didn’t require a login and password to access. It seems that Minus has done away with the custom URLs for editing, and I’m not entirely clear on how an unregistered guest stops someone else from deleting or editing an image. It looks to me like you can add a #1o to the shareable URL to disable the edit/delete functions, but clearing those three characters out of the URL easily brings them back. Minus files uploaded by guests also expire after 30 days, adding to the uncertainty. 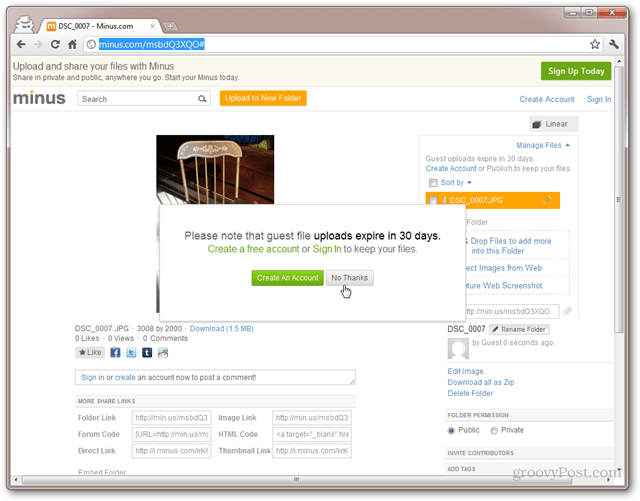 Really, though, it’s almost a non-issue, since there is relatively little to lose by registering. I can’t remember the last time Minus sent me a mass email. Minus may be free but storage is not so that’s reasonable. So, let’s focus on some of the new and improved features.

Up to 50 GB of Free Space (plus expanded file support)

There’s a cloud storage arms race underway, with the likes of Dropbox, SugarSync, SkyDrive, Box.net, Mozy, Google Drive (again), etc. offering free storage in ranges between 2 GB and 25 GB. Minus throws its hat in the ring by offering 10 GB of free storage space to all registered users. Like Dropbox and SugarSync, you can earn more storage by referring your friends. The max at the moment is 50 GB, which easily outstrips Dropbox’s approximately 10 GB max but doesn’t come close to the comical 250+ GB I’ve earned in free SugarSync cloud storage thanks to referrals. 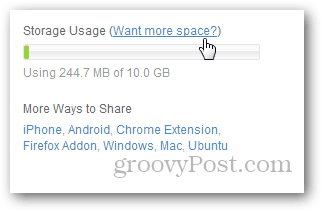 Although Minus’ obvious forte is image sharing, it does allow you to upload other file formats. And if you have the Dropbox or Evernote app installed on your iPhone, you can even download files from Minus to your mobile device (sort of). Given that, I would count Minus among the candidates for cloud storage across all your devices. Minus also supports browser viewing of PDFs, most Microsoft Office files and playback of .m4a audio files.

Minus recently introduced folders, which lets you group together images and files however you please. This is a simple upgrade, but an important one. For savvy users, it opens the doors for some very functional organization. From Pinterest-style topic-dedicated boards (e.g. decorating ideas, food, clothing) to multimedia playlists, Folders for Minus really make sense. 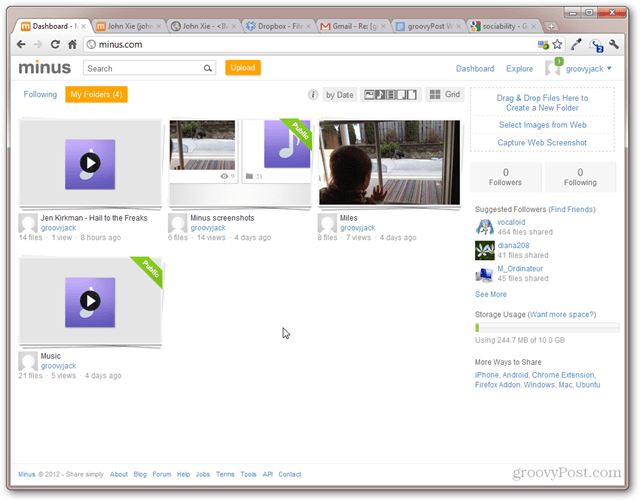 When I last reviewed Minus, it had a sheen of socialability. Now, its social network-like capabilities are more fully fledged. It reminds me very much of Pinterest or Instagram in its very visual, very casual Explore feature. You can follow other minus users, or browse through what the general community has to offer. You can also explore by topic, or browse the recent uploads of your friends. 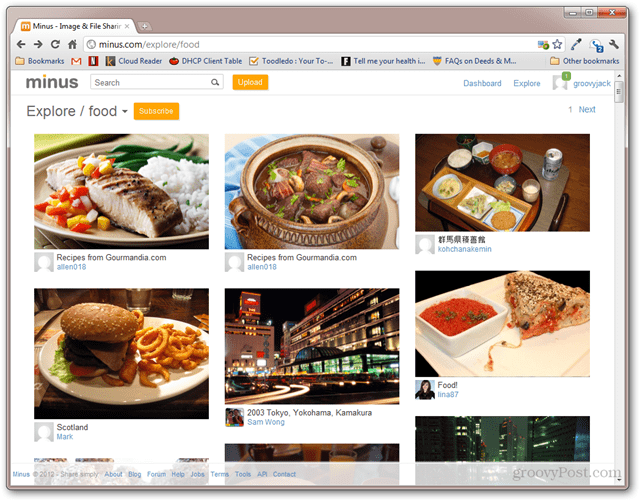 The Minus iPhone app has received a major facelift since I last checked it out. Aside from the eye candy, it has a much improved upload/folder management interface (uploading multiple files is a breeze) and photo editing/effects courtesy of Aviary (also available on the web). 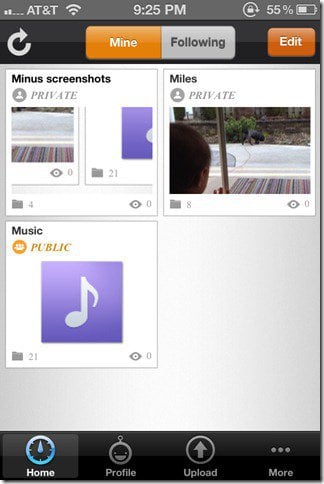 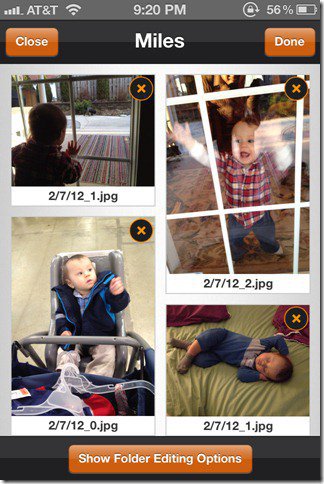 Mobile photo editing is done just before you upload a picture from your camera roll. You get one chance to add your effects, stamps, and other fun stuff. After that, the photo is “locked down.” You can still edit it on the web, though. 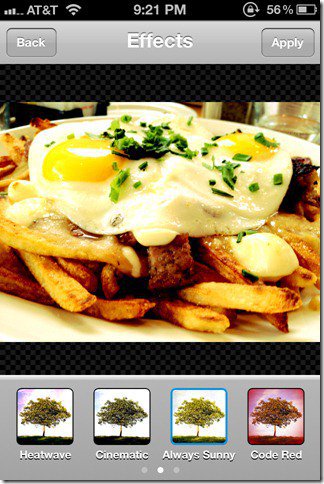 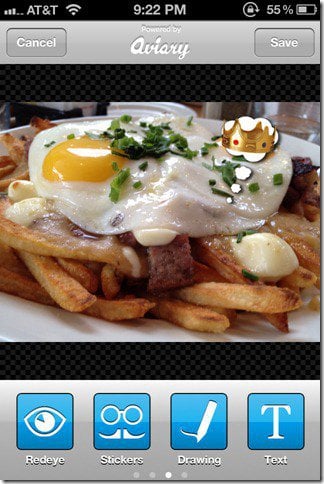 Mobile Minus also has some multimedia functionality. It can play basically any audio or video file supported by iOS (note I haven’t tried other mobile platforms with Minus). I had high hopes for its music support, thinking that I could use it as a cloud-based music player by creating folders for each album or playlist. Unfortunately, it doesn’t navigate between tracks very gracefully. While it would be nice for uploading TV episodes, I’ll have to stick with groovyBox when it comes to music. 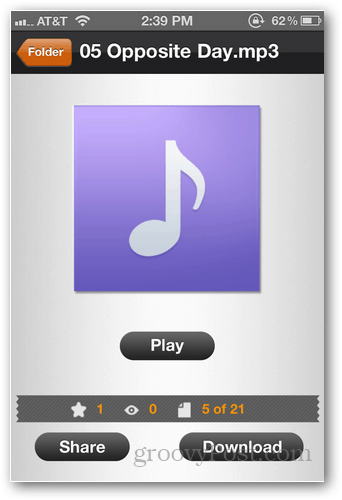 Same goes for the web version. You can play files one-by-one, but doing a playlist isn’t quite there yet. 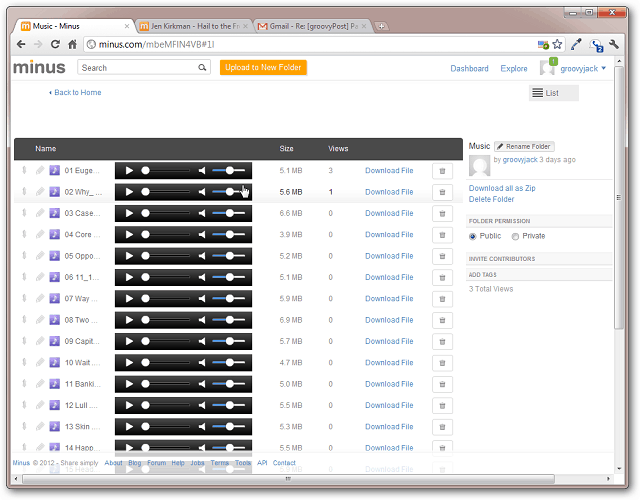 But overall, I am very pleased with how easy it is to upload and navigate files via the minus iPhone app. Previously, I thought Dropbox took the cake in terms of easy bulk image uploading. But Minus gives you up to 50 GB of free storage, so for dumping files, I think I’ll go with them for now.

Minus earns karma on my score sheet for being conscientiously multi-platform (supports iPhone, Android, Chrome, Firefox, Windows, Mac, Ubuntu) but frankly, with exception for mobile apps, I don’t like installing stuff. I did try out the Chrome extension and the Windows app, and they do look great and work well. But when it’s just as easy to do everything through the web browser interface, why bother? The Minus browser extension does allow you to take screenshots of webpages, but as a professional blogger, I’ve already invested in higher end tools to accomplish this. For more casual screenshotters, the Minus extension may be appealing, however.  But overall, I recommend simply bookmarking Minus.com. The website is so intuitive and slick, it doesn’t really need anything else. 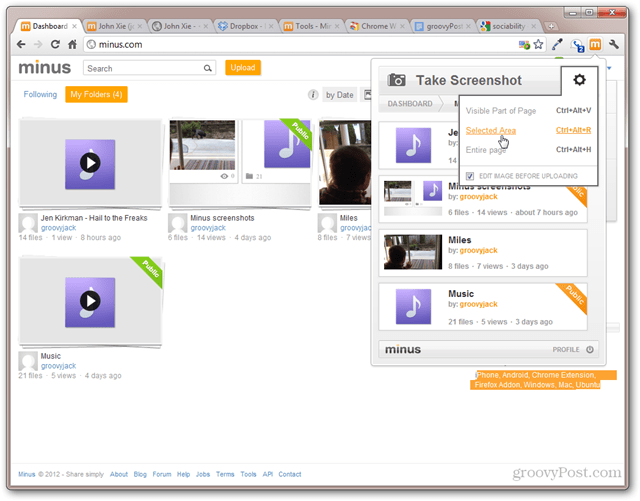 With all web-based startups, the ultimate question is: will it survive? That’s an important one to ask, especially when trusting a brand new company with (up to 50 GB of) your precious memories. Remember Drop.io…?

With no advertising and no fees, it wouldn’t be outrageous to ask how the developers are making a living. For the time being, the answer is venture capital.  How Minus was going to introduce profitability without impacting usability was our burning question when we talked to Xie earlier, and he said: “We have few solid ideas but not much we can share at the moment. Our focus right now is on making Minus more user-friendly.” So, it seems with this updated review, we see Minus getting more user-friendly, just as Xie promised. But as for the update that will allow Minus to make money on the website that is seriously starting to grow on us—that’s still waiting in the wings.

One thing’s for sure: even if Minus isn’t the next file/photo sharing platform we are all using in the next five years, you can bet that whatever it is, it will look, feel, and function a lot like Minus. Minus, to me, represents the next generation of dead simple photo sharing apps that does away with much of the clunk of the current heavyweights. The clean, drag-and-drop interface, the inviting social atmosphere, and the permissive environment almost make you forget you are using a web service at all. And as the designers of Apple have shown, that’s half the battle.