Apple is starting to release regular updates for iOS 11. The latest version 11.0.3 adds fixes specifically for the iPhone 6s and iPhone 7.

It seems like this is going to be a regular gig going forward—another week, another point update for the new iOS 11. We haven’t even received the first major maintenance update – iOS 11.1 – which is still in testing. This week, Apple released iOS 11.0.3, but this release might not be a must-have. Then again, you could say the same about iOS 11.0.2. So, of course, you’re wondering: What’s new in this update? What are the improvements? Should I download it?

According to Apple, iOS 11.0.3 is available for iPhone 5s and later, iPad Air and later, and iPod Touch 6th 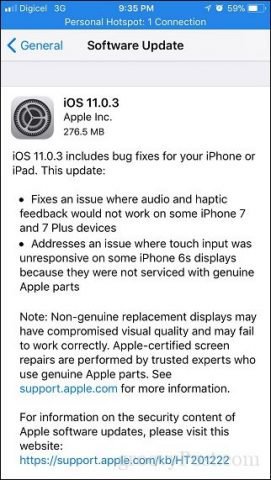 generation. The update, just like the previous release is also around 280 MBs. The bug fixes in this update address both the iPhone 7 and iPhone 6s. Here are the details:

Apple went on to say:

Non-genuine replacement displays may have compromised visual quality and may fail to work correctly. Apple-certified screen repairs are performed by trusted experts who use genuine Apple part’s. See support.apple.com for more information.

So, unless you own an iPhone 7 or you made third-party repairs to your iPhone 6s display, you are not gonna see much in this update. Should you upgrade? I say why not, it’s not as critical as a major point release, but at the same time, it makes no difference if you choose to skip it. Users can probably delay it until something more substantial shows up.

iOS 11 seems to be off to a great start, surpassing its predecessor in less than two weeks by claiming 47% market share. Some users such as my sibling are holding off on upgrading since they are using a work-issued iPhone with legacy 32-bit apps. We have started covering some of the new features so far such as the improved iOS 11 Notification Center. We will have more details in the coming days.

What are your favorite features and changes in iOS 11 so far? Tell us in the comments.