iOS 11.0.2 fixes a number of issues, including the crackling issue on iPhone 8 and iPhone 8 Plus devices.

The iOS 11.0.2 update applies to the iPhone 5s and later, iPad Air and later, and iPod Touch 6th generation. 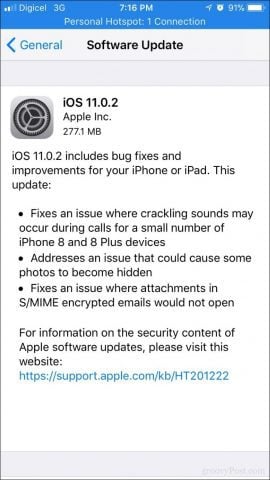 For a minor update it’s surprisingly large, weighing around 278 MBs. As always, connect to a speedy network and grab it. Here is a list of changes and improvements:

And that’s about it really. If you have been holding out for those first set of bug fixes before jumping from iOS 10, now is a good time. Just today, Apple stopped signing older releases of iOS 10.3.3. and 11.0, encouraging customers to upgrade.

That means if you don’t like iOS 11, you are stuck with it. So far, it’s been performing well. I’m looking forward to the return of 3D Touch app switcher, which I found useful in version 10, instead of having to double press the Home button.

In addition to iOS 11.0.2, Apple also released watchOS 4.0.1, which fixes issues with cellular networks in the new Apple Watch Series 3.

While two rounds of minor updates in as many weeks may seem like a lot, it’s far from a failed launch. We’ve come to expect a few tweaks shortly after a major release, and that’s exactly what these minor releases are meant for.

If you have an iPhone 8 and you are experiencing the crackling issue during calls, you should definitely update as soon as you can. For those with earlier versions of the iPhone, then the update may not be as critical.

Have you updated to iOS 11 yet? If so, how well is it going for you? Let us know in the comments. Also, be sure to let us know if you’ve had the crackling audio or hidden photos issue.