If you’ve found Windows 10 File Explorer is not responding, or any other Windows elements like the Taskbar or the Desktop, you can restart the explorer.exe process to refresh it.

The explorer.exe process is the user shell in Windows. You probably think of File Explorer when you hear explorer.exe mentioned. However, the process also runs the desktop, Taskbar, and other interface features. It’s an important part of Windows, but it can be stopped and restarted.

So, if Windows 10 File Explorer is not responding for you or other parts of the Windows interface are not working as expected, you can refresh the explorer.exe process by restarting it. This usually has no negative side effects on other running programs.

Today, we’ll show you four ways to restart the explorer.exe process in Windows 10.

If Windows is still responsive, the easiest way to restart the explorer.exe process is through the Task Manager. 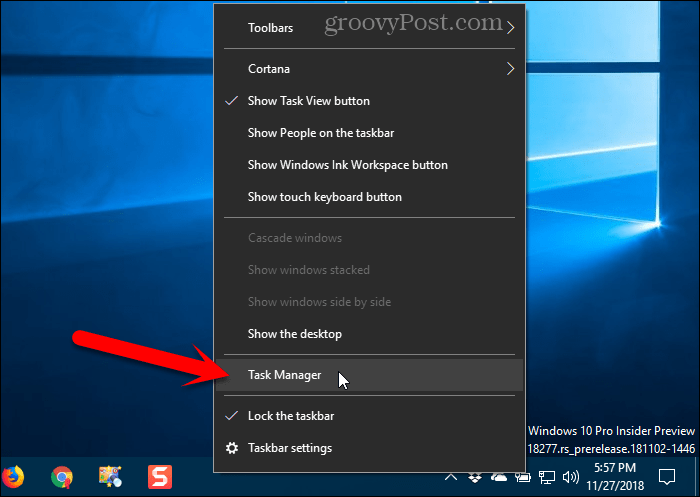 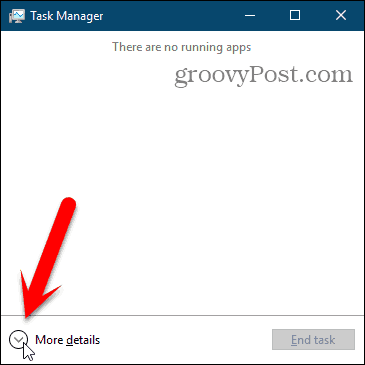 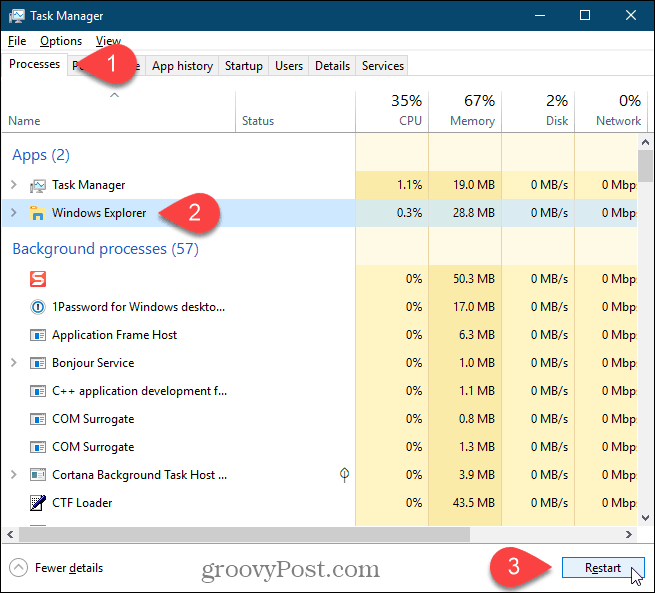 You can also right-click on the Windows Explorer process and select Restart. 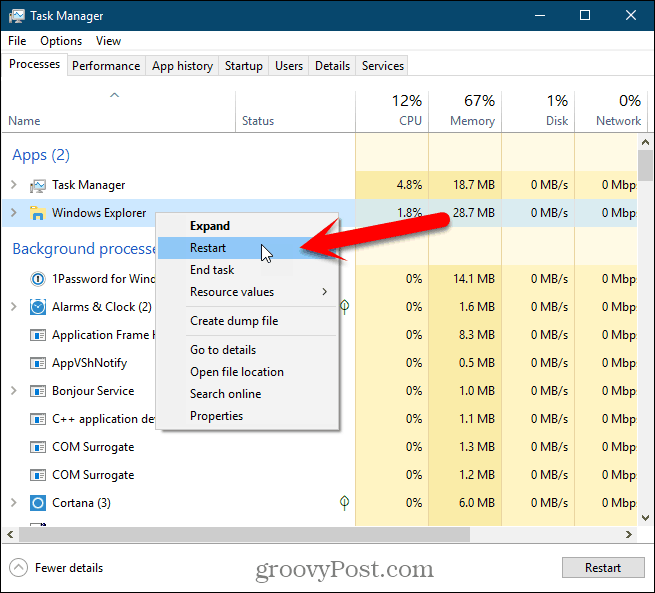 You’ll see the desktop icons and the Taskbar disappear for a second or two and then come back.

This method is a bit longer, but we include it for completeness. We’re going first to exit Explorer (end the explorer.exe process) and then rerun it in Task Manager.

Select Exit Explorer from the menu. 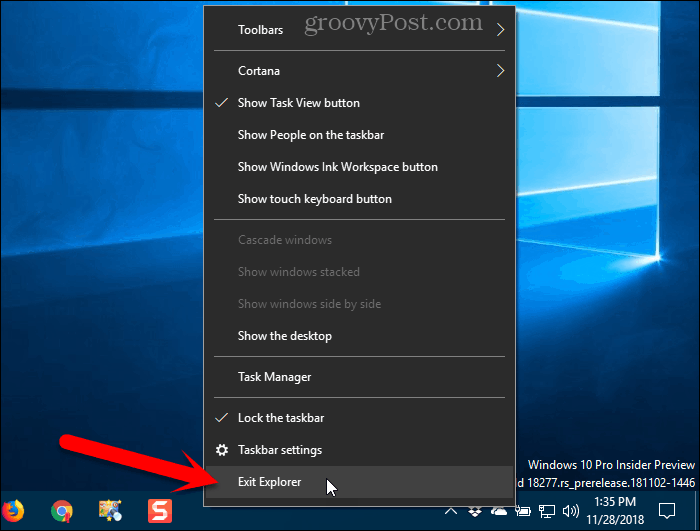 Your screen will be blank because you’ve ended the process that controls the desktop elements, like the Taskbar icons. 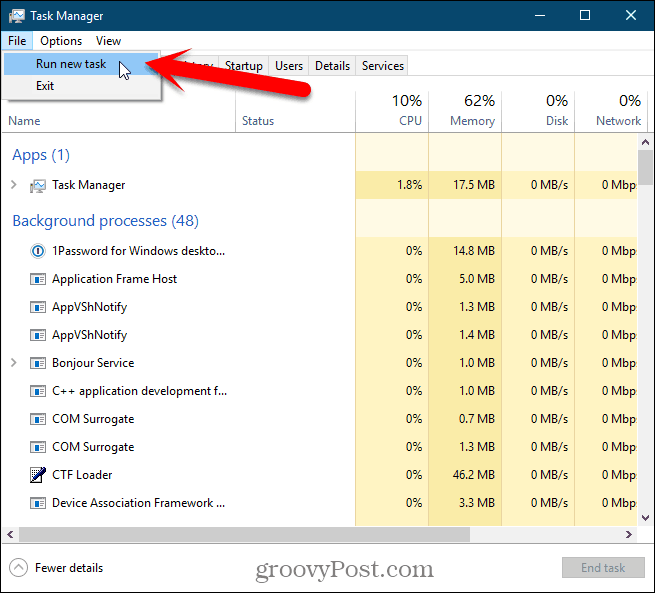 On the Create new task dialog box, type: explorer.exe in the Open box and click OK.

All the desktop elements come back.

You can close the Task Manager. 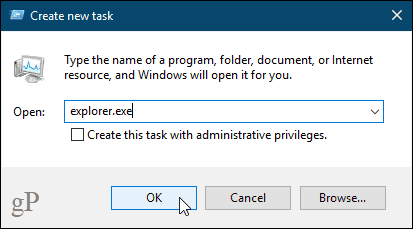 If you like using the command line, you’ll be glad to know you can restart the explorer.exe process using a couple of simple commands.

Type: cmd.exe in the Open box and click OK. 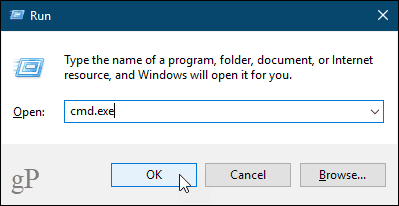 Type the command below at the prompt and press Enter. This ends the explorer.exe process. You’ll see a blank screen behind the Command Prompt window. Keep the window open.

To start the explorer.exe process again, type the following command at the prompt and press Enter.

Your desktop icons, Taskbar, and all the other desktop elements come back.

Instead of opening a Command Prompt window and typing the two commands in the previous section every time you want to restart the explorer.exe process, you can run these commands by double-clicking a single file.

We’ll show you how to create a batch file, which is a file that contains a script that runs when you double-click on the file.

Open Notepad or your favorite text editor. Copy the following three lines and paste them into the text editor. 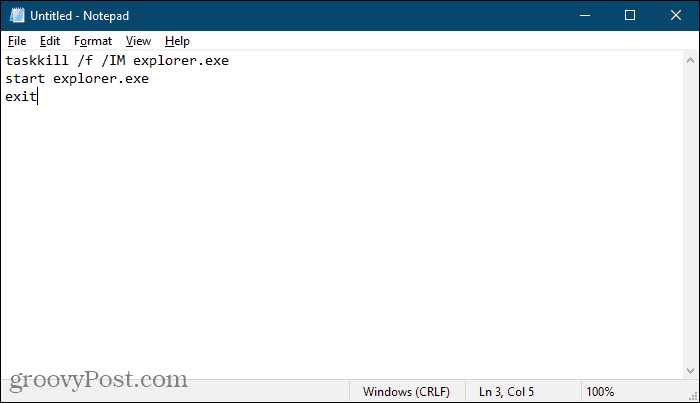 Now we need to save the file as a batch file.

Go to File > Save As. On the Save As dialog box, navigate to where you want to save the batch file. You should save it somewhere easy to get to, like the Desktop. Or, you can save it somewhere on your hard drive and create a shortcut to it on the desktop.

Enter a name for your batch file in the File name box. Instead of the .txt extension, make sure you use the .bat extension. 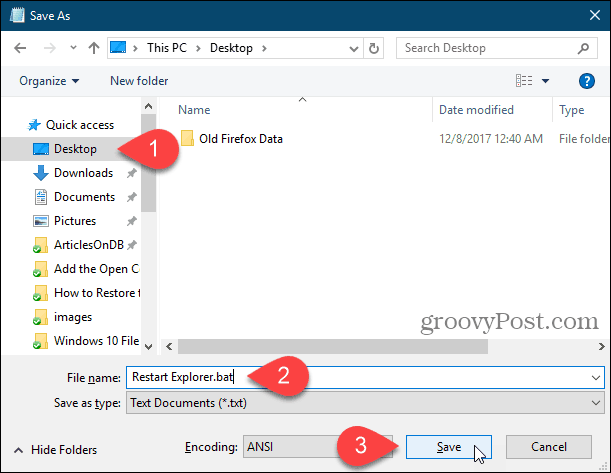 When you need to restart the explorer.exe process, double-click on the batch file you created or the shortcut to it.

Easily Reset the Desktop, Taskbar, and File Explorer Any Time You Need

There are other reasons you may need to restart the explorer.exe process. For example, when you make a change to the registry, you may have to restart the process to complete the change.

We’ve also covered how to restart the explorer.exe process in Windows 8 and Windows 7.