Apple Arcade is a new game streaming service that allows access to over 100 games on your iPhone, iPad, and Apple TV. Here’s a look at what you can expect.

In the coming weeks, Apple Arcade is officially launching on the App Store around the world. The ad-free gaming platform arrives first on iPhone on Thursday, Sept. 19 with the public release of iOS 13. It will also become available on iPad, Mac, and Apple TV. Here’s a look at you to need to know about Apple’s all-new gaming subscription service.

What is Apple Arcade?

First announced in March, Apple Arcade is a video game subscription service without ads or in-app purchases. The games are new and exclusive to the service, and they come from some of the biggest names in mobile gaming, including  Sega, Lego, Snowman, and many more. At launch, around 50 gaming titles will be available with many more launching in the coming weeks. Before the end of 2019, the service will have about 100 titles and growing. Games on Apple Arcade support Xbox and Playstation controllers; many are for multiple players.

Apple Arcade gameplay links to your iCloud account, which means you can jump back and forth between devices without losing your spot in each game. Better still, there’s no always-on DRM, meaning you don’t need an internet connection to play. Not surprisingly, you’ll need that connection for progress resyncing and to confirm your subscription occasionally. The service supports Screen Time and parental controls. 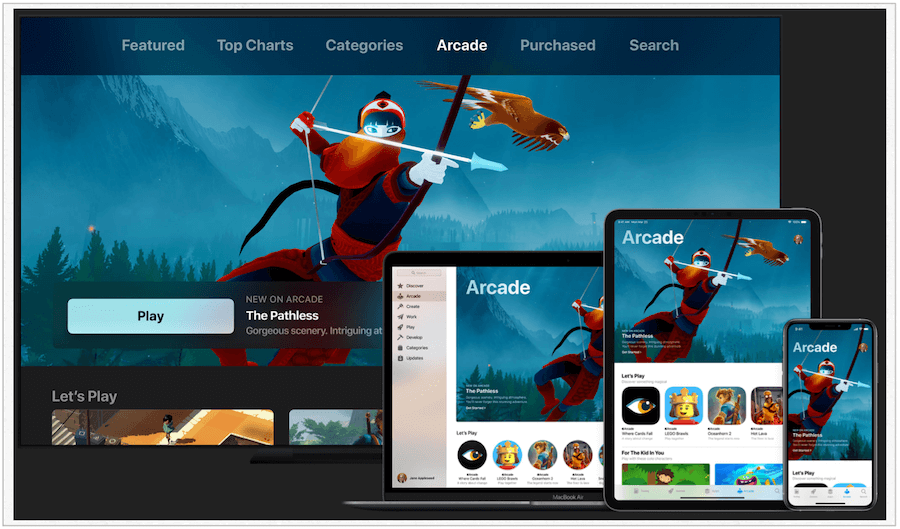 Apple Arcade is $4.99 per month with the first month free. You can cancel your subscription at any time, and each subscription is good for up to six iCloud family members. Think of it like this: A family of four can access all the games for just $60 per year. Sounds like a great deal, no?

At Apple’s iPhone 11 event earlier this month, the company demoed three of the first games to launch on the service. In addition to showing a new take on a classic, Frogger in Toy Town, it showcased Sayonara Wild Hearts and Shinsekai Into the Depths.

Other titles sure to stand out include LEGO Brawls, Mini Motorways, Rayman Mini, Oceanhorn 2, and Where Cards Fall.

Signing Up and Using Apple Arcade

You’ll find a link for Apple Arcade in the App Store app on your Apple device. On the iPhone, for example, you’ll see a tab called Apple Arcade on the bottom of the app in iOS 13. Tap Try for Free to get started.

You’re given the opportunity to sign-up for a 3o-day free trial of Apple Arcade. Once you accept, you can begin using the service immediately across all your supported devices — once Apple Arcade launches on those platforms.

To begin using a game in Apple Arcade, you’ll first need to select it. Tap Get to download a game. Once installed, you can play the game just like you would with any other title from the App Store. Just tap on the game icon on your device’s Home screen. 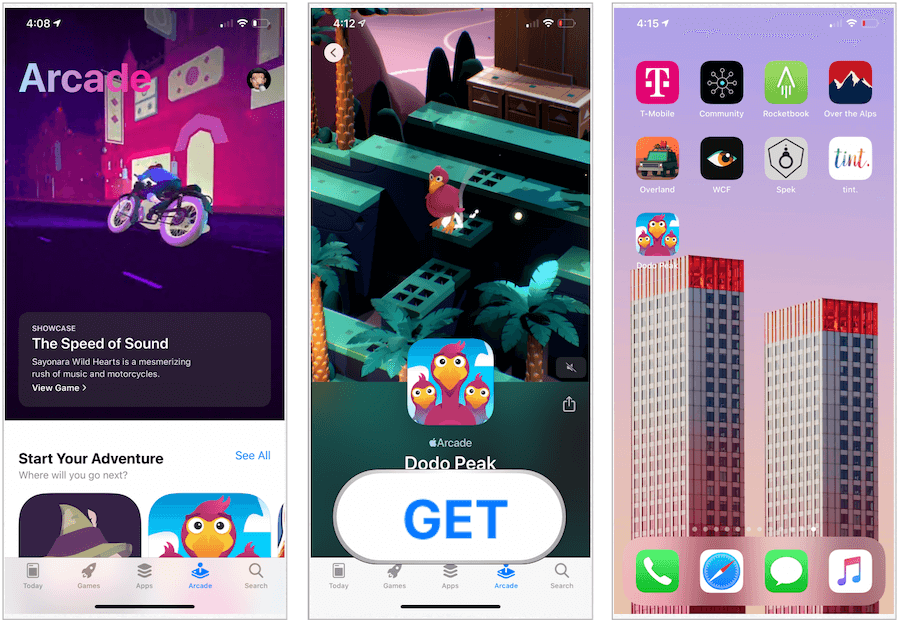 Apple hasn’t announced the average storage size for Arcade titles. However, they could prove significant, depending on the complexity of the game. Over the Alps, for example, is 2.69GB, while Overland is 1.18GB. By contrast, a title like Rayman Mini is just 285.8MB. If you’re planning on playing a lot of the games, keep this in mind. When the time comes to purchase a new Apple device, it might be wise to buy one with more storage.

Is Apple Arcade Worth it?

Apple Arcade will no doubt find early success and lots of players thanks to the service’s initial 30-day free trial. From there, $4.99-per-month for unlimited access to nearly 100 gaming titles (and eventually more) across multiple platforms (for up to five additional family members), sounds worth it. We can’t wait to see how the service developers in the coming weeks and months.

And another thing to consider is you won’t need to constantly use in-app purchases to continue playing any of the titles included in the subscription.

Apple’s releasing iOS 13 and tvOS 13 to the general public on Sept. 19. On Sept. 30, iPadOS 13 arrives on iPad. Later in October, the company plans to release macOS Catalina for Mac. You’ll need these updates to use Apple Arcade on each platform.