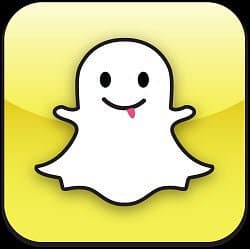 Dying to know what all the buzz around Snapchat is about? In this article, we’ll take a look at how Snapchat works and why you might want to use it.

Snapchat is a social media app that lets millennials send each other selfies that are automatically deleted after a few seconds. That’s the common conception among those who’ve heard of the app but haven’t used it. It’s simple on its face. But considering its recent IPO and the legendary $3 billion offer from Facebook’s Mark Zuckerberg to buy it out (Snapchat founder Evan Spiegel said “no”), there’s clearly much more to Snapchat than meets the eye.

In this article, we’ll show you what Snapchat does and try to help you understand its meteoric rise in popularity that has expanded far beyond its original millennial user base.

How to Use Snapchat

Snapchat is a social network that lets you send photos and text messages to friends that expire. This has been a hallmark feature of the service since its beginning. The idea is that it lets you be more genuine and spontaneous, without having to worry that future employers or in-laws might stumble across it (a very valid concern with more prominent and indelible social media profiles, like Facebook and Instagram).  There was the initial concern in the media that such baked-in ephemerality would make the platform rife with racy content, but studies show that this isn’t actually Snapchat’s main appeal.

Snapchat has since expanded beyond its core functionality into an array of more mainstream features such as Snapchat Stories which let you post or watch short videos. Before you can begin using Snapchat, you need to download and install it. The app is exclusively mobile and works on iOS and Android. Sorry Windows Phone folks, Evan Spiegel is not a fan of Windows, so don’t expect to see a version available for it anytime soon.

Snapchat remains an unfocused app, meaning, it’s a hodgepodge of different features and functionality: selfies, Stories, creating emoji and instant messaging. In order to use Snapchat’s core feature – sending expiring messages – you need to have friends. There are a couple of different ways to add contacts: using a snapcode – which is similar to a QR Code – just scan the code using your smartphone camera and the contact is automatically added; using geolocation; or by importing contacts from Facebook. Users can also share their Snapchat name using the Share sheet in iOS. 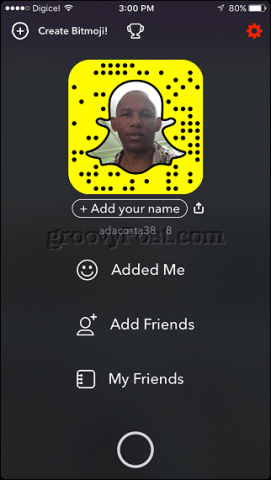 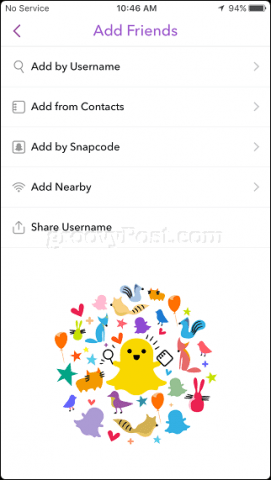 To start using Snapchat, choose whether you want to take a picture of yourself or use the front-facing camera. You can also tap the circle below the camera button to access your camera roll and use an existing photo. After capturing your photo, you are presented with the editing interface where you can make quick modifications. 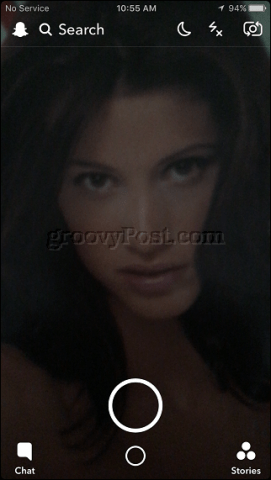 Set the timer for how long you want your message to be available. 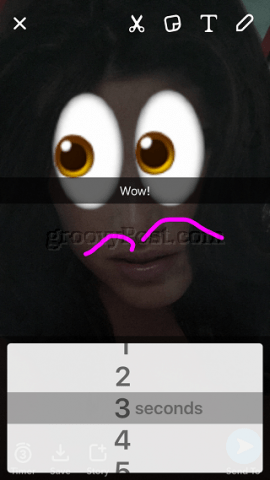 Most users set their snaps to expire after a few seconds, but you can also convert into a Story, which will let friends view it for up to 24 hours before it expires.  You can also save your snap to your camera roll.

You can also crop photos and create stickers from your image. 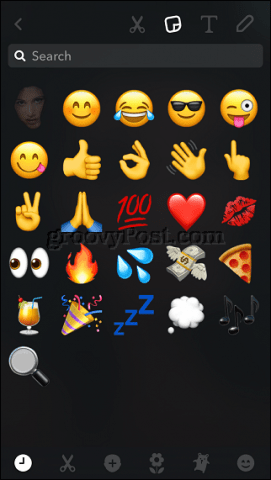 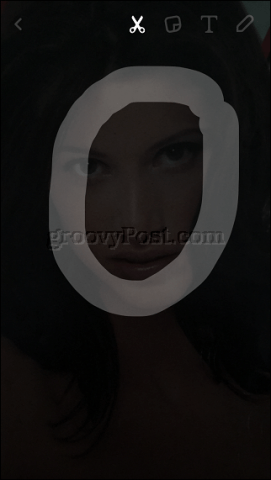 If you don’t like what you have cropped, just tap the cropped image then drag it to the trashcan. 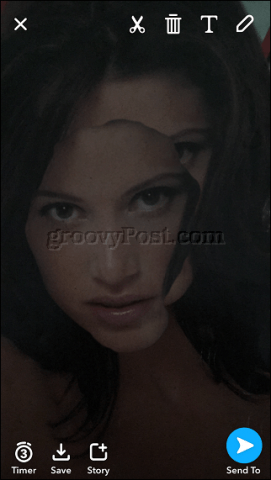 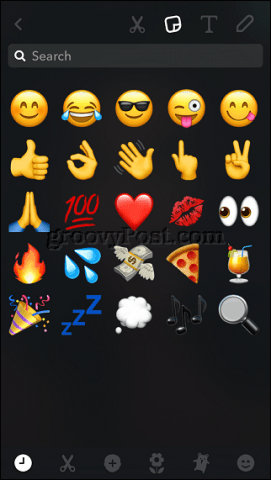 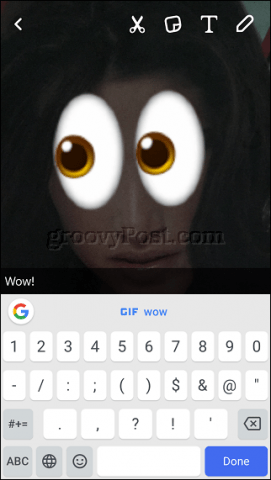 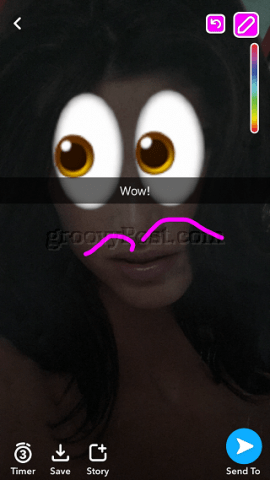 When you are satisfied with the results, tap the Send to button then choose whether you want to make it a Story in addition to sending to your contacts. 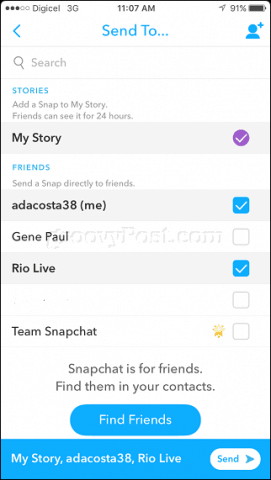 Another feature Snapchat has made viral is filters. Filters let you add gimmicky effects to your photos. If you hang out on social media, you probably have seen family and friends wearing flower bandanas with glistening eyes—yup, that’s a filter. To use filters, tap your camera icon, then tap your face. Snapchat will analyze your image, then bring up a carousel of filters where you can choose from a collection of fun characters you can mask over your face. They are cute and fun, and surprisingly addictive. 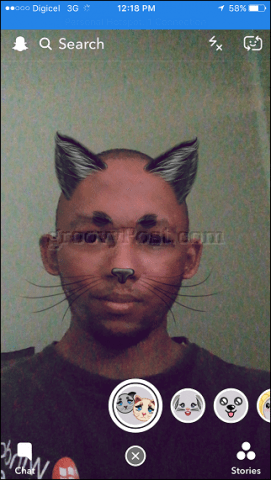 A recent feature added to Snapchat is Stories, which are short video clips you can watch, create or share with friends. Many celebrities and news media are embracing Stories as a way to boost their social media presence. 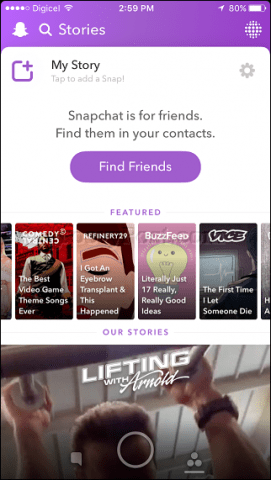 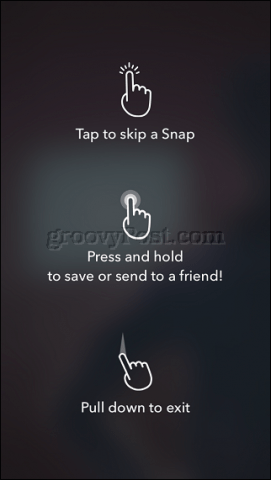 A section of the app called Discover lets users find new content from brands such as Vice, Daily Mail, MTV, Comedy Central, and Buzzfeed. Even the popular electronic periodical, Flipboard, is using Snapchat to publish articles in short format. This is strategic, considering the short attention span of many millennials. For me personally, I prefer a more traditional approach to consuming content, but if you just want a synopsis, this could actually be a refreshing way to stay up to date. 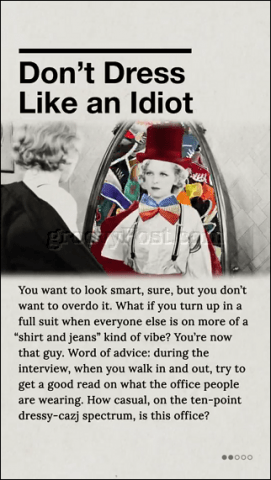 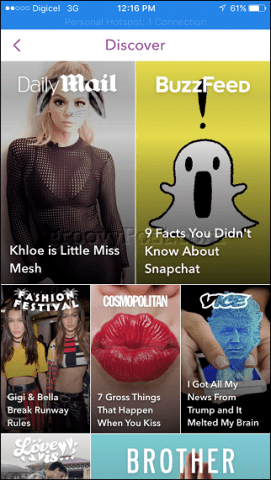 Snapchat needs to find new areas for growth and that likely means feature creep. The app is growing up and adding features around the clock. Recently, the company purchased emoji maker, Bitmoji, which lets users create their own cartoon avatars. Features like these generally appeal to a younger audience, which goes back to the core value of the app. They are more advanced than some of the features older generations are accustomed to on Facebook or Instagram, but I wouldn’t be surprised to see both eventually add similar features. Snapchat is trying to meet users where they are at—examples of this include the built-in text messaging feature. Users can chat with contacts, send pictures, videos, stickers and even make phone calls. This probably suggests Snapchat is aware of Facebooks own threat with its arsenal of social apps. 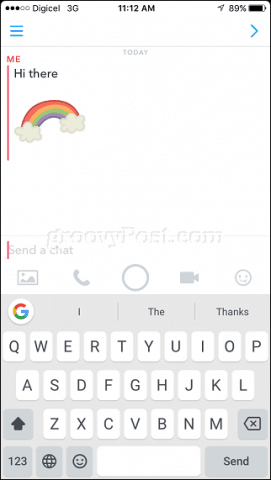 My personal take on Snapchat overall: it doesn’t really offer any must-have features that I don’t get from Facebook, Messenger, WhatsApp, Twitter or Instagram already. Those social networks are adding similar features found in Snapchat at a fast pace. Instagram and Facebook both have stories, stickers, and filters.  Another reason why I haven’t used it much is that it uses mobile data significantly. Facebook, Twitter, and Instagram are all free as part of my mobile data plans. Snapchat to me feels like it’s trying to do a lot and not necessarily perfect any of them or offer anything particularly advantageous.

Feeling unsatisfied with Snapchat overall, I asked a family member why Snapchat is so popular among his age group. He said it’s just a cool way to keep in contact with friends without the need to text message. Snapchat does include text messaging, but the primary means of expression and communication is visual. Is that really enough to make it a part of your social media tools? I’m not sure, to be honest.

Perhaps the largest appeal of Snapchat is the user base—younger users feel more at home here than on Facebook, which is where their parents and teachers hang out. Ironically, that demographic may be shifting. Facebook itself went through a similar period of exclusivity, initially requiring tertiary enrollment. As Facebook looked for growth a few years after launch, the company opened up to a wider audience. A similar trend is happening at Snap, Inc; the company’s recent IPO is a sign of big things ahead.

Are you a Snapchat user? If you decide to try it out, let us know what you think of it.