If you want to see how much battery you have left on your iPhone, you’ll want to show the battery percentage. This guide explains how.

Beginning in 2017, when Apple introduced the notch on iPhone, users couldn’t see their battery percentage at a glance. Instead, iPhone owners had to navigate different menus and screens to check the battery percentage.

Since the notch took up space, there wasn’t room to view the exact battery percentage at the top edge of the screen. So, the company cut back on the information shown, like time, cellular and Wi-Fi signal strength, and a rough estimate of power remaining—but not completely.

Starting with iOS 16 and above, you can show the battery percentage on an iPhone lock screen.

How to Show Battery Percentage on iPhone

Previously, you had to swipe down to open the Control Center to find the exact percentage of battery power remaining. However, the option to view the precise battery percentage at the top edge of the lock screen is back.

To show battery percentage on your iPhone:

If you don’t see the option to turn on the Battery Percentage feature, ensure your phone has the latest updates. When iOS 16 was first released, you could only use the feature on select iPhones. For example, you could get it on iPhone X but not iPhone 11 if you didn’t have the Pro version.

And, of course, the battery percentage feature was available on all models of iPhone 12 and newer.

Now, since iOS 16 has received several updates, you should see it on all modern iPhones with the notch and Face ID.

Just update your phone by going to Settings > General > Software Update to check and download the most recent version of iOS. 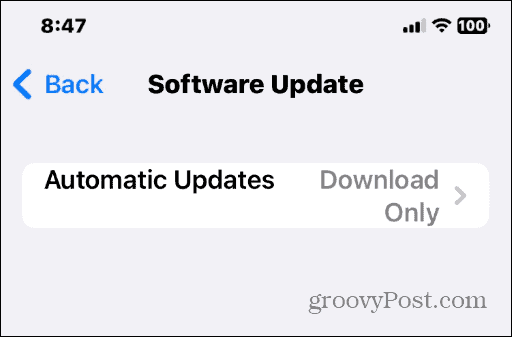 The good news is if you have a pre-notch iPhone like an iPhone SE or iPhone 8, for example, the models always show remaining battery power as an icon at the top right of the screen.

However, there is additional space you can put to good use and show the battery percentage. So while the older iPhone models should show the percentage by default, you might need to enable it. And turning it on is essentially like you do on the more modern models.

To turn on the battery percentage feature on pre-notch iPhones, do the following:

After following the steps, you will see the battery percentage number next to the Battery icon at the top right corner.

The look isn’t the superimposed number on the battery icon; instead, it is the percentage number sitting next to it.

Getting More from Your iPhone Battery

Whether you have a modern iPhone with a notch or an older model without, you can get the battery percentage following the steps above.

Once you enable the battery percentage feature, you can know how much of a charge your phone’s battery has with a glance. It’s easier to do than swiping through menus or installing a specific battery widget, although lock screen widgets improved with iOS 16.

Now that you can easily see the battery percentage, you can start enjoying the other benefits of your iPhone. For example, you can enable haptic feedback for the keyboard or reset the iPhone keyboard to fix annoying typing issues.

The camera is an essential part of your iPhone, and you might want to learn to take long exposure photos. Also, after taking your photos, you can make a photo collage on your iPhone.