Google’s YouTube site announced today that they are rolling out live streaming.  No longer will you be forced to watch pre-recorded media, now you’ll be able to see the raw footage without the fast forward feature or the ability to share it later on with friends.  To keep things social, YouTube has attached a chat room to each live stream, and normal comments aren’t even available.  The chat system works, but on more popular streams it is easy to get lost in the spam.

While this might not sound that exciting to watch your typical YouTube video uploader, live entertainment such as concerts, sporting events, and interviews that normally aren’t professionally published online will now have an outlet.  YouTube Live is stepping dangerously close to cable television, and thus far without any commercials; though DirectTV can rest easy until actual premium content starts showing up.  YouTube has yet to announce an advertising plan for their live service, so we’ll have to wait and see.

If you’d like to check out the live streams, head over to http://www.youtube.com/live where there are a handful of sample channels available – and don’t worry, only trusted YouTube uploaders currently in good standing are capable of streaming (and you can still flag inappropriate content). 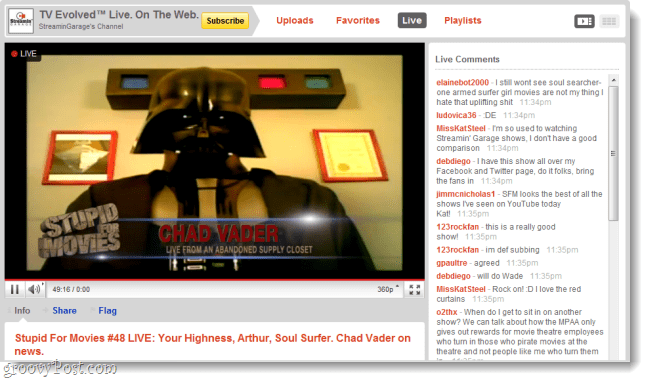