Google usually takes the spotlight when it comes to maps. However today Microsoft is giving them a run for their money, or at least trying to stay relevant in the “maps” space.

Early today Microsoft released a new Bing Maps Beta, live for public use.  This update packs in features they hope will captivate users.  However excited you may be before you jump in, you will need to make sure your browser supports Microsoft Silverlight as this new Microsoft flash competitor is what drives the new Maps app.

Bing Maps has a new welcome page bar; now you’ll be greeted by local weather information, local photos, and local Photosynths.  Clicking the See More Apps button from the application bar will bring up a huge list of new map applications that Bing has introduced <very groovy>.  The new apps range from a geographical Twitter search engine to a Live Traffic Cams.  My favorite is still the original Current traffic map. 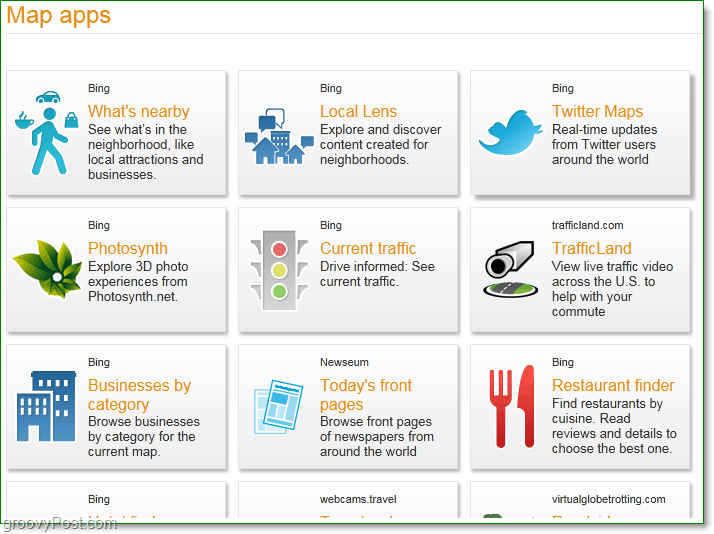 The other main updates I’ve noticed are a very smooth zoom, scrolling (thanks to Silverlight), and an Automatic function which switches to the best map style as you zoom. 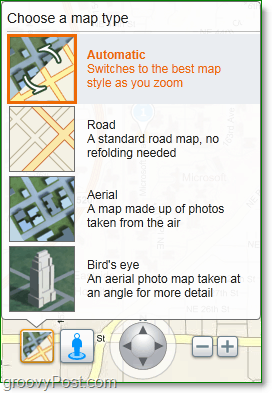 Overall the Bing Maps Beta provides four different options for browsing maps including the Automatic feature which chooses the best map for your level of zoom.  The Bird’s Eye map is one of my favorites, which so far is not available in Google Maps. 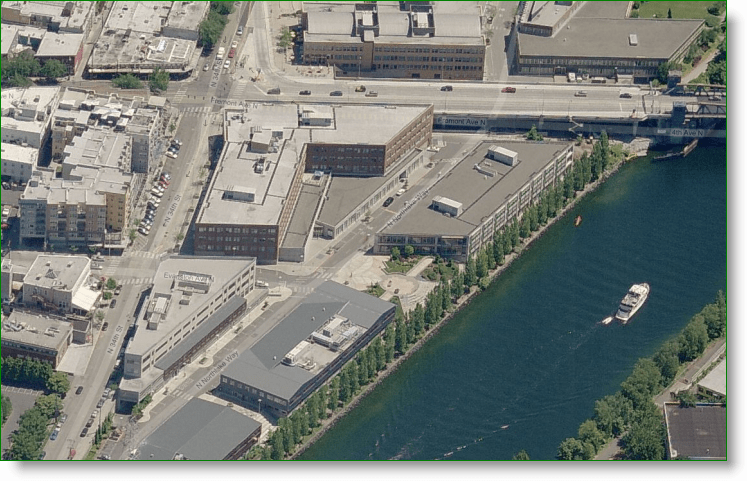 Next up on the navigation panel is the Streetside mode, Microsoft’s answer to Google’s Streetview.  After exploring the streets, it would appear Microsoft has a better picture quality that its competitor and again, leveraging Silverlight, the scrolling and zoom is also much smoother on the mini-map.  There were some glitches on performance while traveling down the road as many of the Polygons generated from the 3d imagery took extra time to load.  We’ll see if this gets fixed after the beta.  If you happen to see people walking down the sidewalk as you explore Streetside view, you’ll notice their faces are all blurred.  Microsoft has done this to protect privacy just as Google Maps has already implemented. 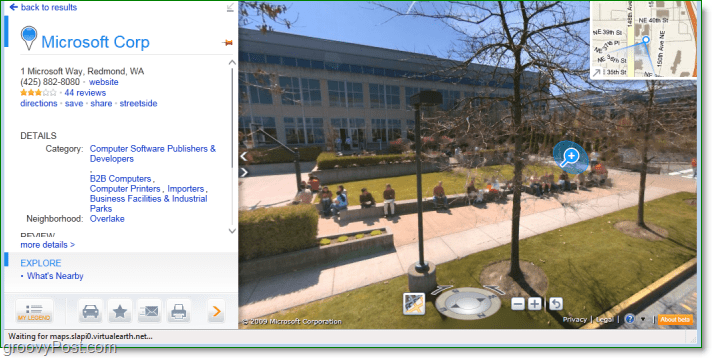 The downside to Bing Streetside mode – it doesn’t have near the imagery of Google StreetView.  If you’re curious just where all Microsoft has mapped, click the street mode button and look for the blue outlines. 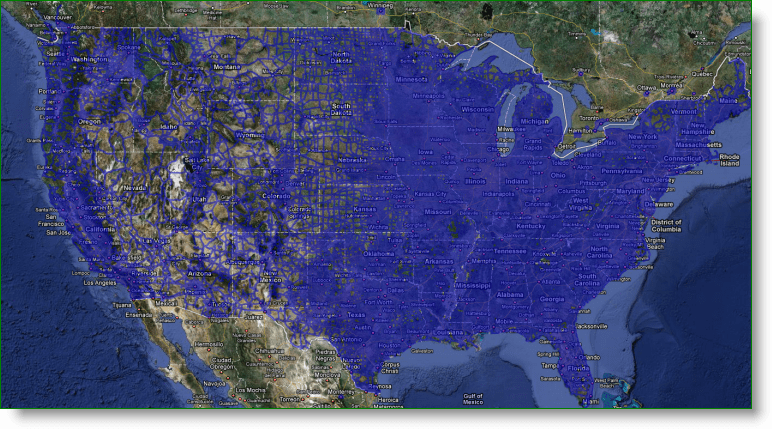 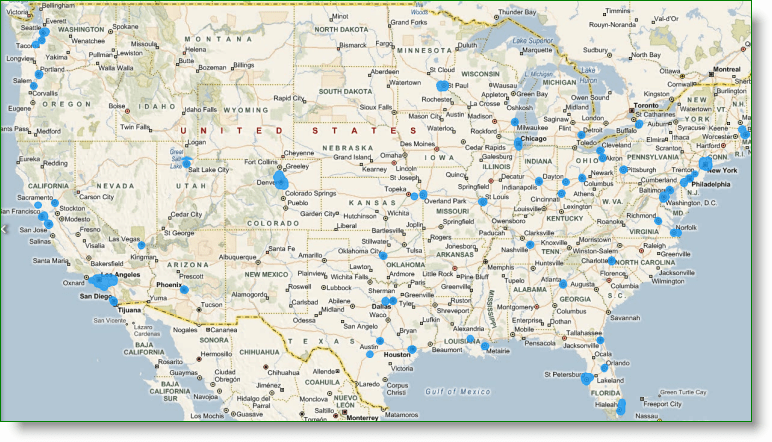 From a coverage standpoint, yeah, there’s no comparison (not to mention BING Maps StreetSide is U.S. only at the moment.)

Another groovy feature found in the aerial view (Look for the green markers) is the integration of Bing Maps and Microsoft Photosynth. 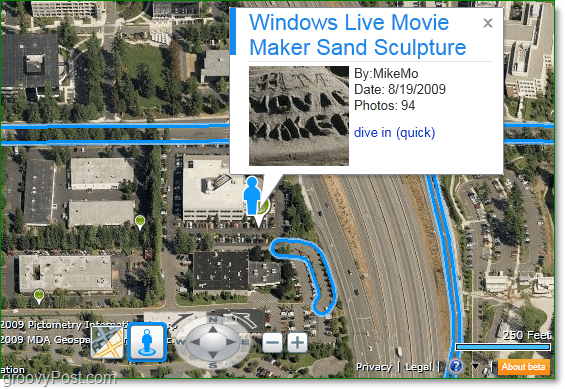 Photosynth is a technology introduced by Microsoft that allows users to collaborate multiple angled photos from a single event to create their own off-street view.  The rotation of the image will depend on the number of pictures and angles taken by users, but the recognition software will allow you to rotate around an image.  It’s not exactly Streetside view, but it doesn’t require a mobile camera vehicle either.  Honestly, it’s one of the grooviest things Microsoft has done in a long time.  I’m excited they’ve integrated it into their Maps software! 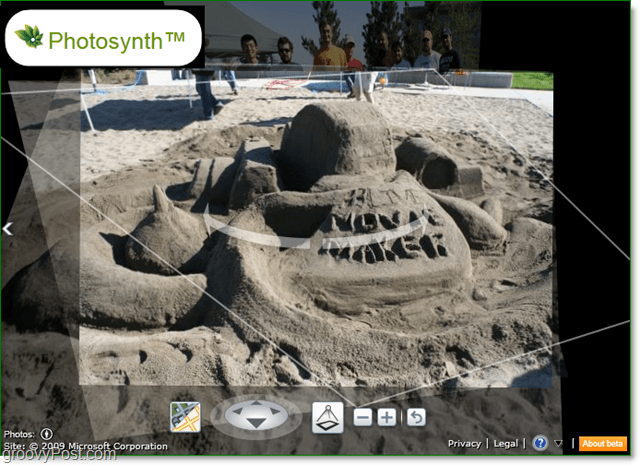 Heard enough?  Go try out the new Bing Maps for yourself!  We’d love to hear any comments or questions you might have either below or in the groovy community.