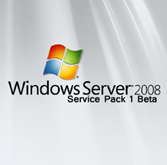 The Server 2008 SP1 promises better IT efficiency, new features, higher compatibility, Hotfixes, Security Updates and minor tweaks that will meet user expectations. As I’ve said before, Microsoft is currently rushing to release more updates and new software, while dropping support for older operating systems like Server 2000. We’ll keep you in the groove with related news as we hear about it!