Microsoft To-Do app is a cloud-based to-do list that’s actually worth switching to. And doing so for Wunderlist users will result in no major loss of features.

In 2015, Microsoft To-Do could not even be compared to Wunderlist. Most of the critical features, like subtasks and lists, were completely absent. Microsoft To-Do was like a poorly dressed-up version of Google Tasks, with barely any advanced features to speak of.

Four years later, the Microsoft To-Do app is a cloud-based to-do list that’s actually worth switching to. And doing so for Wunderlist users will result in no major loss of features. It’ll also provide a better-looking interface and an easy-to-use companion mobile app.

Why Migrate From Wunderlist to Microsoft To-Do?

The bottom line is that the writing’s on the wall. In September of 2019, Wunderlist Founder unofficially made an offer to Microsoft on Twitter to buy back Wunderlist.

Still sad @Microsoft wants to shut down @Wunderlist, even though people still love and use it. I’m serious @satyanadella @marcusash, please let me buy it back. Keep the team and focus on @MicrosoftToDo, and no one will be angry for not shutting down @Wunderlist. pic.twitter.com/27mIABncLF

The odds of this happening are slim. Microsoft To-Do development has advanced to the point where Wunderlist features are fully integrated, and there’s absolutely no pain for existing Wunderlist users to migrate over.

What are some of those critical features that Microsoft To-Do used to lack?

The ability to group lists into categories is one of the main reasons I personally avoided Microsoft To-Do in the early days.

Since many people have multiple areas of their life that they need to organize, the ability to group multiple lists together under a single label is critical. Microsoft To-Do now features a small button with a + icon in the corner that lets you create and name a new list group.

Then you simply drag individual lists into that group. 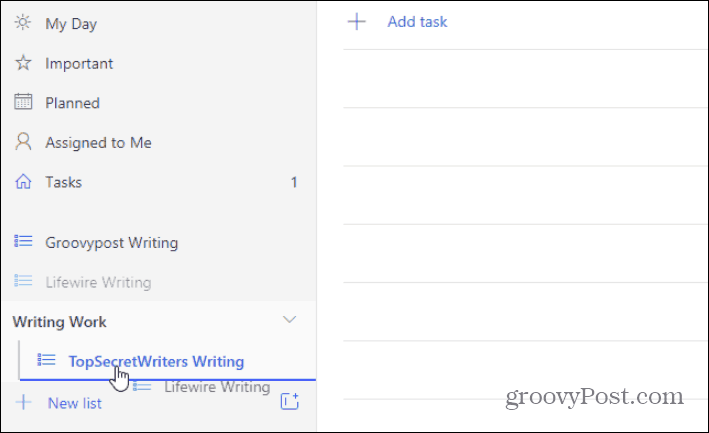 You’ll see that the list group includes a collapse icon so that when you’re not focused on working on tasks in that area of your life, you can collapse the group and keep them out of the way.

This appears and works exactly as the task folders did in Wunderlist.

The ability to repeat a task was surprisingly lacking from Microsoft To-Do in 2015. This was a major reason most users couldn’t possibly migrate over to Microsoft To-Do. Today, this is no longer the case.

When you select a task, you’ll see a menu show up on the right with all of the task options. Select Repeat to assign a recurring timeframe for that task. 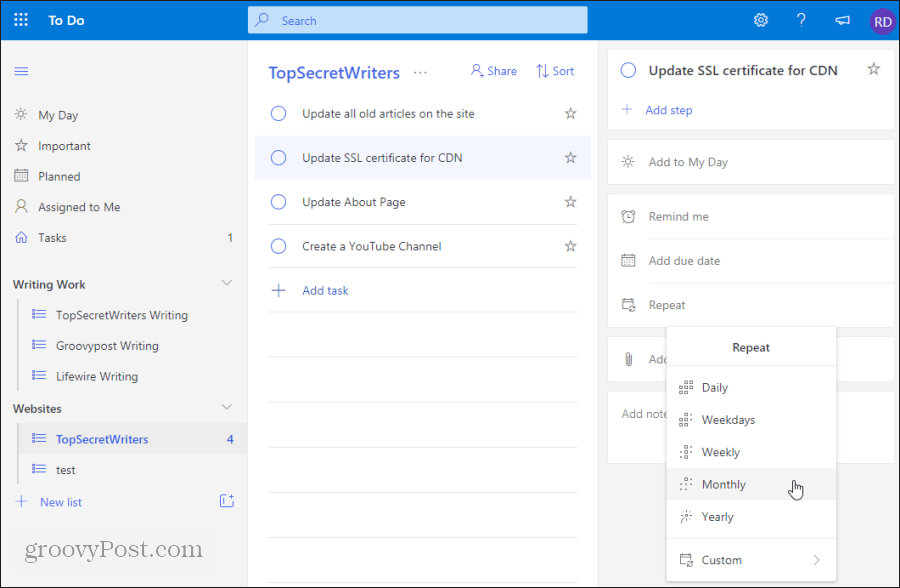 Another critical feature that Wunderlist offered was the ability to build subtasks inside of tasks. This is important because a few tasks you’ll have aren’t without some series of steps that you’ll need to work through to complete the task.

Microsoft To-Do finally added this feature to the right menu when you select a task. Just select Add step and type the name of that step. Hit enter to move to the next step and continue until done. 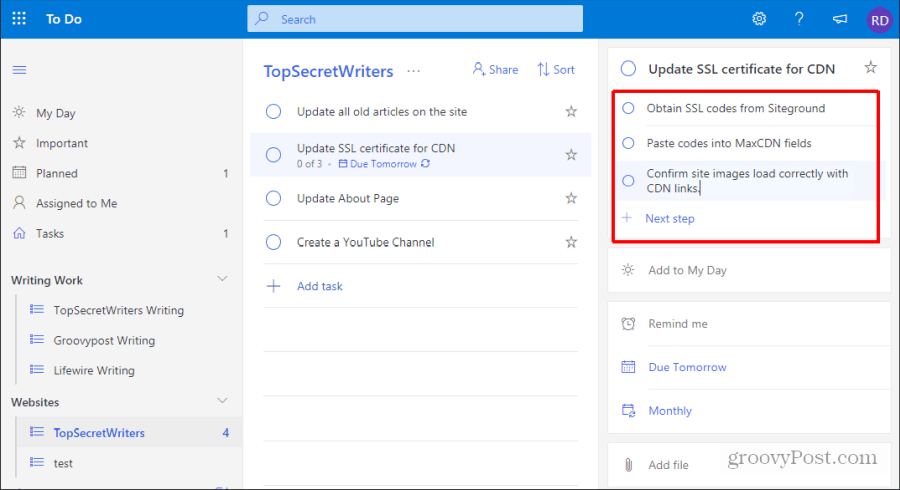 When finished, you’ll see a count of the tasks in the main task description (a feature lacking from Wunderlist).

Another important Wunderlist feature that’s now available in Microsoft To-Do is the ability to select a task and add notes into a note field in the menu on the right. 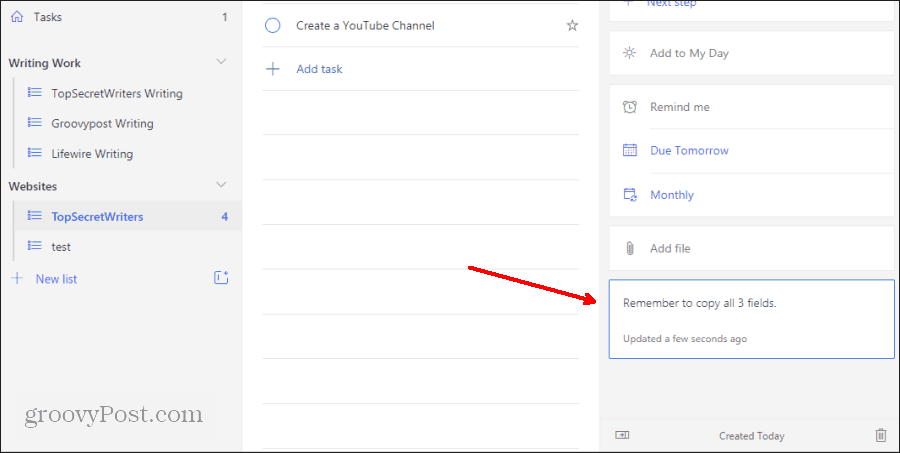 This is a good place to keep random information like a guide or links you may need to perform that task. 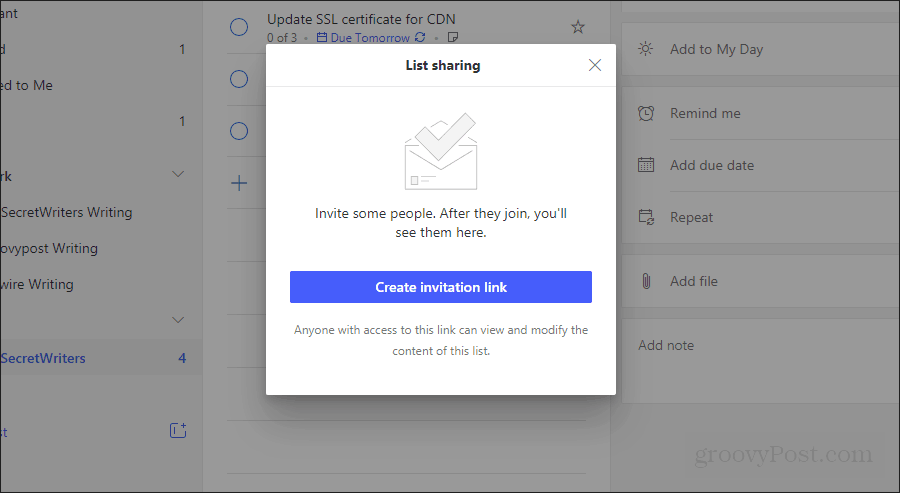 Collaboration on lists lets you assign and get assigned tasks. All of your assigned tasks will show up under the Assigned to Me menu item at the upper left of the main Microsoft To-Do window.

The truth is that, four years later, all of the features you loved about Wunderlist are finally all available in Microsoft To-Do. There’s really no reason you shouldn’t migrate over now.

How to Migrate Wunderlist

If you’re ready to import all of your information from Wunderlist, now is the time to do it. The process is quick and very simple.

Select the settings icon at the upper right corner of the Microsoft To-Do page and select the Import button under Import from Wunderlist. 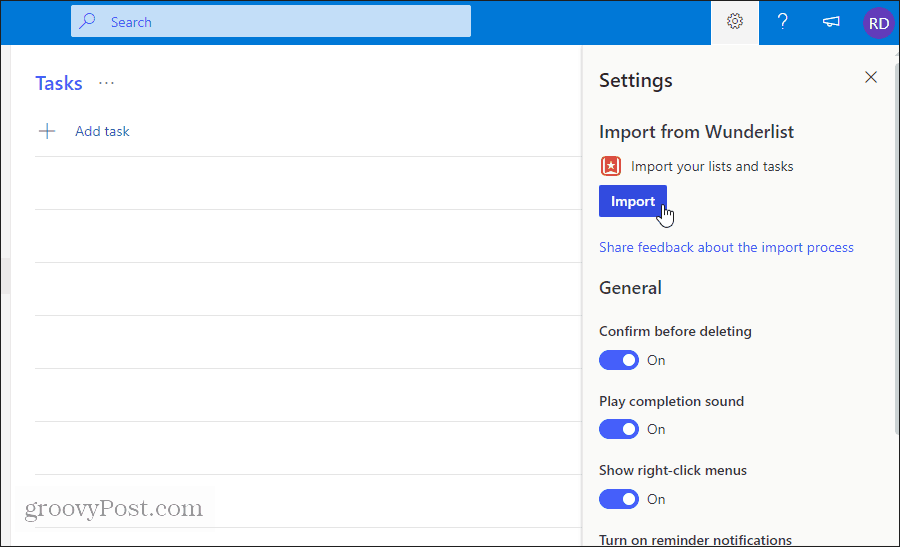 In the first step of the process, you’ll see the Wunderlist account that Microsoft recognized under your email address. If this isn’t correct, just select Switch to another account and sign in. 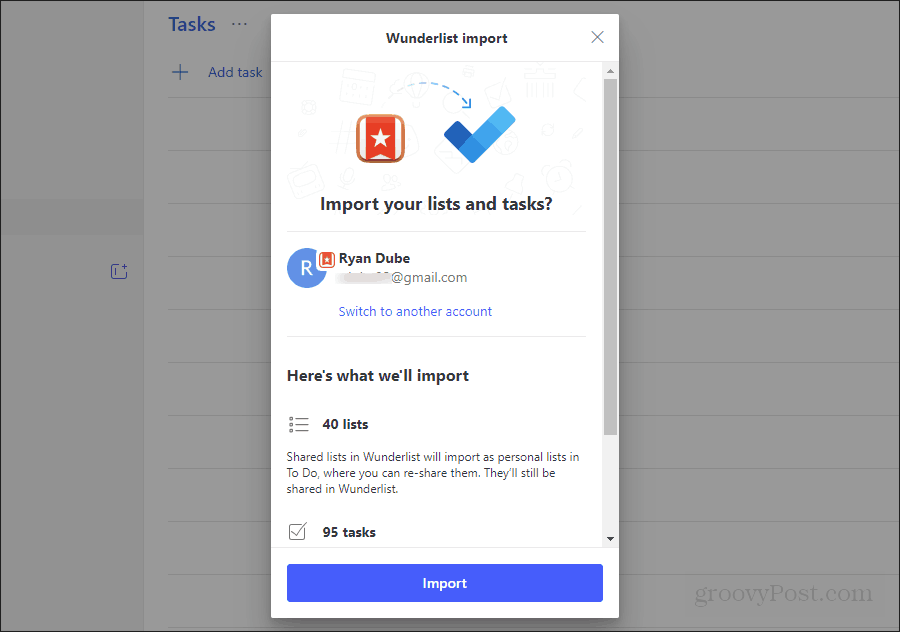 Select the checkbox to import the completed items as well, if you want. Then select the Import button when you’re ready.

You’ll see a notification in the lower-left corner of the Microsoft To-Do window showing that the Wunderlist import is in progress.

Once the process is done, you’ll see the status change to Finished importing your lists and tasks. Dismiss the notification, and the import process is done!

Now you’ll see all of the tasks and lists you had in Wunderlist imported into Microsoft To-Do. Everything will be organized and configured exactly as it was in Wunderlist.

This includes all tasks, lists, groups, recurring settings, and any other task settings you had configured in Wunderlist. The only item that won’t import is whether lists are shared or not.

Once everything is imported, there’s really no reason to continue using Wunderlist. It may be a good idea to keep your Wunderlist account active while you’re getting accustomed to Microsoft To-Do, though.

But at the very least, once the inevitable day comes when Microsoft retires Wunderlist, you’ll have nothing at all to worry about.