If it’s one thing I have learned about task list apps such as Google Keep, iOS Reminders or Outlook tasks, if you don’t remember to use them, they are pretty much useless. That’s not stopping Microsoft from introducing a new app focused on simplicity and integration with the company’s Office 365 platform and supercharged with artificial intelligence and machine learning.

To-Do is an entirely new app from the same developers behind Wunderlist, an app/service Microsoft purchased a couple of years ago and will now retire once all its features have been ported over to To-Do. In this first launch/preview, To-Do is available in a Web client as well as iPhone and Android. Let’s check it out.

The interface features a clean design focusing on your tasks list, which includes completed and upcoming tasks. Tasks can be broken down into categories, whether it’s for Work, Home or another scenario such as grocery list or equipment for a kitchen renovation. New tasks lists can even be created from existing items.

To-Do helps you create a list for anything—for work, home projects or just your groceries. You can keep track of deadlines by adding reminders, due dates, and notes, and personalize each list with colorful themes. You can access your lists from anywhere with the To-Do apps for iPhone, Android phone, Windows 10 devices and the web. Source

Microsoft designed To-Do to focus on your day; if you have a backlog of tasks to complete, you can pick and choose from your list for the day. This makes the service feel flexible than the rigid top to bottom approach. Integration with Microsoft’s existing services and apps such as Outlook is another great way to start off with To-Do. You can sync existing task lists and benefit from secure encryption technologies already built into Office 365. 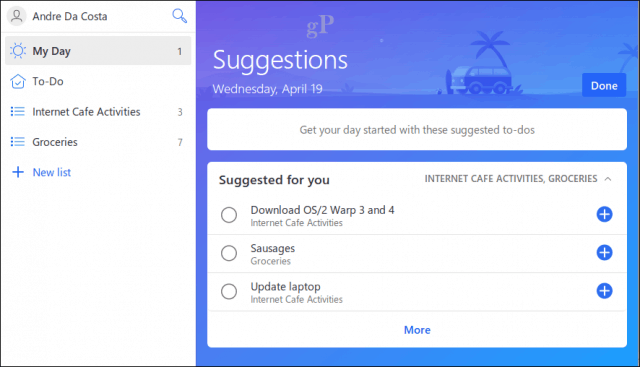 Functions like searching through your list are also available and the service seems to add a bit of personalization based on your location. I will be exploring the app some more and test it out later this week when I go into town. There seems to be a minor bug when trying to chase the due date on tasks. Instead of moving the due date to tomorrow, it remained stuck on today. I keep saying it, but I really like the clean interface a lot. You can add items, easily move them or down to prioritize or use the built-in Sort filter. 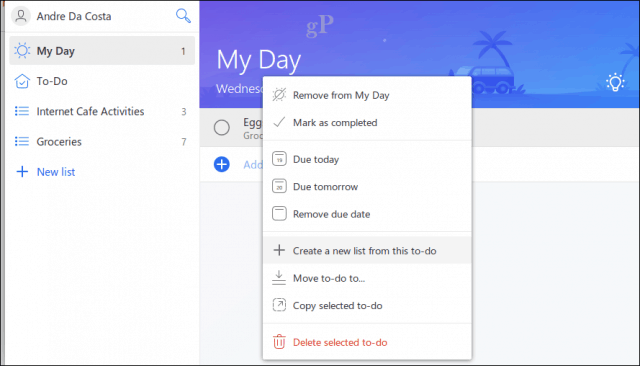 Although the preview is currently limited to the web, iPhone and Android smartphones, Microsoft is already planning updates to support devices such as the iPad, Android Tablets, and even the Mac. Users can give it a try now by simply signing in with their existing Microsoft account then start creating a new list and add your to-do’s them. 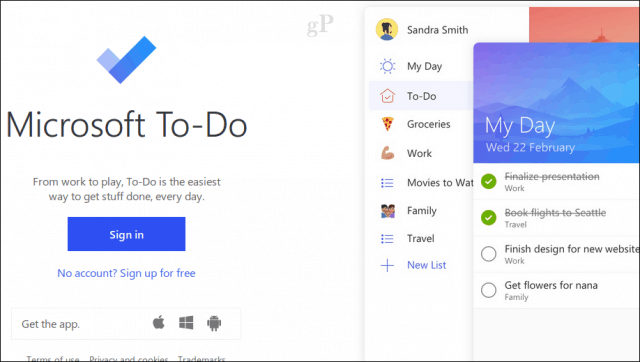 I have Wunderlist on my iPhone, but I probably opened the app just a couple of times. This low interaction is likely due to the chore-like nature of remembering to use the app. Right now, I manage to do’s and reminders across a variety of solutions: text-based notes, sending myself email reminders and searching the old noggin. Microsoft’s new app seems interesting though, the clean interface is particularly, attractive and that just might encourage me to make a concerted effort to use it. Being that Microsoft plans to add a deep level of integration with Microsoft Outlook, this might just be exactly what I need to consolidate into a single platform.

Microsoft continues to flex its AI and Machine Learning muscle across its Azure and O365 platform with Microsoft Delve, Clutter, Focused Inbox and Cortana. According to its blog post, To-Do will also be enabled with this tech. Here’s a snip from the release notes that dive into some of the capabilities getting shipped with the preview.

Managing your to-dos and lists can sometimes take as much effort as completing them. To-Do helps you focus and plan your day from the moment you open the app. Every morning, your My Day list starts out with a clean slate, allowing you to be more intentional about what you want to get done.

You can also tap Intelligent Suggestions for ideas on what’s most important. Just tap the lightbulb, and you’ll see any to-dos from the day before, what’s due or upcoming, and other helpful suggestions based on To-Do’s smart algorithm. Just add the ones you want to get done to My Day.

Not sure about you, but, although a little scary, this is extremely exciting stuff!