While Firefox and Chrome continue to gain market share over IE, Microsoft is getting closer to releasing their latest browser Internet Explorer 9 (IE9.)  Although they are still a good distance off from their first beta, the test drive preview gives us a good idea of just how fast we can expect IE9 to be.

Honestly, it’s a surprise that Microsoft hasn’t renamed the browser to something more original like Bing for instance.  Regardless, IE9 is on its way.  My first concern was the slower performance speed experienced using Google and Bing maps, but this puppy is fast.  I was able to zoom in on the famous Seattle Space Needle in 2 seconds flat using the IE9 test drive and Bing maps preview.

The new Javascript benchmarks are in from Sunspider, and things are looking good for Microsoft so far, and they plan to get better. 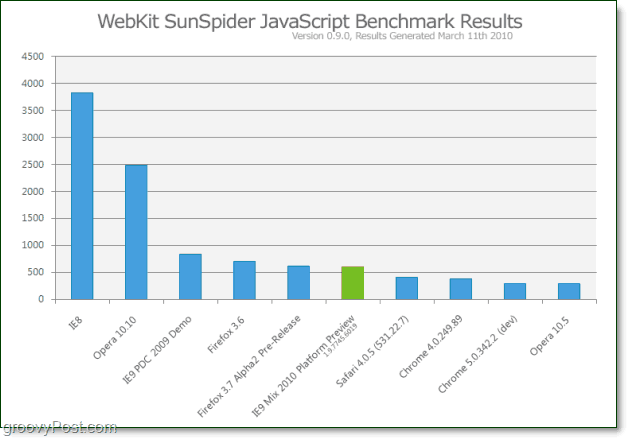 Even though this is still a very early preview, they have HTML5, hardware driven Javascript, CSS3, and Hypertext Markup Language nearly completely functional for basic functions.

Microsoft knows they still have a long way to go, like their stance on release says:

When will the first beta of IE9 ship?

Their primary focus, for the time being, is developer feedback.  After the huge mistakes made with IE8 Microsoft is paying attention to exactly what developers want this time around, hopefully, this will mean an end to using Compatibility Mode (and the much-needed death of IE6???)

Check out the IE9 Platform Preview at http://ie.microsoft.com/testdrive/. After playing around with it be sure to post your comments/thoughts/feedback here!