Need an older version of Windows 10 such as version 1507 or 1511? Here are some of the ways you can still get these older releases.

The reality is starting to set in that future releases of Windows 10 might not support older computers. Microsoft confirmed the Creators Update and Fall Creators Update will not work on computers using the Intel Clovertrail Atom processors. The company instead is planning to support version 1607 – also called the Anniversary Update – on such devices until January 2023. Hardware vendors such as Dell, HP, and Lenovo currently maintain databases of systems that support a particular Feature Update or not.

Many users embraced the software as a service model promoted by Microsoft during its early launch, expecting new versions of the OS to be smooth sailing. It has turned out to be quite the opposite in many cases. Which brings us to the subject at hand—how do you obtain older releases of Windows 10 that do support your hardware and applications? It turns out, your options might be limited, but let’s investigate.

Starting with the Creators Update, the company still hosts ISO files for Windows 10 1607 because a wider range of new systems still support it. Application compatibility can be an obvious reason why you want to stick with older releases, too. But what if you are running version 1511 or 1507 then you upgrade to either 1607, 1703 or 1709; and it turns out your system doesn’t work as well it used to? You will need a way to go back to the older version to at least have a functioning system. You can rollback a Windows 10 upgrade, but you have to decide to roll back within 30 days of upgrading.

Let’s start off with the expensive options for obtaining older releases. If you subscribe to one of Microsoft’s commercial licensing programs such as Volume Licensing or the Microsoft Software Developer Network, you do have the option to download older releases. MSDN, for instance, keeps versions as far back as the initial release.

MSDN is an expensive option, so is Volume Licensing, which is more appropriate for large organizations. If you do have access to either though, it’s one of the first options to consider.

I mentioned earlier that the Microsoft Software Download Page has started hosting older versions of Windows 10 as far back as 1607. It’s a start, but it might just be what you need if the Anniversary Update – which Microsoft plans to support until 2023 – supports your hardware and applications. 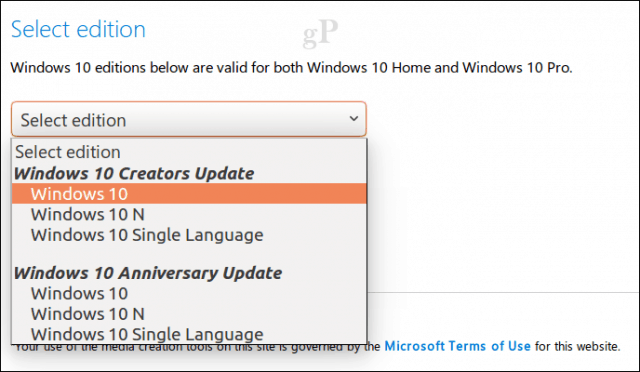 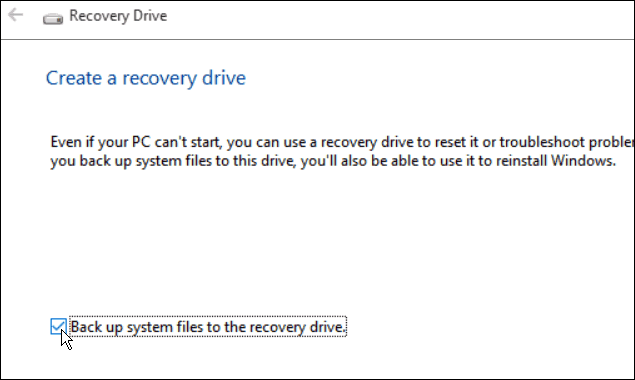 Microsoft no longer hosts older versions such as 1507 or 1511, that’s perfectly clear. But that doesn’t stop third party websites from taking the liberty of doing so. The website, windowsiso.net keeps a repository of all releases of Windows 10 as far back as the first release. Users can download Windows 10 1507, 1511, 1607 and 1703 in both 32 bit and 64-bit architectures and languages. The site stands behind its downloads by pointing to verified MD5/SHA1 hashes taken from Microsoft.

If you choose to go this route, you can download the ISO file then verify its integrity using the Slavasoft’s HashCalc MD5/SHA1 verifier covered in our previous article. It’s a convenient option if you do need that older release. 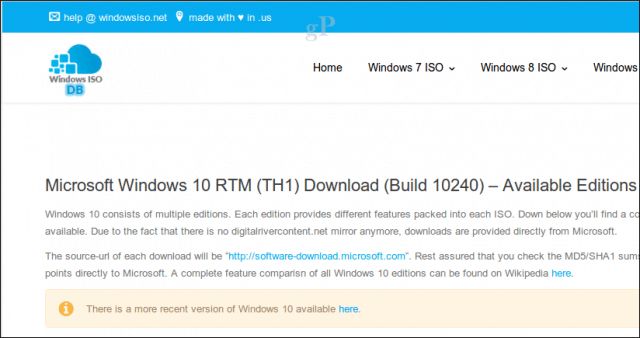 Torrents can sound like a bad word most of the time, but sometimes, it’s a valid one when others have been exhausted. No doubt, users should proceed with caution. When downloading ISO files from a torrent for older versions of Windows 10, you will need to verify the integrity of what you downloaded. An ISO file could easily be injected with malicious code, so, it is recommended you check the MD5/SHA1 in addition to scanning the contents of ISO file after downloading. But, consider this option as an extreme last resort.

So, those are your options if you desperately need those older reasons for one reason or another. Another option I almost forgot to mention, if you know a trusted friend or family member who might have a backup copy, you can use that too. Remember, Microsoft has dropped support for these older releases. This means they are subject to attacks that Microsoft has no intention of fixing.

Do you foresee needing older versions of Windows ISOs in the future? Let us know why in the comments below.