Emoticons and emojis seem to be more popular now than they ever were. However, they aren’t everyone’s cup of tea. If you use Skype, here’s how to stop them.

Emoticons or emojis are quite popular these days. So popular, in fact, that they are one of the major attractions in Apple’s latest iOS 8.3 update. We’ve even shown you how to enable the emoji keyboard in Android.

While popular, they don’t appeal to everyone, especially during the workday while trying to get things done. If you’re a Skype user and annoyed by emoticons in your IMs, you can disable them, but there’s a bit of a catch.

Go to Tools > Options IM & SMS and then select IM appearance. In the right pane uncheck Show emoticons and then Save.

This will stop emoticons from showing up in your IMs and disable them in your screen too so you can’t send them.

As I mentioned previously, there is a trade-off with this though. Instead of seeing the actual emoticons, animated or not, you’ll see the “behind the scenes” text of each one.

You can see in the shot below, the emoticon text can be just as annoying, especially if someone tries to send you an emoticon in the middle of a sentence or conversation. 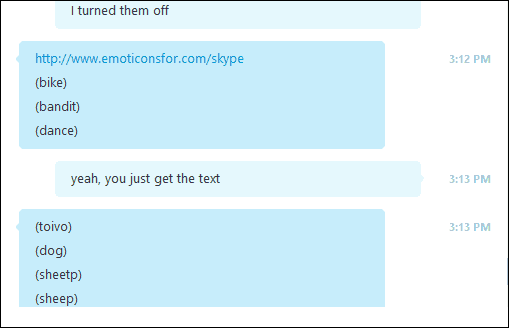 What’s your opinion of emoticons and/or emojis ? Love them or leave them? Let us know in the comment section below.