Licensing Windows 10 has evolved since its July 2015 debut. Initially, Microsoft delivered Windows 10 as a free upgrade for existing Windows 7 and Windows 8 users.

Update: We originally wrote this guide for the Anniversary Update, but it works for current versions, too.

This created some inconvenience for users who initially wanted to perform a clean install. Once Windows 10 was activated, users were free to reinstall and reactivate on the same hardware to their heart’s content. Windows 10 November Update or 1511, made the process much easier and transparent. Users could skip the two-step process and perform either a direct upgrade or clean install; using just their Windows 7 or Windows 8 product key. Now that the Windows 10 free upgrade offer has ended, Microsoft is making product activation even easier by linking your Digital license to your Microsoft Account.

Previously called Digital Entitlement, when a computer is upgraded from a previous version of Windows; it receives a unique signature of the computer, which is stored on Microsoft Activation Servers. The Windows 7 or Windows 8 genuine license your system was previously running is exchanged for a diagnostics key.

With Digital License, there is no need to know your product key or purchase another product key if you lose it. Anytime you need to reinstall Windows 10 on the same computer, just proceed to do so using any of the available options. Windows 10 will automatically reactivate without asking questions. The only exceptions where the license will be invalidated is dependent on the product channel. If you were previously running an OEM Windows 10, Windows 7 or Windows 8 license; then changing the motherboard will cause the Digital License to no longer work. This will require purchasing a new license. Transferring licenses upgraded from Windows 8 or Windows 7 under the Windows 10 free upgrade is also not allowed under Digital License.

You can still reinstall Windows 10 using a Windows 7 or Windows 8 product key or use the reset function. If prompted to enter a product key during setup, click I don’t have a key or Do this later. 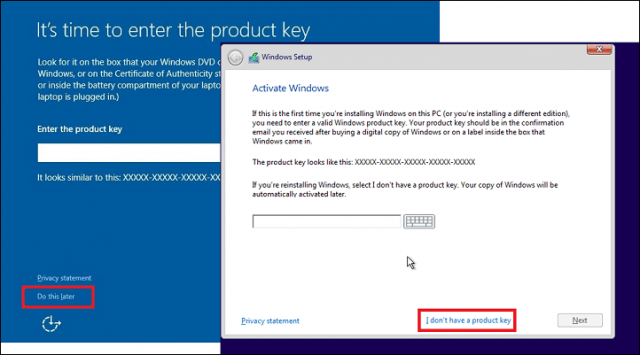 If you recently upgraded to Windows 10 before the free upgrade offer expired, a digital license should be attached to your device. Microsoft is making the digital license a bit unique by linking activation not only to your hardware but also your Microsoft Account. This will not only make activation easier but troubleshooting common scenarios involving hardware modifications and upgrades. 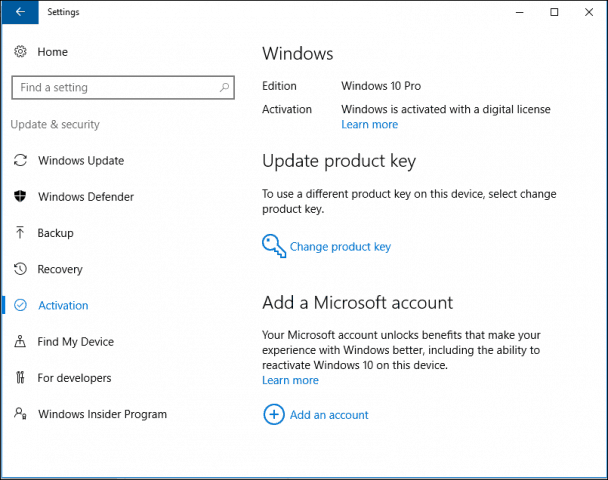 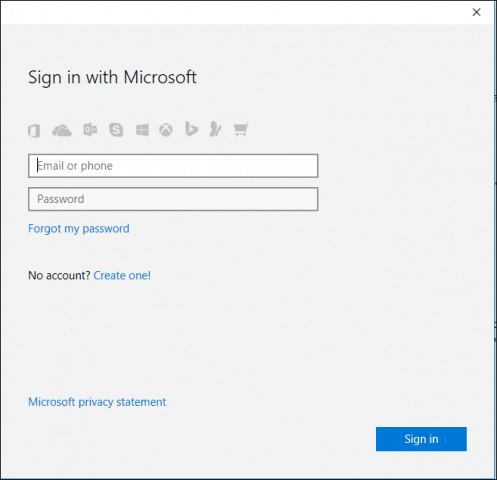 After signing in, Windows 10 activation status will now display Windows is activated with a digital licensed linked to your Microsoft account. A mouthful I know, but this is how Microsoft will reduce the need always to know that 25 alphanumeric product key users are accustomed to losing or misplacing. 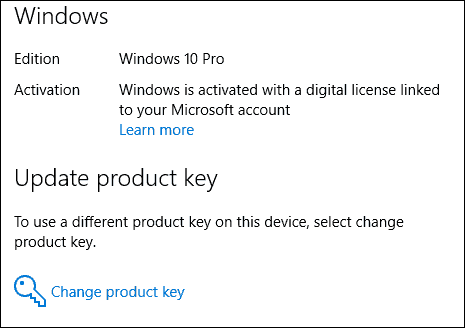 There are some interesting scenarios where this is especially beneficial. The most obvious is when you need to reinstall Windows 10. The process is quite uneventful; I was not even able to try out the troubleshooting option initially because it works so efficiently. Windows 10 just reactivates automatically once your hardware signature is detected. I found another welcome discovery too; Digital License permits activating installations using the same license in dual boot configurations, on the same machine.

I was able to set up another partition, install the Windows 10 Anniversary Update there and it activated without issue. My installation on the boot drive was not affected. This is especially ideal for users who might want to have an extra installation for testing or compatibility. For Windows Insiders, it is especially great if you only have one machine and would like to avoid sacrificing a production install to test the latest Windows 10 builds.

If you do encounter a scenario where you need to reactivate Windows 10 after a hardware modification, here is how it works. Click Start > Settings > Update & security > Activation. Click the Troubleshoot link. Please note, if you made a significant change such as a motherboard, this might still require contacting chat support or phone activation. 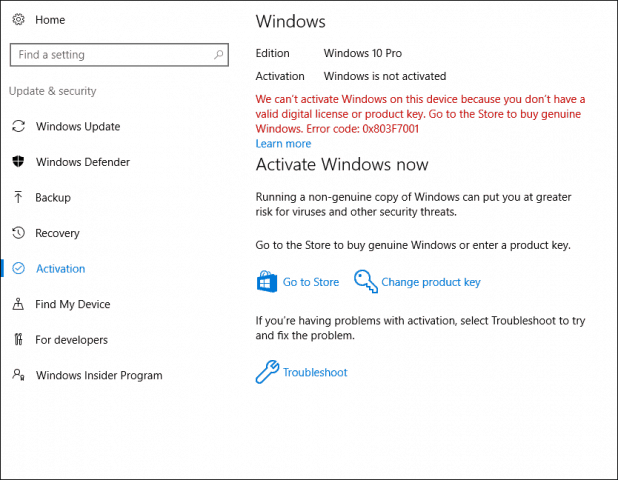 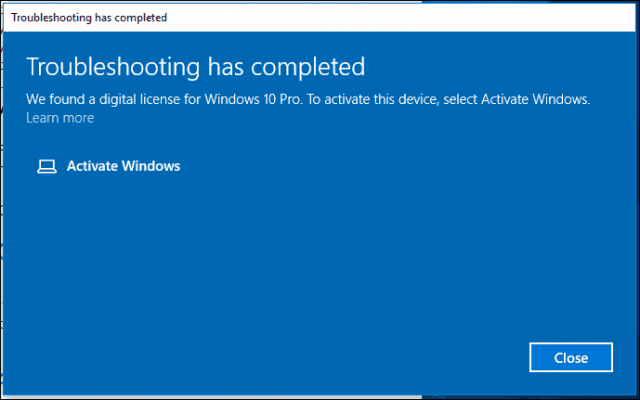 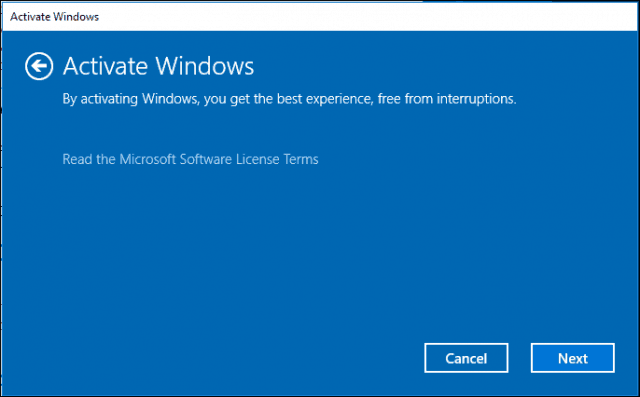 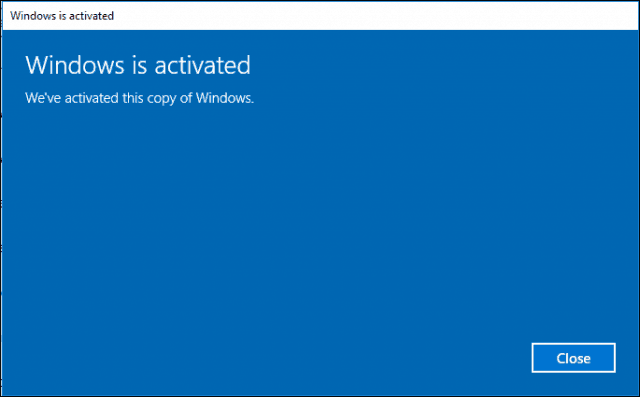 A feature by design introduced as part of activating Windows 8 product keys, which are embedded in the BIOS Firmware. This made reinstalling and reactivating systems easier. For users who decide to upgrade to Windows 10 and choose a premium business edition such as Windows 10 Pro; this can result in issues during reinstallation. If the user performs a factory reset or attempts to reinstall Windows 10 Pro using the Media Creation Tool, because the OA3 product key is designed to choose a specific edition during installation, the intended edition is not installed. Users can work around this by using the Windows 10 Pro diagnostics key to upgrade to Windows 10 Pro.

The troubleshooting wizard in Windows 10 Anniversary Update takes care of this by detecting previous Windows 10 Pro licenses attached to the device. The wizard will automatically offer the option to upgrade your installation to right edition. 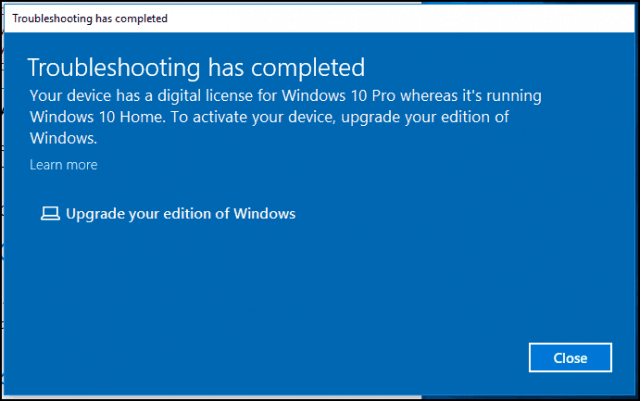 Of course, this is just one of many solutions available for activating Windows 10. Chat support, introduced in Windows 10 also makes it easy to get your Windows 10 license reactivated. If that fails, users can turn to phone support. Have you been experiencing problems with Windows Activation since upgrading to Windows 10? What do you think of the new changes? Let us know in the comments.