10 years ago, we saw the first iPhone launch event which introduced a number of groundbreaking features that we take for granted today.

In January 2007, Steve Jobs opened a Pandora’s box that forever changed the technology industry. He called it the iPhone. Not only did it destroy previously popular brands (Blackberry, Nokia, Palm), but it also germinated new modes of commerce—gig and sharing economy (Uber, Lyft, AirBnB) and payment services (Apple Pay, Square)—and transformed the way we document our lives (Instagram, Twitter, Facebook).

This week marks 10 years since the first iPhone went on sale. I decided to take a look back at the iPhone launch video from January 2007 recorded at Macworld. There are some interesting tidbits about the first iPhone back then and they sometimes contrast with today’s modern version of the device in surprising ways.  Here are 10 interesting facts about the original iPhone from that presentation. 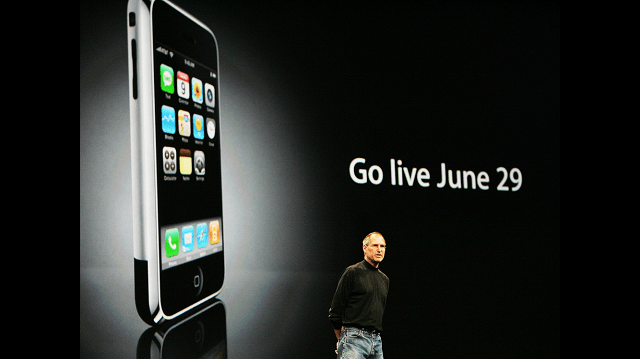 A Look Back at the iPhone 2G 10 Years Later

Steve Jobs told the audience the iPhone ran OS X, but further details revealed, official branding for the mobile OS was iPhone OS. Apple kept this name until iOS 3.0 was introduced. iPhone OS supported many of the technologies perfected in OS X, such as: Networking, Power Management, Display Postscript. It really made the iPhone a computer in your pocket. 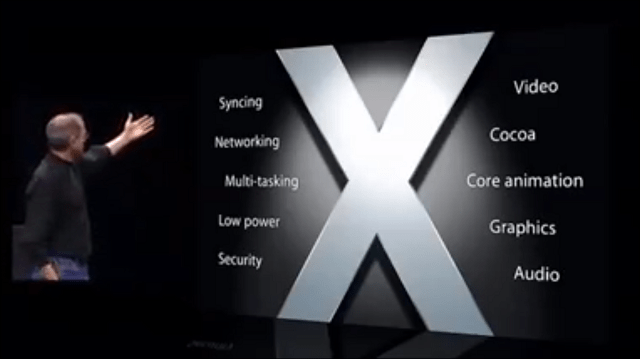 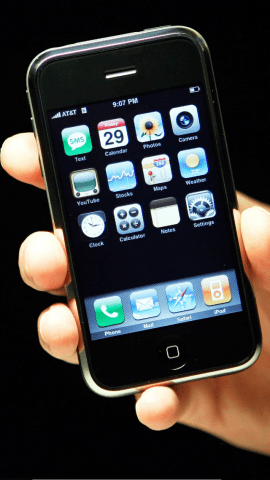 2. Network Technologies were limited to Edge/Wireless/Bluetooth 2.0 and Cingular

Today, we take for granted the fast speeds our smartphones include to deliver all sorts of rich multimedia experiences, such as: Facebook live streams, Snapchat, Instagram, Spotify and other bandwidth-intense tasks. Activities even on Wi-Fi might have been impossible due to the still maturing network technologies at the time. Unless you had access to a fast wireless network, the limited Edge cellular network was frustrating to use when loading even the most basic web pages. The iPhone wouldn’t get a network boost until the iPhone 3G a year later. 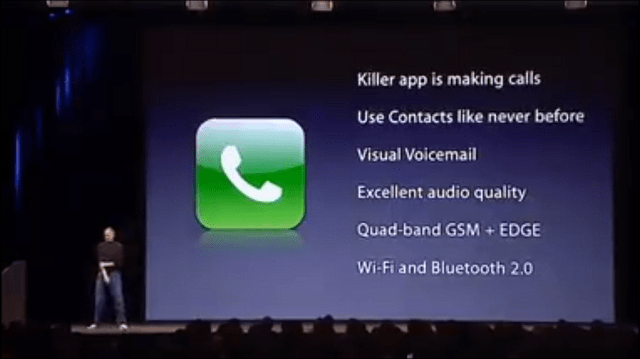 Apple’s initial network carrier, Cingular, which later merged with AT&T was the first to bet on the iPhone. This partnership gave Apple the opportunity to have carte blanche over the iPhone while AT&T provided the network support. The limitations of this partnership possibly held back the iPhone from its full potential since it made the device exclusive to AT&T’s network for 3 years before it was launched on Verizon for the first time in February 2011. The iPhone only supported GSM initially, CDMA networks would not be supported by the iPhone 4 in 2010. 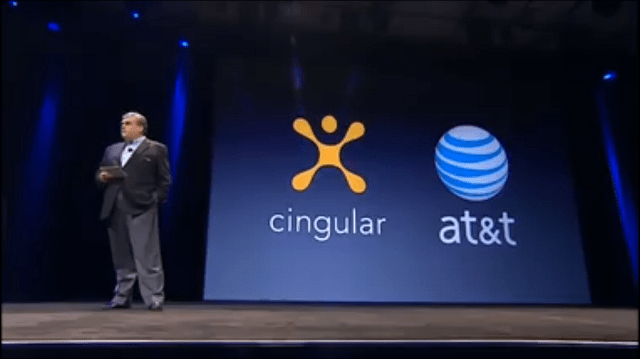 With the success of the iPod in 2001, Apple became more than just a computer company. Anything tied to the popular MP3 player’s brand was a great halo effect to have. Steve showed it off in great detail, calling it the best iPod the company ever made. In fact, the music icon was represented by an actual iPod. Itunes integration was also emphasized, which made using the iPhone feel second nature for first time users. 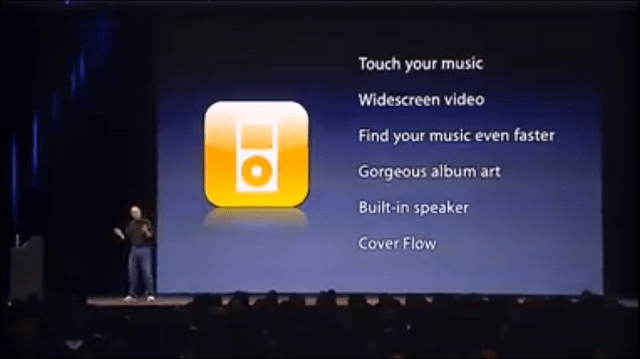 Later it would be replaced by a musical note, starting with the first iPod Touch. The iPod (music) app, featured an interface built around album art and the ability to touch your music. The iPhone combined recent iPod additions, such as a widescreen video player for watching videos and movies. 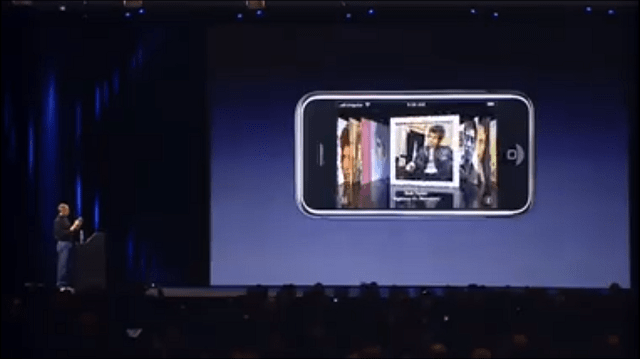 In 2008, the slogan there’s an app for that became popular with the opening of the App Store. A year earlier, Apple kept a no third party app policy; fearing that opening up the iPhone to developers might make networks an easy target for hackers and performance issues. Apple’s initial attempt at third-party apps was through web apps based on Safari. Eventually, Apple would relent, but the first iPhone did include a few third party apps from a couple company’s, one which would become it’s biggest competitor.

The YouTube video app originally came bundled with the iPhone, represented by a funny 50’s style TV set. This is probably where the world’s appetite for viral videos started. Google also made the original Maps app, which Steve gushed over. Six years later, YouTube and Maps would be kicked off the iPhone. Apple instead, replaced Maps with its homegrown solution which was promptly greeted by thumbs down.

Google still develops YouTube and Maps for iOS, including a laundry list of other apps and services. Yahoo! was also another early exclusive app developer for the iPhone, providing stock and weather information. It too would be replaced by other technologies powering these services. 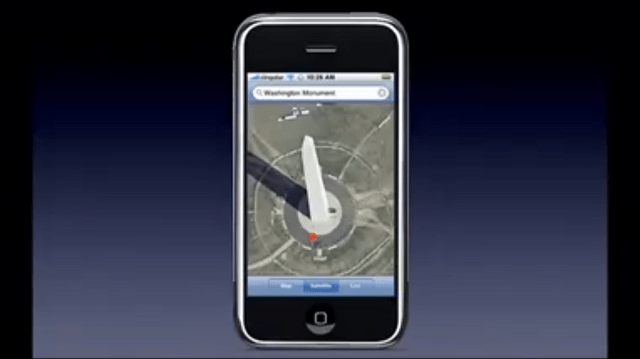 5. Not All Apps on the First iPhone Were Called Apps

Some of the icons on the iPhone home screen were not actually described as apps. Instead, they were known as widgets; a cross over from the dashboard widgets that came with the company’s desktop operating system. The Clock, Weather and Stock icons were three apps, that were described as widgets during the iPhone presentation. 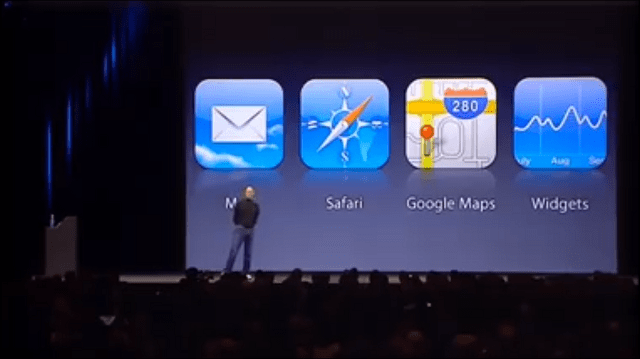 I wasn’t able to confirm if this was a feature in initial releases of iOS, but I checked my iPod Touch running iOS 5.0 and the included Mail app doesn’t have a split screen feature. Steve Jobs indicated he liked the full view more, so he probably axed it before the final product was released. 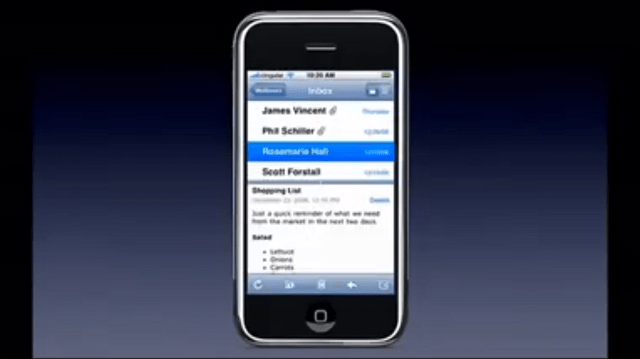 7. Before iCloud, there was Yahoo Mail and Gmail

When the smartphone landscape became aggressively competitive, Apple introduced a suite of its own online services. Initially, the company launched Mobile Me, which turned out to be a disaster. Later, the company rebranded it under iCloud. Since then, iCloud has been the iPhone’s flagship service platform; offering webmail, file syncing and storage of content such as your files, images, and videos. 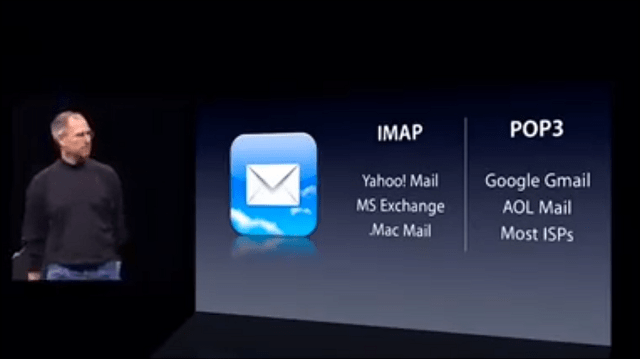 Back in 2007, Apple chose Yahoo! Mail as its preferred provider of push email. Yahoo! was able to provide an exclusive offer to iPhone users with IMAP support. This allowed users keep their messages stored on Yahoo! while new messages were pushed to their devices. Gmail was also another webmail service mentioned, but iPhone had support for the Exchange Active Sync service, too, which let business users access work email accounts on the device. 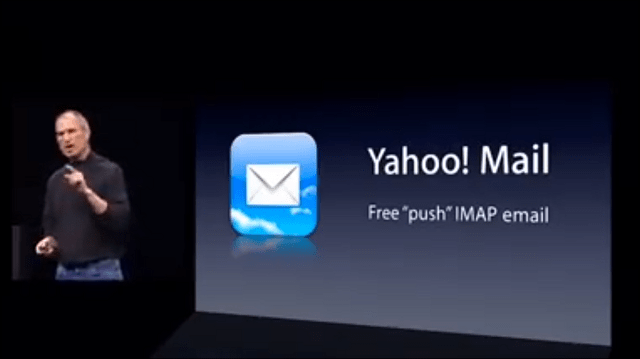 8. Wallpapers were Limited to the Lock Screen 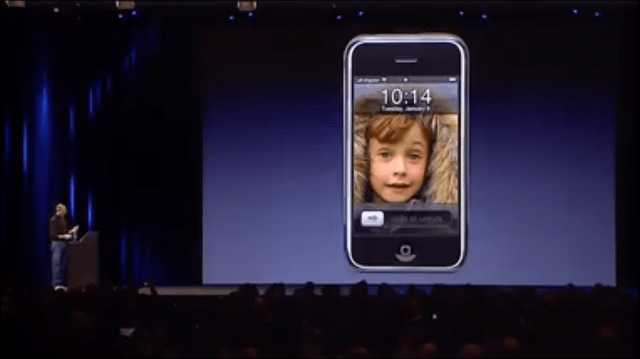 Last year’s iPhone 7 launch saw the introduction of the wireless ear pods, but 10 years ago, Apple had a similar accessory. A slightly bigger Bluetooth wireless headset that looked similar to today’s modern wireless AirPods. That device was limited to calls but it certainly shows that Apple is not afraid to reference some of its design schematics from the past. 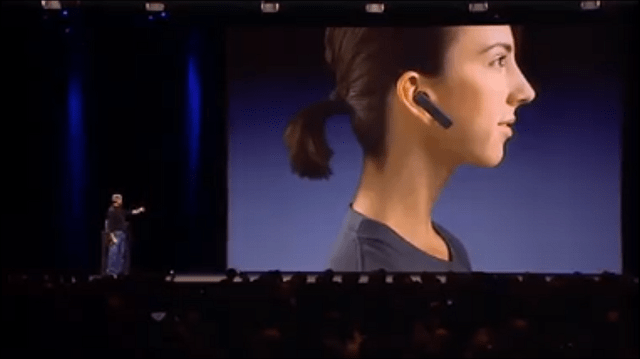 The iPhone came in two storage capacities: 4 and 8 GBs, each costing $499 and $599 respectively. By fall of 2007, Apple would later drop the price of the 8 GB model to $399 to much outrage. The product matrix has become surprisingly complex since then; in addition to the cost of the iPhone increasing since 2007. Today’s flagship models now start at $650 and $750. A maxed out iPhone can go for more than $1,000. Today, an iPhone comes with 32 GBs of internal storage and still does not support SD cards.

Four gigabytes of storage was barely enough to store a few playlists. It might be the case today too, but thanks to streaming services like Spotify and Apple Music, you don’t even need to store your music library on the device – well, for some users. Today, you can get an iPhone with up 256 GB of storage, the latest iPads now support up to 512 GBs, so it’s not impossible to see this year 10 major revision including the same. 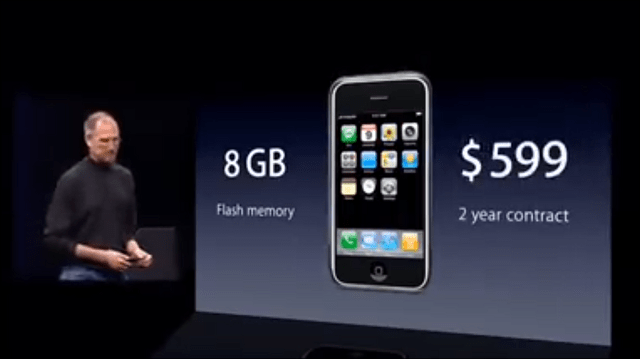 So, that’s 10 interesting observations from 10 years ago. iOS and Apple devices have certainly matured beyond imagination, coming in larger sizes, desktop class performance, a rich collection of services, powerful data networks, and new methods of input that enable the mobility and connectedness we now take for granted. The next 10 years will be interesting to watch; some say, the iPhone is the last of its kind, as a new generation of transparent technologies begins to take its place in the form of voice (artificial intelligence) and augmented reality.

It’s a long way off and there haven’t really been any killer products either from Apple or the industry since Steve Jobs’ passing. It would have been interesting to see where the next possible vision of computing and consumerism would go under his leadership. After 1 billion devices sold and more than a trillion in revenue, the iPhone certainly leads the pack in terms of living up to the hype 10 years later.