Let’s admit it. A person’s favorite browser is the one that he’s been using all along. If all you eat is vanilla ice cream, the “best” ice cream is vanilla. It looks like most of the readers responding to the poll–and our own staffers–have never experienced the thrill of Rum Baba Rum & Raisin, the decadence of dulce de leche, or the over-the-top crunchiness of Wavy Gravy.

I have been a professional taster of browsers for a job I use to have, and I’ve swallowed just about every one of them. That’s why I was really disappointed to see that groovyPost’s poll doesn’t even consider the double-dog best of any browser out there: Maxthon 3.

Never heard of it? You’re not alone. Even though for two years running in Cnet’s Webware competition, Maxthon received more votes for best browser that all the other browsers combined… even thought PCMag picked Maxthon as one of the best browsers of 2011…. even though PCWorld called Maxthon “the best browser you’ve never tried” and named it one of the best 100 products of 2011…. even though more Windows users rely on Maxthon than they do the better known Safari…. Despite all this, mention “Maxthon” to most people, and you just get back a blank stare. 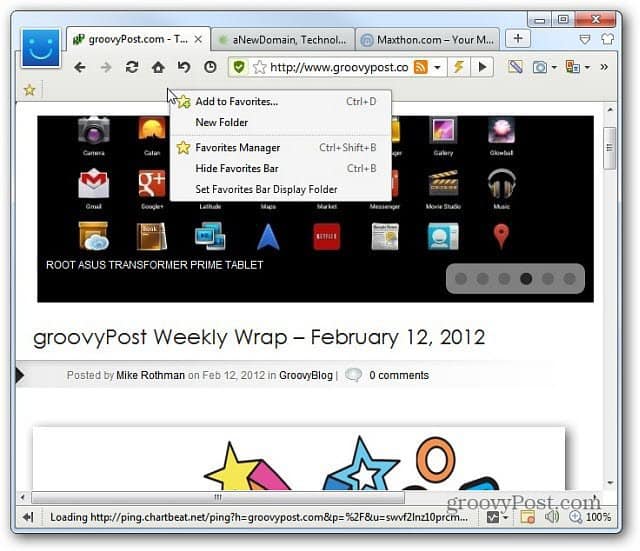 Folks, stop staring. Give Maxthon a test drive. Make that several test drives. That’s what it’ll take to experience all the features built into Maxthon. Such as:

There’s a lot more. I hope this will just get you over the it’s-not-vanilla hump so you download Maxthon and explore its many rich flavors.
Then come back and cast your vote.

And to be fair about it, after trying Maxthon, if you still think another browser is tops, leave a reply telling us about it. I’ll use it for a week and tell you why or why not it replaces Maxthon in the deep freeze of my heart.