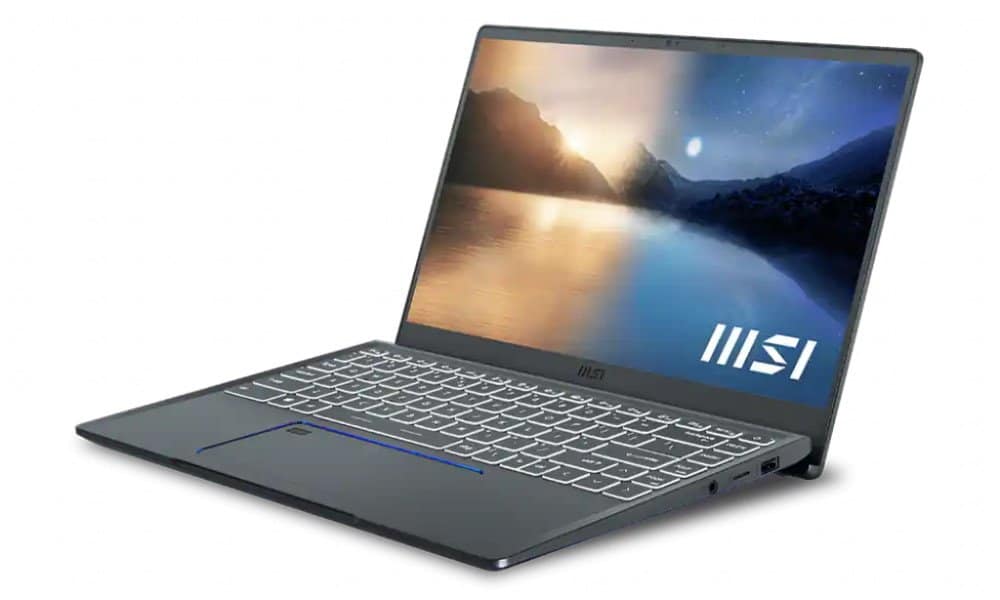 If you’re buying a new Ultrabook, the MSI Prestige 14 Evo is a solid, low-priced choice for both Business, Consumer, and even light gaming.

For years at my Corporate gig, I’ve used countless Dell and Lenovo Ultrabooks, including several Latitudes, XPS, and X1 Carbon models. My favorite Windows Ultrabook, hands down, has always been the original Lenovo X1 Carbon. Although underpowered vs. modern machines, it had that perfect “feel” and function and was first in the Corporate Windows Ultrabook market. That is, it was my favorite until MSI sent me a new MSI Prestige 14 EVO to review.

Powered by the new Intel 11th Gen Intel Core I7 processor (Tiger Lake) and its embedded Intel Iris XE GPU, the MSI Prestige 14 EVO (A11M-220US) is, hands down, the best business Ultrabook I’ve ever used. It’s fast, ultra-light, has a solid build design, and has plenty of battery life. Now, is it perfect? Of course not. Read on for all the details of what I both liked and disliked about the MSI Prestige 14 Evo during the past month of using it. 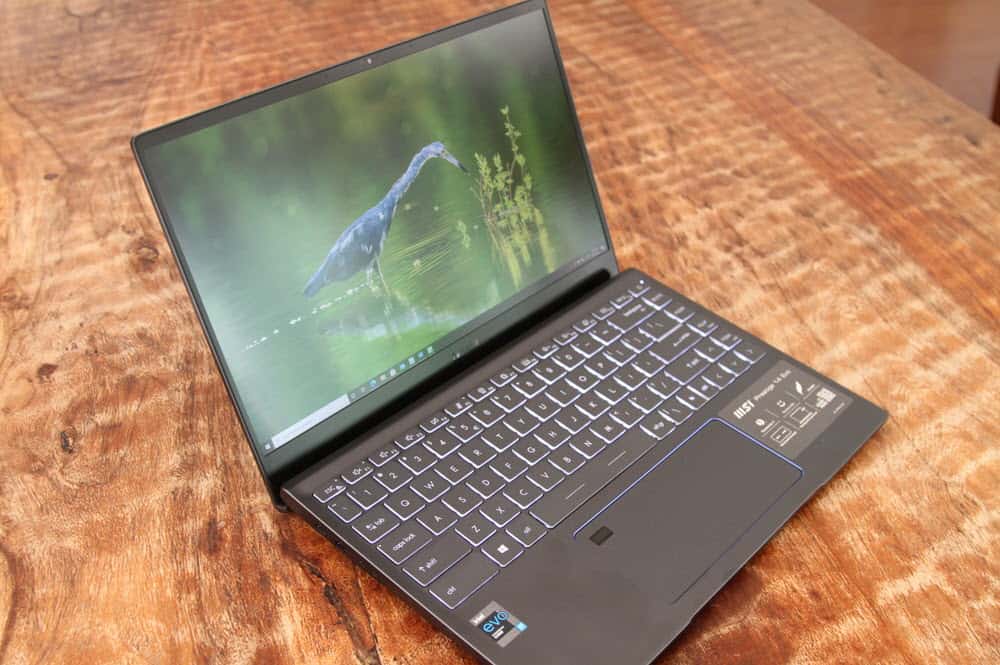 The Prestige 14 Evo is built with an all-aluminum body. The Carbon Grey model with blue accent edging cut into the body and Touchpad gives it a premium look and feel. Weighing just 2.8 pounds, I was shocked that it felt lighter than my Macbook Air and just as sturdy (if not more so). When opening the laptop, the display hinge lifts the keyboard to a five-degree angle. The added angle makes typing easier while at the same time providing more airflow for cooling under the laptop—a very nice design in that regard. 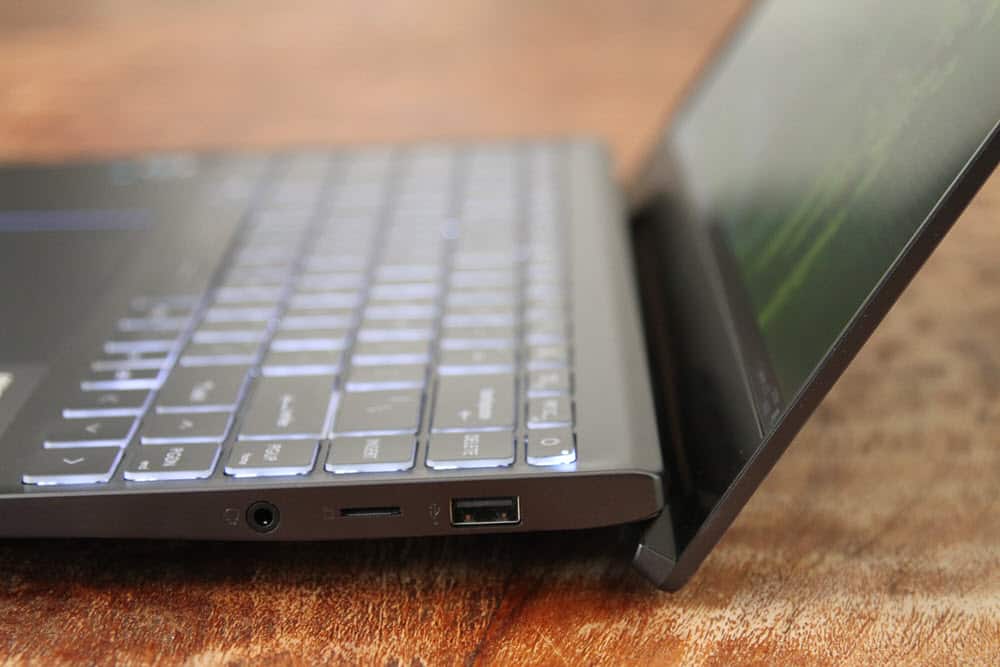 The only issue I have with the design is the location and size of the Touchpad. While resting my two palms on the keyboard while typing, I accidentally clicked the Touchpad when reaching for certain keys with my right hand/fingers. Granted, with a little time on the keyboard, it became a non-issue but, even after a month of using the system, it still happened a few times until I found the Touchpad disable function above the #4 key.

Speaking of the keyboard, the backlit keyboard is nice and bright, and the keys have just the right amount of resistance while tying. I’m picky when it comes to keyboards, but these keys felt just right. The keyboard also allows you to easily control all the various functions of the laptop, including adjusting: 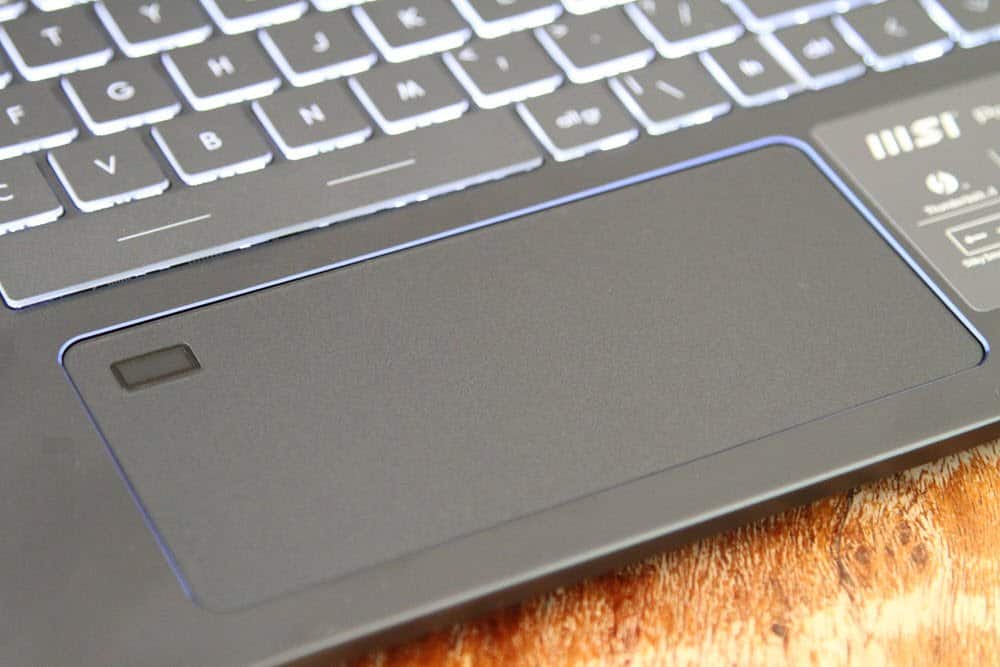 The Touchpad a big and wide and very smooth. Windows laptops frustrated me for years due to their mediocre Touchpad compared to my Apple Macbook Air and MB Pro. I’m happy to say, MSI is almost there with its Touchpad on the Prestige, supporting multi-touch features and gestures like two-finger scrolling, pinch to zoom, three and four-finger gestures — all fully configurable in the Windows Toughpad settings.

The Touchpad also has a biometric fingerprint reader to make logging in easier. It works most… of the time. It normally took a few times to place my finger on it to log in. Not a big deal, honestly, as the laptop also supports Windows Hello via its embedded webcam. 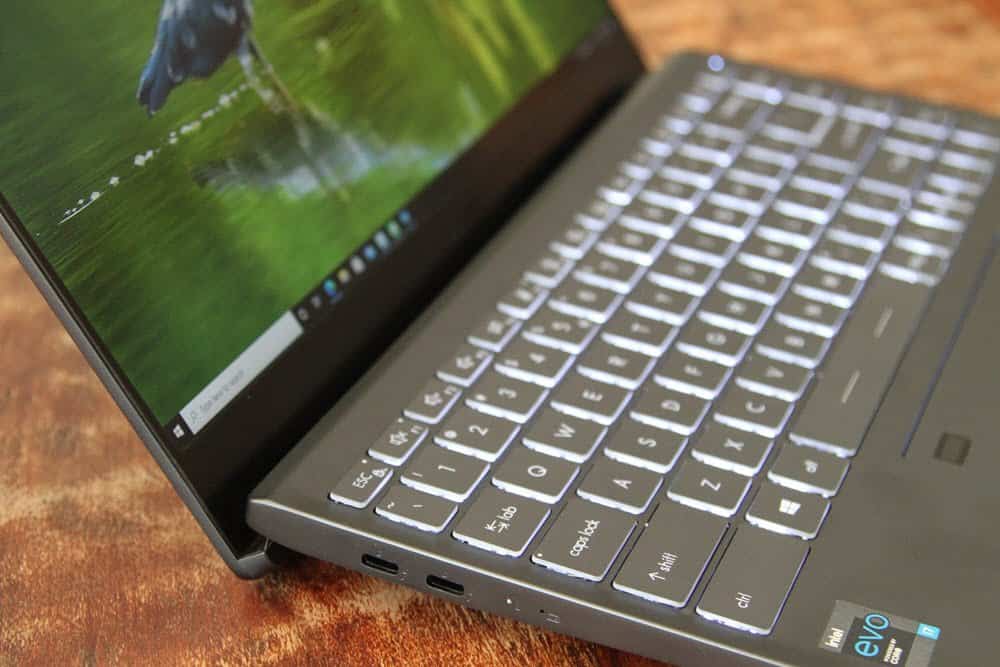 Although the laptop is equipped with a pair of USB-C Thunderbolt 4 ports, I was happy to see they bucked the trend and added a USB-A port as well. 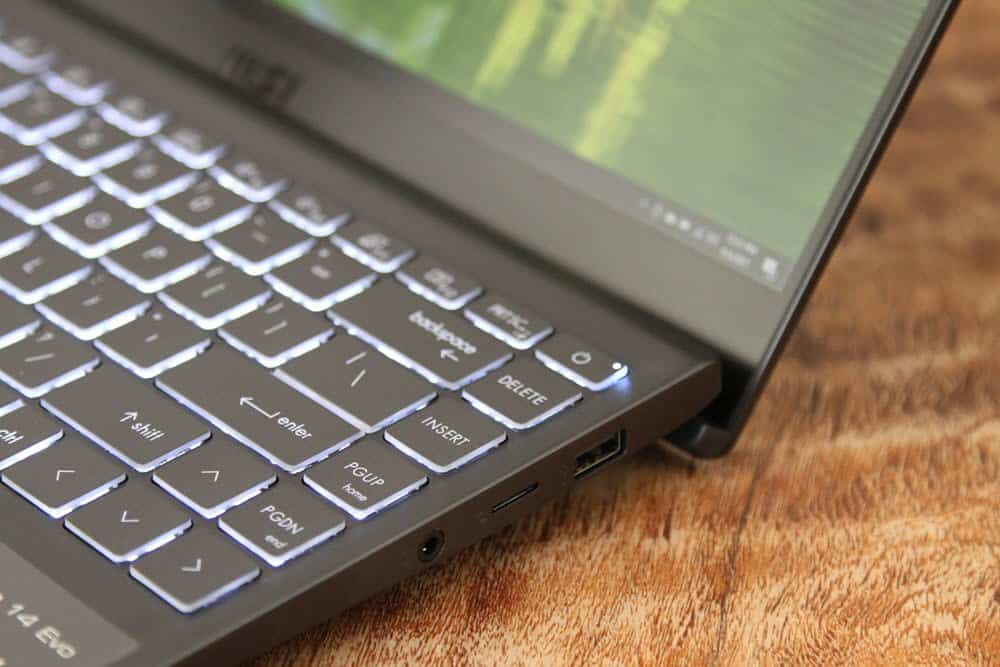 I have an Apple MacBook Pro 13-inch from 2020, and it only has USB-C Thunderbolt ports which has been incredibly annoying as I can’t use any of my old USB devices or hubs.

System Performance on the Prestige 14 Evo

Since the start of computing, the “Business” laptop, including Ultrabooks, has been a one-trick pony.  They were good enough for productivity apps like Microsoft Office and surfing the internet, but worthless for any other purpose like Video Editing or even light Gaming. The problem has been the cost of including a critical hardware component called a GPU or Graphics Processing Unit. This all changes with the chip at the heart of the MSI Prestige 14 Evo. 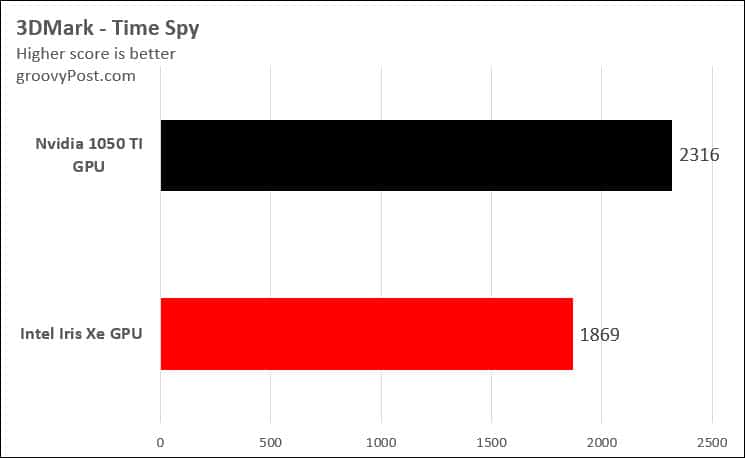 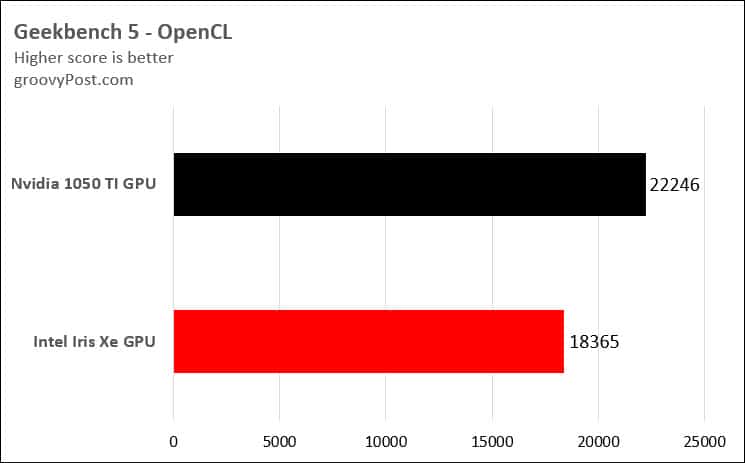 Overall, the performance of the Intel 11th Gen CPU & GPU is impressive and, in many ways, very much needed considering how more and more software makers are offloading workloads to the GPU. That’s right, GPUs aren’t just for games and compiling complex AI algorithms. Just take a look at Task Manager, and you will see some of the heaviest users of your GPU is Microsoft Office and the Google Chrome Browser. With the Intel Iris Xe, everything on your Windows PC will run better. Just don’t get any ideas about mining Bitcoin with the Iris Xe… Probably not the greatest idea at this point…

Gaming on the MSI Prestige 14 Evo

Although not marketed as a “Gaming” laptop, the Intel Iris Xe GPU performed well with the two GPU intensive games I threw at it — Ark: Survival Evolved and Deep Rock Galactic. Out of the box, both games ran below average. Still, after updating the Laptop’s BIOS and Video driver to the latest versions (Bios – E14C4IMS.315 dated 6/24/2021 and Video Driver – 30.0.100.9805 dated 7/23/2021), performance improved significantly. 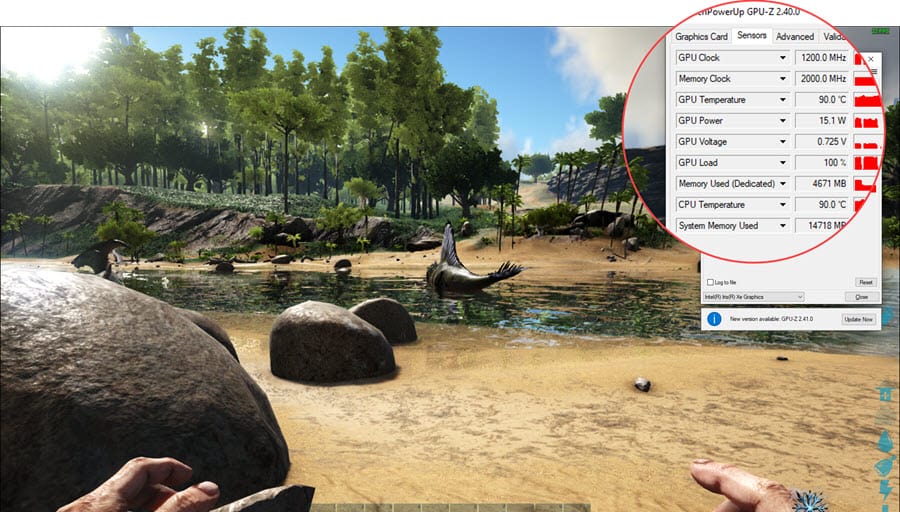 I turned down the graphics settings to “High” for both games and played for a few hours. Both were VERY playable with no issues other than I’m used to playing on a 32 inch 4K display… Anyway, my average FPS on Ark was 22 with an average GPU / CPU Temperature of  84°C (183.2°F), pulling 15.1 W. Now, if that sounds hot, it was. My fan was blowing at 50 dBA, and the keyboard’s surface above the Volume keys was scorching hot to the touch, as was the laptop’s underside.

Deep Rock Galactic performed even better at 43 FPS. The GPU / CPU Temperature and fan noise came in about the same as other games. 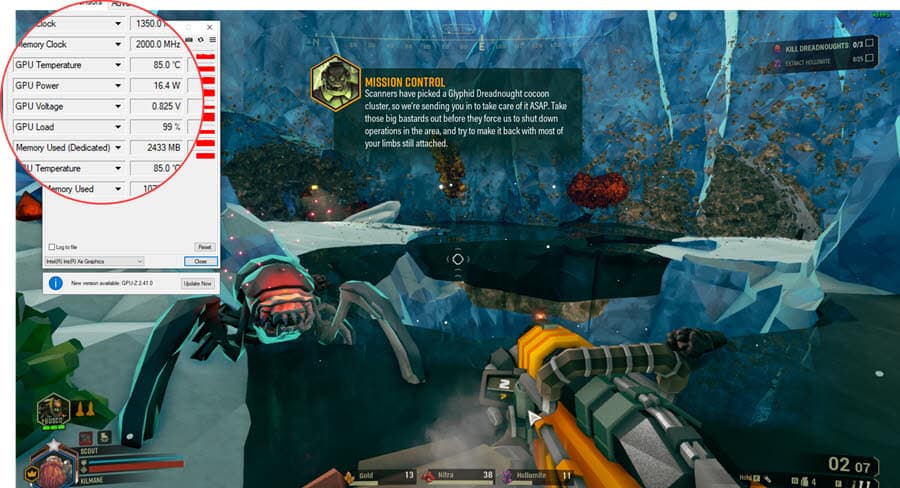 Overall, considering that this is an embedded GPU on the CPU, extremely impressive! Not only could the laptop handle what I threw at it, but the games were also fun and 100% playable. Perfect for those business trips where I might have some downtime in a hotel room and don’t feel like lugging around my gaming rig with me on a flight.

If you’re a regular reader at groovyPost, you know we talk a lot about the importance of a fast hard drive. The MSI Prestige 14 Evo continues to impress me with its PCIe Gen 4 NVMe SSD support. My unit came with a Phison 512GB SM280512GKBB4S-E162 PCIe Gen 4 NVMe SSD. Unlike the Memory, which is soldered to the motherboard, the SSD uses a standard M.2 slot, making for an easy upgrade if the OEM 512GB SSD isn’t large enough for you.

When testing the performance of the NVMe SSD, you can really see the benefits of the PCIe Gen 4 NVMe SSD. Using CrystalDiskMark, I hit 5K MB/s on sequential reads and 2.5K MB/s on writes. Exactly what I would expect from a PCIe Gen4 drive. 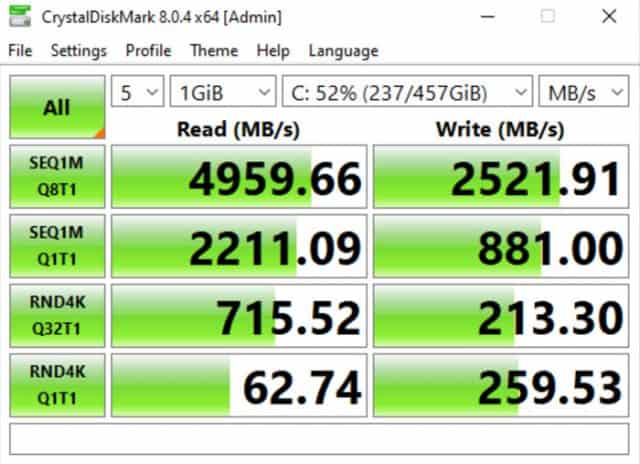 Display on the MSI Prestige 14 Evo 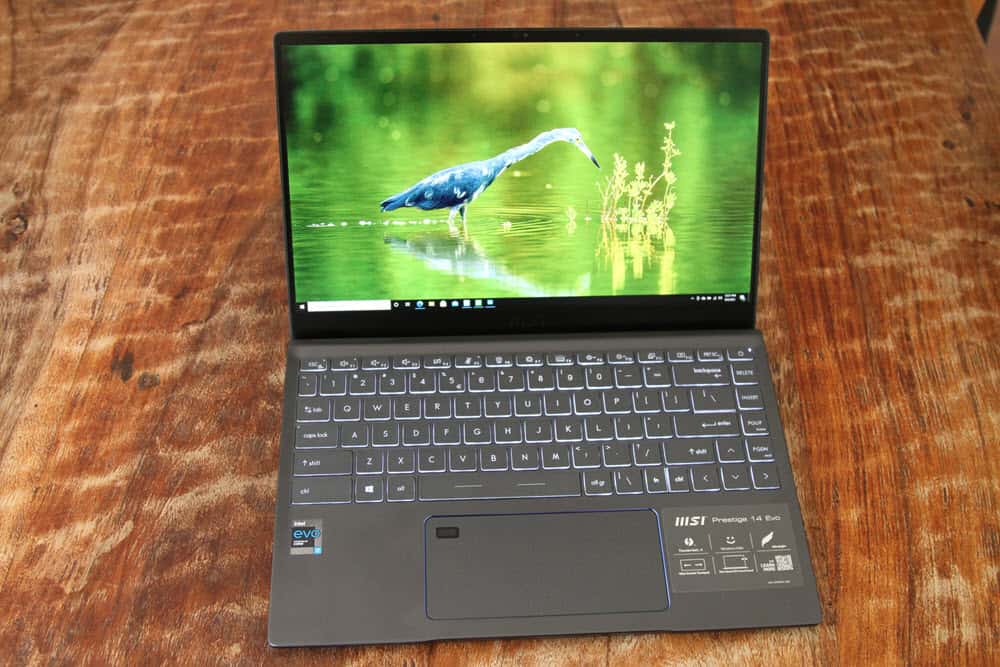 The Prestige 14 comes with a 14 inch 1920 x 1080 (16:9) IPS screen. IPS or in-plane switching displays are at the top of the list in terms of color and viewing angle quality vs. lower quality TN (twisted nematic) or VA (vertical alignment) LCDs. I personally won’t buy a Laptop or Monitor unless it’s an IPS display, so it’s nice to see MSI put a premium display into this little Ultrabook. Granted, it would have been even better if it was rocking a 4K screen but, that would no doubt have jacked up the price out of the sweet spot MSI is targeting. The display also has a nice thin bezel on it which is nice. I wish they would have gone with a 16:10 display vs. a 16:9. It’s not that things feel cramped but, having a little more room would have been nice. While testing the display for almost a month, I never had an issue with its brightness or black levels.

Audio on the MSI Prestige 14 Evo

The laptop features a bottom-fitted speaker on both the left and right sides. Throughout the month I spent testing the MSI Prestige 14 Evo, I played countless YouTube videos and movies streamed from Disney+. Early on, I found the speakers and overall audio quality below average. Not only are the speakers not very loud, but the audio quality is terrible — very tinny with no bass. Granted, I solved the problem by using my JBL headphones but, hopefully, this is something MSI will correct in future versions.

Using the Laptop for over a month, I enjoyed the extended Intel Evo advanced battery life. Just sitting on the couch doing casual business/personal tasks, I routinely got over 7 hours of battery out of it. In addition to my standard testing, I also performed a PCMark 10 Modern Office Battery Life benchmark test which measures the battery life from 100% to 0% while performing a realistic balance of writing, web browsing, and video conferencing tasks. Running this test on full performance mode with the screen brightness set to 100%, the system managed to run for 312 minutes before powering off.

MSI’s website states the MSI Prestive 14 Evo provides 12 hours of productivity and 15 minutes of charge for up to 1.5 hrs of use. Although I didn’t see that in my testing, if you reduce the screen brightness, disable the backlit keyboard, and set the system to a balanced performance mode, I have no doubt you could add another 20-30% battery life to the test I ran. Regarding charging, the USB-C charger fully charged my Laptop from 0% to 100% in 90 minutes.

As I gave away in the first paragraph, I really liked the MSI Prestige 14 Evo. That said, here’s how I broke down my final thoughts from my testing.

Although it’s not perfect, I have no issues recommending it to my readers if they are looking for an inexpensive Ultrabook for home or business. With the embedded GPU and high-speed NVMe SSD, the system will have no issues giving you at least 3-5 years of quality productivity and gaming use.

At the time of this writing, you can grab an MSI Prestige 14 EVO for under $1000.00 from Amazon, Bestbuy, and other retailers.