The datAshur Pro USB 3.0 flash drive is a unique way to keep your company secrets secure with military-grade hardware encryption. 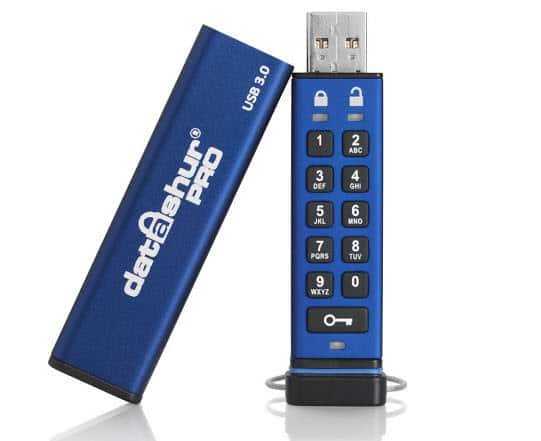 The datAshur Pro from iStorage is much more than a simple flash drive for transferring around random files. It’s a powerful data storage tool that allows you to keep your most sensitive data locked down with military-grade hardware encryption. Here is a look at what you can expect from a flash drive that takes security very seriously.

I don’t know how many flash drives I have laying around or lost over the years. For the ones I haven’t lost, I don’t have a clue what’s on them. But I never put important files on a flash drive without encrypting it first. I would typically use Windows BitLocker or a third-party software solution. But the datAshur Pro flash drive from iStorage makes the drive encryption process much easier. This is a well-built quality drive that you wouldn’t think of using in a nonchalant manner, but if it were lost or stolen, your data is protected.

The datAshur Pro features XTS-AES 256-bit hardware encryption. All data transferred to the USB 3.0 flash drive is encrypted in real-time with the built-in hardware encryption engine. It automatically locks when unplugged and protects your data even if it is lost or stolen. Because you need to enter your PIN through its keypad, it’s not susceptible to keylogger attacks. The flash drive is also water and dust resistant inside its included aluminum case. 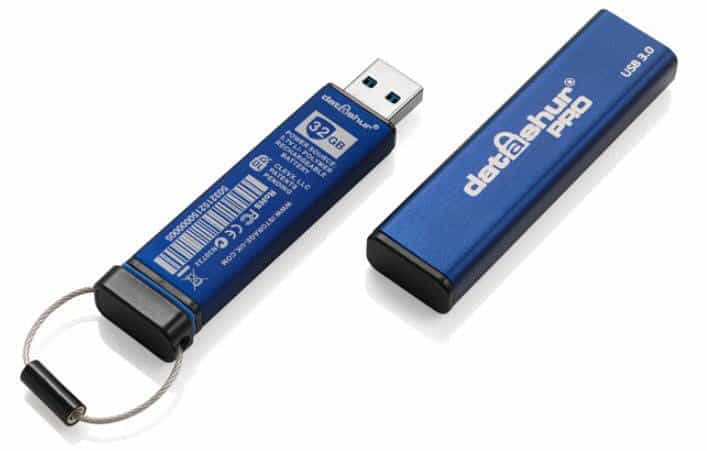 The flash drive is easy to use. Simply enter your PIN on the keypad and then plug it into an open USB port on your computer. Since it utilizes hardware-based encryption, no additional software is required. If you enter the code incorrectly 10 times the user code will be deleted which protects against brute force attacks. 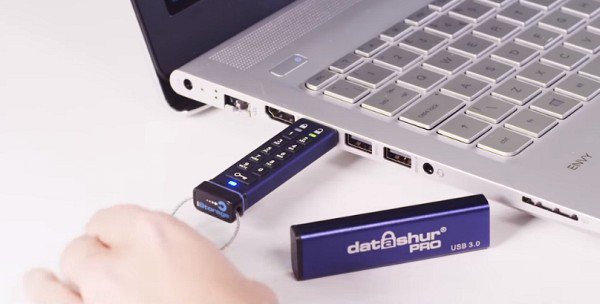 Since it’s a USB 3.0 device you can expect quick transfers of files when using a compatible 3.0 port. I was able to transfer large video files and folders containing hundreds of Microsoft Office documents in a flash. Once you enter your PIN, it’s as simple to use as an unencrypted drive. While the drive is rugged and well built, the buttons are small. This can make it hard to enter your PIN in accurately – especially if you’re in a hurry. However, since it is a flash drive and a small form factor, it’s hard to complain too much about the key size. If you want to keep your world domination secrets secure while on-the-go, encryption is necessary, and the datAshur Pro flash drive is a solid investment.

The drive comes with a quick start booklet, and a complete user guide in PDF format is included on the drive. You can also download it from the iStorage website. The datAshur Pro works with Windows, macOS, Chrome OS, and Linux. You can buy one direct from the site with the 8 GB model starting at £69 or about $95 U.S. Of course, you can also get the drive from retail outlets like Amazon or Newegg.

iStorage provides other drives that have the same type of hardware encryption, too. We’re currently testing out the 1 TB diskAshur2 portable hard drive and will have a review of it in the coming weeks. For more, head to the iStorage website and be sure to watch the following video that shows the datAshur Pro flash drive in action.