On Thursday released version 4.0 of its app for iPhone and Android, which has abandoned all remnants of the original Tweetie UI. Twitter is also rolling out the new version of Twitter.com, which Twitter’s Jack Dorsey and Dick Costolo says is aiming to make the social networking site “simpler”. 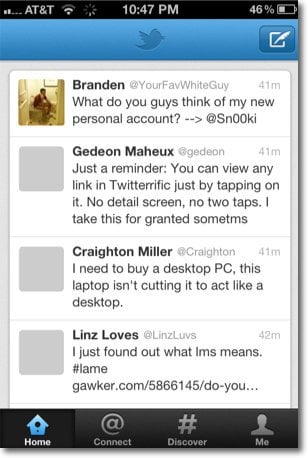 The update to the native app on iOS and Android is a complete redesign of the Twitter app. It now shows just four options in the navigation bar — Home, Connect, Discover, and Me.

Home is just another word for your timeline. Connect is where you’ll find your @ Mentions along with something new called Interactions. Tapping Interactions shows not only your mentions, but also informs you of new followers and retweets. Discover is a new way of displaying trending topics, and takes more of a newsy approach. Each topic has a blurb about the story, and tapping a trend shows links to the full story and user’s tweets. The last option is Me, which shows your profile information. Direct Messages has been moved into this area, along with lists, the ability to switch accounts, and access to settings.

Along with the new layout, there are a few features from the previous version that have been removed. For instance, the ability to swipe across a tweet to reveal options is gone. This was the trait that distinguished it from all of the other Twitter apps years ago when Tweetie first integrated it. Mashable.com also pointed out that it is no longer possible to copy text from a tweet and paste it somewhere else, perhaps to prevent people from retweeting something from a private account. They also discovered translating tweets from a different language was removed, (@Die_Monkey on Twitter mentioned that the Instapaper support is actually there after you tap on a link and then tap the arrow in the lower righthand corner). Another downfall of the new app is noticed right away – it takes longer to load when launching it. 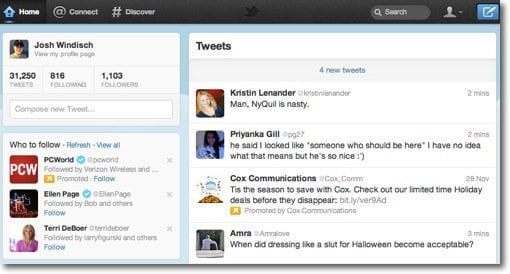 Twitter’s new web interface has a lot of promise, though. The web version is similar to the iOS and Android app in a lot of ways, except the new layout seems to translate much better to the traditional desktop browser. Photos appear in line when clicked upon, and conversations appear within the timeline too. At the top of the page, the same options are available as are on iPhone – Home, Connect and Discover. The profile page is much improved, making your bio information, tweets, stats, interactions and recent photos much more attractive. A groovy new aspect of this new Twitter is embeddable tweets. You can embed specific tweets in a web page and it includes all the options you’d typically find in your timeline.

Another new aspect of Twitter’s redesign is brand pages. It’s taking the same approach as Facebook and Google Plus in that the whole page can be catered to certain brands. In addition, the brands will continue to promote tweets in user timelines. The pages are free and can be utilized by any small or large business.

So far the new version of Twitter looks great on the web, but isn’t an improvement on the iPhone app. Twitter has said on their official blog that this is only the beginning, and they plan to update other apps such as Twitter for iPad.