There are plenty of security apps available on Android. Last week we showed you reviews for three of the most popular ones, and now I’ll round them up in a feature comparison to see which one is the best.

You’ve probably heard about some of the viruses that have recently infected Android users. But more importantly, I think, everyone knows how valuable some of these phones are and how easy it is for them to get lost or stolen. As it stands the most popular free Antivirus apps currently on the Google Play Android Market have both anti-theft and anti-malware features. Here’s a look at how they stack against each other. 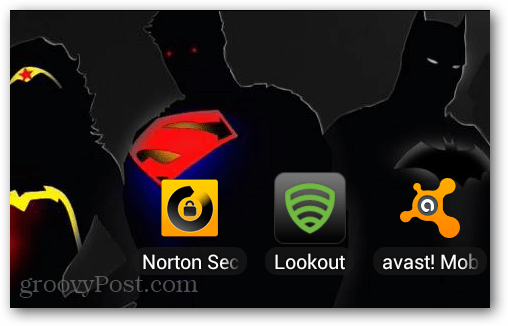 Over the last week I went through and reviewed each of the Android security suites using just their free features:

Currently, Norton and Lookout offer an optional premium subscription inside of their respective apps. The subscription cost is around ~$30 per year, and Norton’s is limited to one device. On the other hand, Avast! is completely free and doesn’t offer a paid account or advertisements. 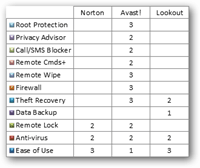 In order to compare the three different apps, I took all of the free features available in each app and cumulated them into 10 different categories worth up to three points each. If an app performed excellently in that category I gave it three points. If it performed poorly it received one point. If the app couldn’t perform the feature for free, it didn’t receive any points in that category.  I also added a bonus category called “Ease of Use” that gave each app up to three bonus points for being easy to set up and use. The scores came out as follows: 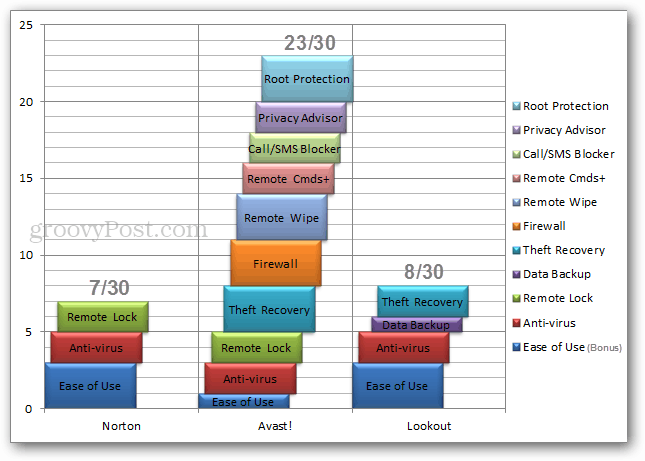 When put up against each other, it’s no contest for Avast! to outrank either of the two Android security apps. It bolsters more than three times the features, and it doesn’t try to lure you into a paid subscription. Avast! is a little more complicated to set up and use, but it left me feeling more confident in the ability to recover my smartphone and protect sensitive data if it was ever stolen or missing. Avast! provided root-level protection that the other two competing apps did not – which for me is a big deal.

Of course, when compared to the two runner-ups Norton wasn’t that far behind Lookout. This is only because Norton supplies a way to remotely lock your device. Lookout provides a handy web interface for finding your phone via GPS, however, if the GPS is turned off in the phone settings this won’t work here. Avast! can do all of these things, and if your phone is rooted, it can remotely activate the GPS.

Overall, Avast! is the best free Android security suite that I’ve seen so far. It’s a bit more complicated to use and setup, but I think that’s because of how many features it has. And surprisingly enough, even the premium subscriptions with Norton and Lookout don’t have enough features to go toe-to-toe with Avast!. So why would anyone want to use Norton or Lookout when there is a free app that provides more features than costly competitors? I have no idea, it would be silly to do so.