Yahoo has announced it will be closing down some of its Yahoo Messenger services, including one of the most popular features — Windows Live Messenger interoperability. 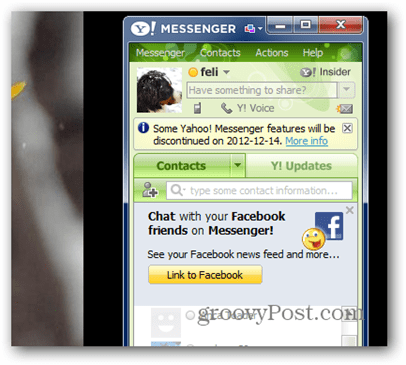 The good news is that Skype now offers Windows Live Messenger interoperability and Facebook chat too.

That same post mentions two other services that are being closed down on December 14, 2012. Public Chat Rooms and Pingbox will also cease their functioning. I won’t miss these two too much, but giving a two-week closing notice seems a bit harsh.

And that’s not all. The Yahoo Voice Phone In and Out feature is also getting closed down. Starting November 30, you can no longer transfer funds to your account. The feature stop working completely on January 30, 2013.

With so many changes coming to Yahoo!, I’m not shocked CEO Melisa Mayer is closing down those which are either not brining in revenue or not the leaders in their silo. We will be keeping an eye on the other cuts and new services Melisa will be announcing so keep an eye on groovyPost for the latest Yahoo! news!