Don’t worry, your Windows 10 Pro license has not expired. There is a known issue with Microsoft Activation servers and the company is working on a fix.

Microsoft activation servers suffered from a bug today that caused many users to see a message that their Windows 10 Pro license is no longer good, and they need to downgrade to Windows 10 Home. But don’t panic, your license is still good. Microsoft is aware of the issue and is currently working on a fix.

Update 11/9/2018: This issue has been resolved. Near the end of the day yesterday, users were reporting the activation issue had been resolved. The user shouldn’t need to do anything other than going to Settings > Update & Security > Activation and you will see your version of Windows 10 Pro is genuine.

In an article from Mary Jo Foley she notes an official statement from Microsoft exec Jeff Jones:

A limited number of customers experienced an activation issue that our engineers have now addressed. Affected customers will see resolution over the next 24 hours as the solution is applied automatically. In the meantime, they can continue to use Windows 10 Pro as usual.

We still don’t have an explanation on why the problem occurred in the first place.

Here is the message from Microsoft Support:

There is an ongoing issue about Windows 10 suddenly shown as deactivated. The affected users need not to do anything as it is a known issue. Here is what was told by Microsoft Chat support:

Microsoft has just released an Emerging issue announcement about current activation issue related to Pro edition recently. This happens in Japan, Korea, American and many other countries. I am very sorry to inform you that there is a temporary issue with Microsoft’s activation server at the moment and some customers might experience this issue where Windows is displayed as not activated.

If you go to Settings > Update & Security > Activation you may see the following message about your license not being valid. 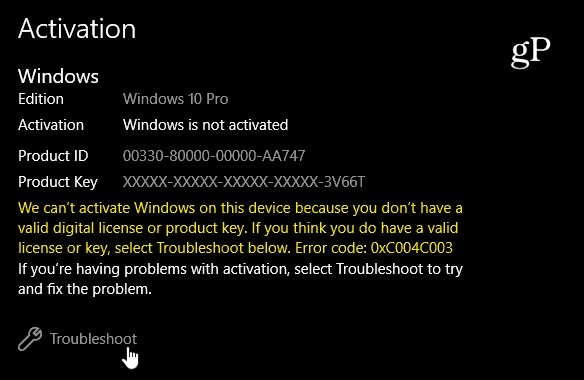 You can try to click on “Troubleshoot” link and Windows will try to detect any problems. And for some users, that’s all it takes to get the license squared away.

Unfortunately, after the troubleshooting completes, a majority of users are getting the message below which says you’re running Windows 10 Home and need to downgrade. 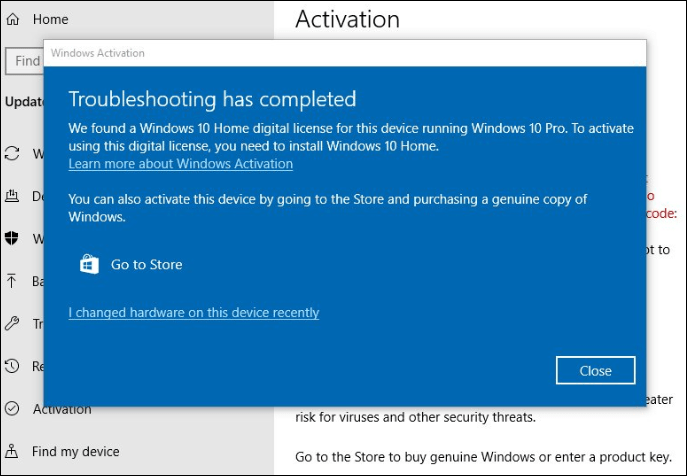 It looks like users affected the most with this issue are those who upgraded to Windows 10 Pro using an older Windows 7 or Windows 8.1 product key.

And you’re not alone in this annoyance.

There are thousands of posts from upset users on Reddit today regarding the issue. It’s not yet known what is causing the problem but rest assured that Microsoft is well aware of the problem and is working to get everything running smoothly again. We will update this article once we get an official word form Microsoft about the “server issue” that is causing this problem.

Until Microsoft does announce the issue is fixed, as a workaround, you might want to contact Microsoft Support via chat to reactivate your license. Or, try some of the tips in our article on fixing your Windows 10 product key activation.

Also, make sure to keep a backup of your product key. If you’re not sure what it is, read: How to Find Your Windows 10 Product Key.