Netflix has rolled out a helpful new feature for users who love to binge shows on their Android phone or tablet called Smart Downloads.

For a couple years now, we have had the ability to download Netflix movies and TV shows on Windows 10, Amazon Fire tablets, and iOS and Android devices. It’s a valuable option to download content to your device via Wi-Fi before going somewhere you won’t have internet or if you’re on a limited data connection. But now, Netflix is bringing an extra helpful feature to its app on Android.

Netflix announced the rollout of a new feature called “Smart Downloads” for Android phones and tablets. The new feature will automatically delete downloaded episodes you’ve watched and then replace them with the next new episode in the series. It will only download episodes while you’re connected to Wi-Fi which will save on data use and help maximize storage space.

The new feature was announced this week. “Today, we are excited to introduce Smart Downloads. Now, when you finish watching a downloaded episode, Smart Downloads will delete it, and then automatically download the next episode. You watch, we do the work,” writes Netflix exec Cameron Johnson. So, if you download episodes 1 through 4 of the Netflix Original series Luke Cage, for example, when you finish watching episode 1, Netflix will delete it and automatically download episode 5.

The feature should be on by default, but if you want to keep old episodes on your device so you can watch them again, you can toggle the Smart Downloads feature off. On your phone or tablet, launch Netflix and tap the Downloads button. At the top of the screen, you should see a message that Smart Downloads in on – tap it. On the next page, you will get a message telling you what Smart Downloads is and how it works, and you can simply just toggle it off. 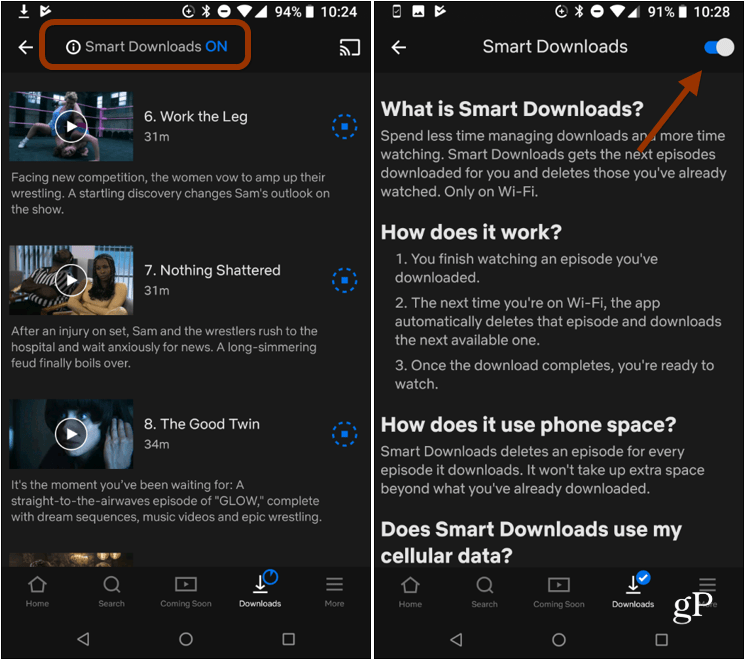 Previously, if you were to download too many episodes, Netflix would display an error and not let you download any more until you deleted some shows first. So, if you like to binge shows on Netflix, you ought to find this a helpful new feature. However, it’s nice to know that you can turn it off if you want. Netflix didn’t say when the feature will come to iOS or any other platforms yet.