Microsoft this week has released Windows 10 preview build 19559 to Insiders in the Fast ring.

Microsoft this week released Windows 10 preview build 19559 to Insiders in the Fast ring. This build follows up last week’s build 19555 which contained mostly bug fixes. Similar to preview builds of late, this one also has no front-facing features. Here’s a look at what you can expect. 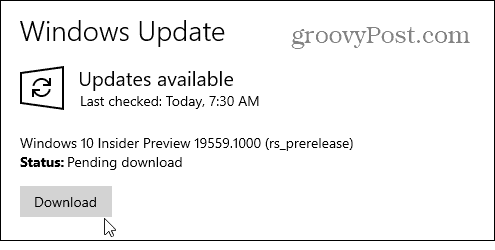 Here is the list of general changes, fixes and system improvements contained in this recent Insider build:

Important: Windows 10 Insider builds are meant for IT admins, coders, and Windows power user enthusiasts who want to test out new features. If you’re not an experienced user don’t install these builds on your primary production PC. Preview builds contain many bugs and stability issues.

For more on this build’s known issues and workarounds make sure to read Microsoft’s full blog post.

If you are an Insider, keep in mind the Fast ring works differently since the testing of 20H1. The next version is in active development branched called RS_PreRelease. Features that show up in Insider builds moving forward may or may not show up in future stable releases.