Microsoft today announced it’s rolling out a new revamped version of Outlook.com that contains a new look and features. Here’s a look at what to expect.

Microsoft today announced it’s starting to roll out a revamped version of Outlook.com that contains a new look and features. The company says it is rolling it out as fast as possible to users worldwide, with millions of accounts being updated each week.

The new built-in features are powered by Office 365, so you’ll see many of the same benefits from the Office subscription service. One of the neat things about this is that you can edit documents side-by-side in your email.

Some of the new improvements include support for cloud storage services like OneDrive and Dropbox and third-party add-in support for partners such as Yelp, Wunderlist, and Giphy.

Since Gifs have resurfaced as a popular new Internet thing these days, Giphy lets you add Gifs from what Microsoft describes as “the world’s largest and most powerful GIF library—without leaving your Outlook inbox. You can use GIFs to celebrate birthdays and anniversaries, congratulate people on achievements, give thanks to friends and family, and more!” 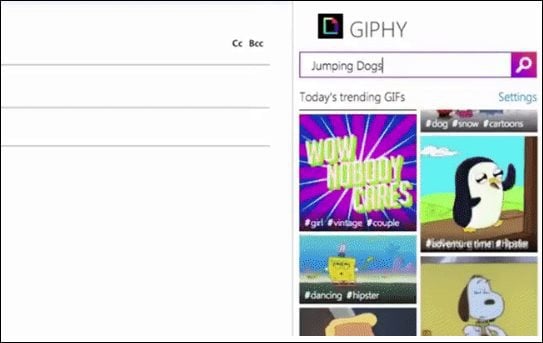 According to the Outlook announcement, it also offers better Skype integration for text and video calls while on the site, a smarter address book, and improved app support for Mac and PC.

The experience for users connecting to Outlook.com from the Outlook apps for Windows or Mac is also greatly improved with this move to a new platform. Setting Automatic Replies, toggling flags and syncing categories, inbox rules and drafts are now available, providing a great Outlook experience whether you prefer to work in an app or on the web. Outlook on Windows now supports Outlook.com email aliases, while Outlook for Mac can now sync calendar and contact information.

I haven’t received the update yet, but it’s also worth noting that if you sign up for a new Outlook.com account today, you’ll see the new look and features (if you are in North America).

If you haven’t received the update yet, be patient. Microsoft says it will be available soon, and you don’t need to take any action to trigger the upgrade.

There’s a lot more going on here that I haven’t mentioned. You can read the full story on this Office Blogs announcement. We’ll be covering this development closely in the coming weeks and will have more awesome tricks that will allow you to get the most out of this new version.

Are you using the new revamped Outlook.com? If so, leave us a comment and tell us what you think of it so far.