If you have the cash to splurge on 24 TBs of RAM; Microsoft has an operating system for you called Windows Server 2016.

If you have the cash to splurge on 24 TBs of RAM; Microsoft has an operating system for you called Windows Server 2016. In a previous article, we described the memory limits for Windows 10 client, which now tops out at 2 TBs for 64-bit premium business editions. The interesting thing about this modification was the clients support for more RAM than some server editions of Windows such as Essentials. This made for an awkward situation. Not to worry, Microsoft has upped the threshold, this time, providing enough resources for running a program like iTunes. Just kidding.

Microsoft’s decision to increase the RAM limits for Windows Server 2016; the software firms network operating system, was based on customer demand. The company was inclined to provide more support since customers are running more RAM-heavy apps such as SQL Server databases and new technologies like containers; outstripping the limits of Windows Server 2012, launched in 2012, which topped out at 4 TBs for the Standard and Datacenter editions. While the limits have increased, the minimum requirements remain the same, requiring a minimum 512 MBs, while Windows 10 requires 2 GBs for 32 and 64-bit versions.

Back in Windows Server 2012, we raised the bar for Hyper-V, delivering industry-leading scalability across a number of scenarios. These numbers were so high, that when we delivered Windows Server 2012 R2 a year later, we didn’t even bother to push the scale numbers further because we had no requests!

Not this time. With Windows Server 2016, we had numerous requests to push Hyper-V scalability to new heights to embrace interesting new scenarios around data analytics and machine learning, which means really huge databases.

Now, you have it. With Windows Server 2016, we are delivering new industry-leading scalability to virtualize any and every workload without exception. Source 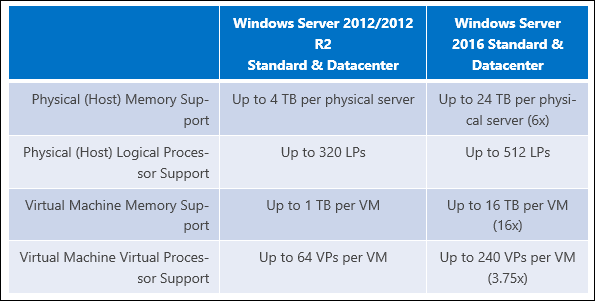 The new version of Windows Server includes features focused on Cloud technology, storage improvements and better protection of virtual machines. Certainly, 24 TB’s is probably not in the cards for many of us mere mortals anytime soon. Besides, you probably would need a specialized server system capable of supporting such a configuration. Such systems are usually high-end data center servers requiring specialized server rooms with intricate cooling technology.

Over 20 years ago, I had a computer with 24 MBs of RAM and at one point, I thought it was incredible seeing a workstation with 1 GB of RAM in 2001. Today, I can barely get by with 8 GBs of RAM on my workstation, which I use for a variety of tasks; whether it’s running multiple virtual machines, memory hungry apps like Photoshop, Microsoft Office and web browsers with multiple tabs. How much RAM do you have in your PC/device?