On Monday, October 24th, Apple released iOS 10.1, a major security and stability patch for iPhone and iPad iOS 10 users. Let’s review what’s included in the update and when you should upgrade your device.

Yesterday Apple released iOS 10.1 for its iPhone, iPad, and iPod Touch customers. Having released iOS 10 just a little over a month ago, iOS 10.1 is considered by many as a significant bugfix and security maintenance release. 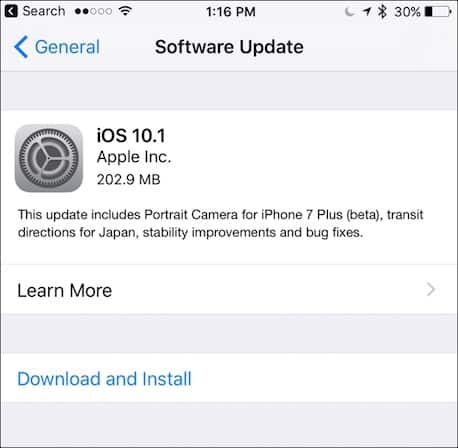 On my iPhone 6 Plus (yes, I’ve not yet upgraded to an iPhone 7 yet…), the download was a little over 200 megabytes. The download and install took exactly 17 minutes. Pretty quick and simple.

The majority of the update includes bug fixes and security updates. That said, 10.1 also includes one or two updates/new features for the Camera, Photos, Maps, and Messages apps. I’ve included the full breakdown from the release notes so you can dig into the details.

Other improvements and fixes

Should you Update Your Device to iOS 10.1?

With the exception perhaps of the Bluetooth fixes and Maps upgrade for specific cities in Japan, the real value of this update is all the security exploits patched. With that in mind, unless you’re having issues with your device, I would suggest waiting a day or two just to let this update bake in the wild a bit. If by Thursday or Friday Apple doesn’t pull the update, move forward and patch your devices.

For me personally, I take security updates serious and like to patch my devices no later than 24 hours after release. All my iOS 10 devices took the patch today (five of them) without any issues. The upgrade was smooth and so far so good.

Speaking of security exploits, if you want to see the full breakdown, here’s the link from Apple on what they patched in iOS 10.1. If you enjoy reading up on the various attack vectors and how hackers could exploit unpatched devices, it’s a good read.