CUPERTINO — In an intimate event holding no more than 400 people at Apple HQ, new Apple CEO Tim Cook took the stage without a turtleneck — or a standing ovation.The company announced a range of products, apps and services. Here’s what’s new:

The big announcement was an upgrade to the iPhone 4, called the 4S, which will be integrated with Apple’s iCloud service.

Said Phil Schiller, Apple’s VP of Worldwide Product Marketing, “iPhone 4S plus iOS 5 plus iCloud is a breakthrough combination that makes the iPhone 4S the best iPhone ever… while our competitors try to imitate iPhone with a checklist of features, only iPhone can deliver these breakthrough innovations that work seamlessly together.”

The iPhone 4S provided an update to the existing iPhone 4, adding an A5 chip, dual-core graphics processing and a 8 megapixel camera. Apple also claims eight hours of talk time, 14 hours of 2G talk time, 6 hours of 3G browsing and a possible 9 hours of Wi-Fi browsing.

The camera on the 4S will also be capable of recording 1080p video and will come with a new feature–video stabilization. The 4S will also be a “World Phone” as rumored throughout the year, meaning it will be compatible with both GSM and CDMA networks.

Apple also announced a new line of iPod and iPod touch devices, to come out just ahead of that product’s 10 year anniversary this month.

“Over 300 million iPods have been sold,” Cook told the crowd. “It took Sony 30 years to sell 220,000 Walkman cassette players.” — editor note: the figure Tim Cook meant to say was 220 million Walkman cassette players.
He also noted that 20 million songs are now available via iTunes, but the big announcement for the iPod, which will turn 10-years-old later this month, was perhaps that it will now come in white. New iPod Nanos start at $129 for an 8GB model, up to $399 for 64GB.

Apple also announced it will push out iOS 5 to current iPhone customers with compatible devices on October 12. 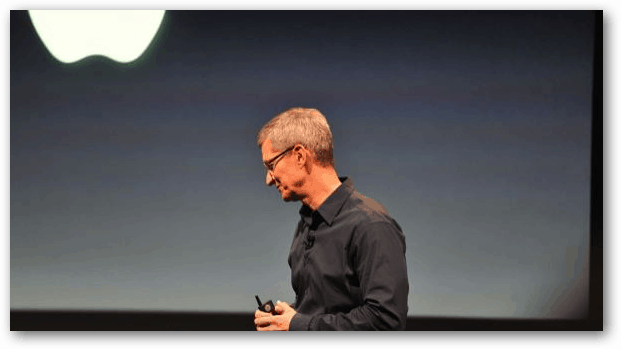 One new feature in iOS 5 and the iPhone 4S is the integration of new voice assistance, confirming another rumor that had leaked out over the past few weeks. Siri is the name bestowed upon the system that responds to user commands.  Apple’s Scott Forstall demonstrated Siri, which is activated by holding down the home button and simply speaking.

“Do I need a raincoat today?” asked Forstall.  Siri responds “It sure looks like rain today.”

Forstall demonstrated a variety of different applications for Siri, from setting an alarm clock to shopping and taking dictation.

The event ended with the expected announcement of a Sprint iPhone, bringing the device to all US carriers except T-Mobile.  The 4S will land on October 14th, with pre-orders starting October 7th.