All three Kindle readers announced the use of e-ink (black and white) for the reader. According to Amazon’s CEO Bezos, the models run down as follows, speaking today at the unveiling here in NYC.

The $79 Kindle reader is available now and weighs under 6 oz and runs quite a bit faster than other Kindle models, execs said today. Its readability is improved, and it is clearly readable in bright light, he said. GroovyReview team members will take a closer look at this soon. It is available now as the latest upgrade in Amazon’s current Kindle line.

Now here’s where things get interesting.

The $99 Kindle Touch is a new addition from Amazon. It’s Wi-Fi only, stores thousands of books locally and on the cloud (free cloud service for Amazon content). Amazon claims significantly longer battery life for this device, available for preorder via Amazon now and scheduled to ship Nov. 21. Its touchscreen doesn’t use the typical capacitive tech so common to touch devices. Rather, it uses sensors. The device supports Amazon’s X-Ray, allowing shoppers to explore via Shelfari and Wikipedia and other means topline details on books they’re interested in. Our team will be taking a deep look at these and all new features in these devices.

The $149 Kindle Touch 3G includes 3G support, which means it is contract-free, and you don’t have to worry about hotspots.  That’s a relief. And it’s free. Amazon is footing the bill for this free 3G connection. Also available for preorder today, it ships November 21 and will be US only for now. 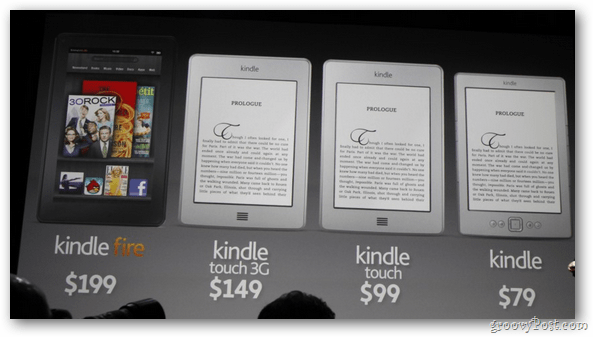 Bezos told reporters here that all three new Kindles will have instant access to the Kindle Store — or customers can use the devices to borrow books from the library. Interestingly, Amazon has taken a page out of Apple’s book — as expected, if you’ve ever bought anything from Amazon, use your regular username and password. This makes them obvious little shopping tablets, just as the Apple App Store used customer information from iTunes to make for easy signup and purchases.