Wondering why WmiPrvSE.exe is running on your computer? This process runs right after booting up Windows 10, but it’s also found in Windows 7 and 8. Here’s the full story behind the process.

Have you come across WmiPRvSE.exe running in the Task Manager, and now you’d like to know what it is? You aren’t alone. This process runs right after booting up Windows 10, but it’s also found in Windows 7 and 8.

Microsoft created WmiPRvSE.exe and loads it as an integral part of Windows. A virus can sometimes hijack or imitate WmiPRvSE.exe, but those vulnerabilities haven’t been exploited on a mass scale in recent years. 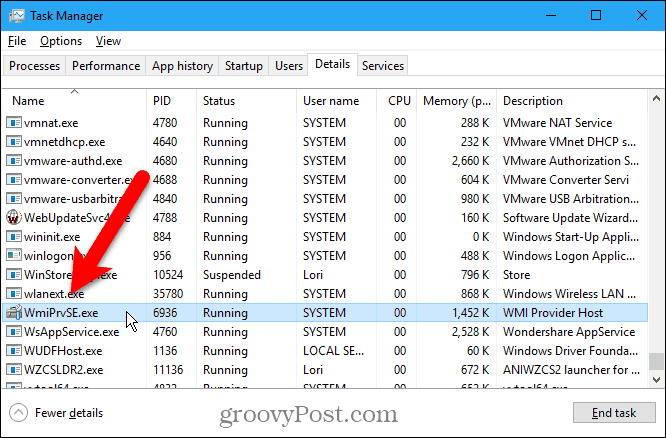 WmiPrvSE is the acronym for Windows Management Instrumentation Provider Service. Or, as the description in Task Manager mentions, it is a WMI Provider Host.

A look through the process strings in Process Explorer reveals WmiPrvSE as part of Microsoft’s Web-Based Enterprise Management (WBEM) system and the Common Information Model (CIM) Microsoft Operations Manager (MOM, which is now known as SCOM [System Center Operations Manager.]) Of course, that doesn’t mean much unless you understand what these things mean.

What is SCOM, CIM, and WBEM?

CIM is a set of standards that allow for compliance between elements managed by an IT infrastructure.

WBEM is a system management technology protocol based on Internet standards that tie into the interface of how an application or operating system is managed. WMI is more or less Microsoft’s way of using WBEM.

In other words, without WmiPrvSE, applications in Windows would be tough to manage because the process is a host that allows all of the necessary management services to operate. Users and administrators would not likely receive notifications when errors occur. A look through Process Explorer shows WmiPrvSE as a child of svchost.exe.

In Windows Server, the process had a post-release problem that inflicted the operating server with overtaxed CPU utilization. But Microsoft patched the problem. Other instances where users have reported high CPU use involving this process were found as viruses that copied the name of this legitimate process.

Relevant registry and system file locations for the process are:

WmiPrvSE.exe is a safe process created by Microsoft and is needed for Windows to function properly. You should not shut it down or mess with it, but doing so won’t cause a catastrophic failure of the system.

Under normal conditions, WmiPrvSE has a small system footprint and only runs when you first launch Windows. If the process causes problems, it’s likely a virus with a copycat name.