Memory errors can exist without any warning signs in Windows. Here’s how to help find errors with the built-in Windows Memory Diagnostics Tool.

Anytime your computer or device starts becomes unstable; there are many variables to consider. Constant crashes such as the infamous memory dump screen or an application crash can be signs of possible memory corruption. This can result in corrupted files or an inoperable system. Whether you purchase or build a new computer, memory errors can exist without any early warning signs. Since Windows Vista, Microsoft has included in a memory diagnostics tool that can check for errors. Before this, users had to depend on third party utilities such as

Since Windows Vista, Microsoft has included in a memory diagnostics tool that can check for errors. Before this, users had to depend on third party utilities such as memtest86+, which can also be useful. In this article, we show you how to use the Windows Memory Diagnostics tool that’s built into Windows 10, too.

If you can boot to the Windows 10 desktop, click Start, then type: memory, hit Enter on your keyboard. The Memory Diagnostic tool offers two options; you can restart right away then begin scanning, or you can schedule a scan the next time you start your computer. 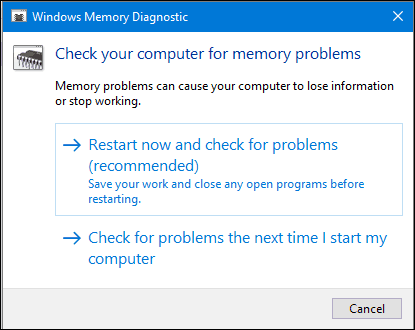 After your computer restarts, it will be booted into the Windows Memory Diagnostics Tool. Windows will run a couple of tests to check your memory for problems. Status messages will indicate if a problem is detected. When complete, Windows will restart your computer automatically. 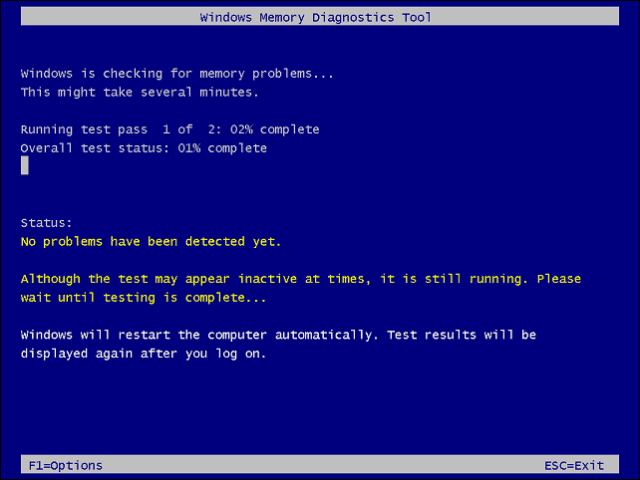 After restarting, a notification will appear on the desktop indicating whether memory errors were found or not.

In previous versions of Windows, the Windows install media included the option to scan your memory modules; if you were unable to boot to the Windows desktop successfully. A third-party utility such as memtest86+ can be used as a substitute. Check out our previous article for instructions how to use memtest86+.

There are other diagnostics test users can try such as, alternating memory modules in different memory banks to see if system boots successfully. Swapping modules can also help isolate a corrupt module. Dust can sometimes be a possible cause of corruption. Using canned air to clean out memory banks can resolve some of these problems.