If you’re a new user of the Xbox 360 and have an iPhone or iPod touch, you can stream music from your iDevice to the Xbox. This is a neat trick and it streams music wirelessly faster than streaming it from Windows 7 Media Center to your Xbox 360.

If you’re a new user of the Xbox 360 and have an iPhone or iPod touch, you can stream music from your iDevice to the Xbox. This is a neat trick and it streams music wirelessly faster than streaming it from Windows 7 Media Center to your Xbox 360.

First, you need to download and install the AirMusic app on your iDevice. The app is $2.99 — but well worth the price for how well it works. 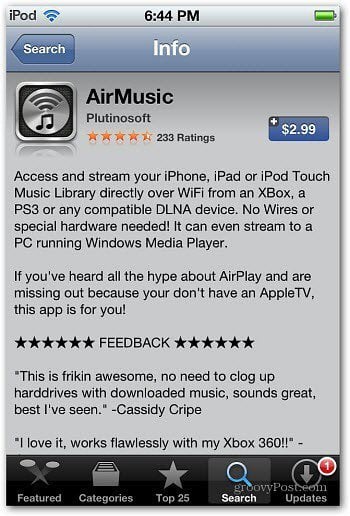 After you launch it for the first time, AirMusic will search your music library on the device. You’ll also get the message that to keep playing music, you can’t put the app in the background for more than 10 minutes or manually lock the screen. Tap OK. 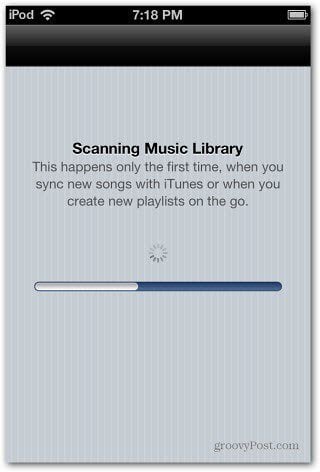 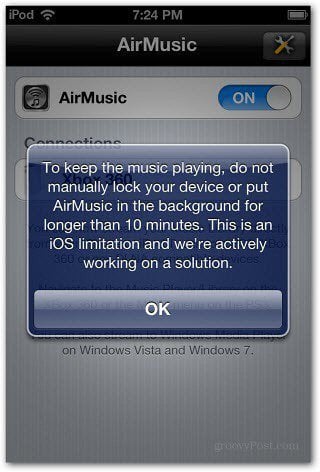 Then you will see the following screen. Don’t switch it on yet. 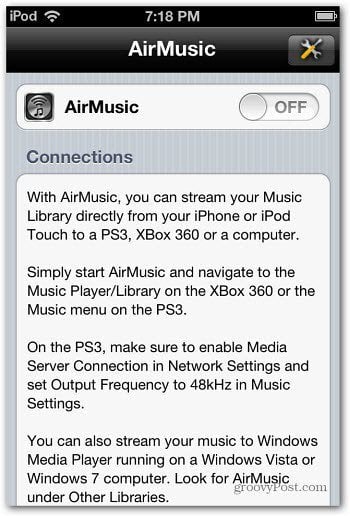 Next, power on your Xbox 360 and navigate to Music >> My Music Apps on the Dashboard. 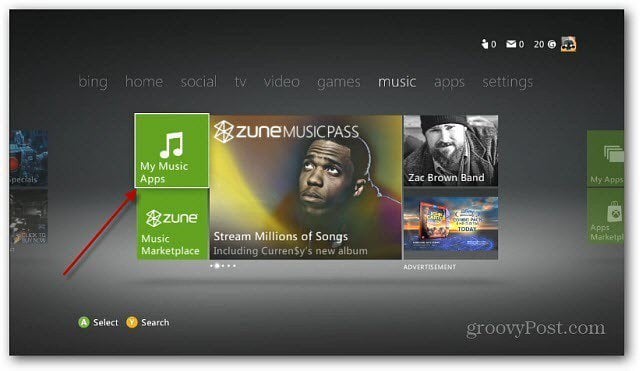 Then select the Music Player tile. 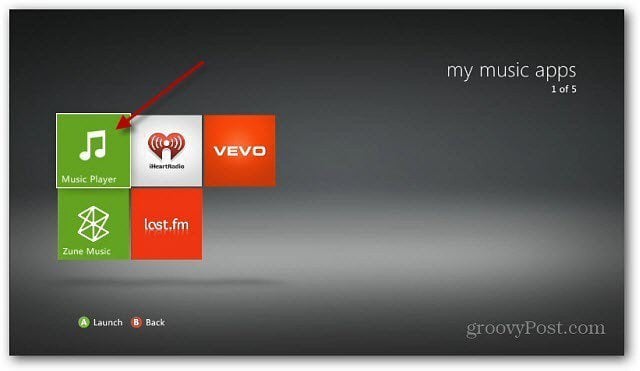 The Select Source screen comes up. At this point you won’t see your iPod touch or iPhone yet. 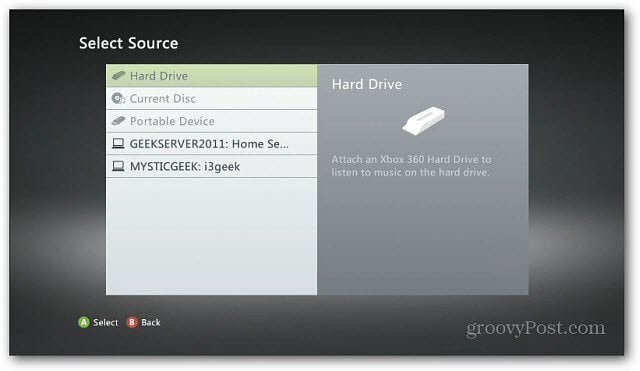 Grab your iDevice and switch the AirMusic app ON. It will start finding devices on your network it can make a connections with, including a Sony Playstation – if you have one, the Xbox 360 and any other Digital Living Network Alliance (DLNA) devices you have. 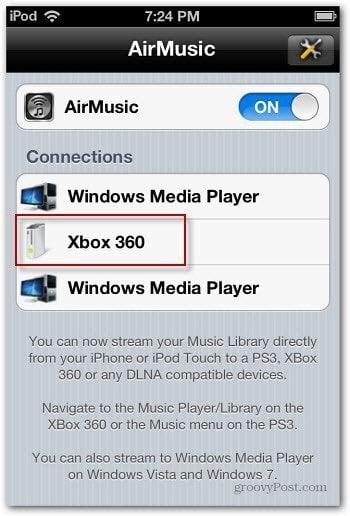 Give it a moment to make the connection and go back to the Select Source screen on your Xbox. You’ll see AirMusic and the name of your iDevice. 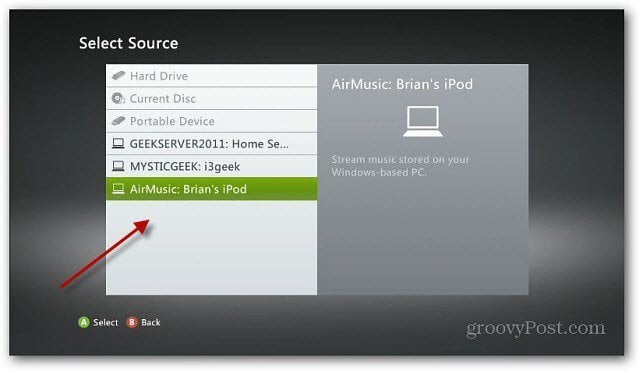 Go ahead and select it. You’ll see all of the music on your device categorized as Albums, Artists, Saved Playlists, Songs and Genres. 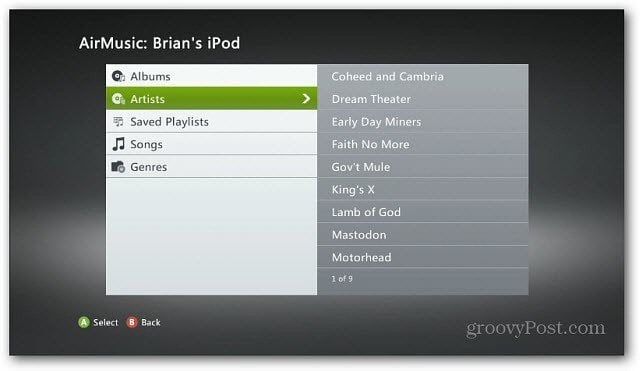 Go through and select what you want to play and there you go! Your iDevice music library is playing over your WiFi to your Xbox. 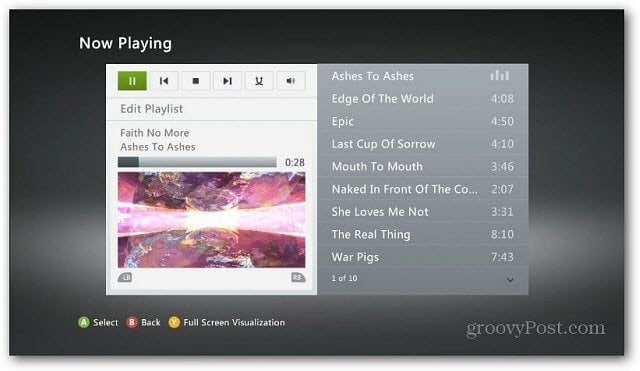 There are Settings you can configure too that let you tweak how AirMusic behaves. It only costs you $2.99 for the AirMusic app, and you’ll be streaming your iDevice music collection to your Xbox 360 in no time. And, no jailbreaking required. 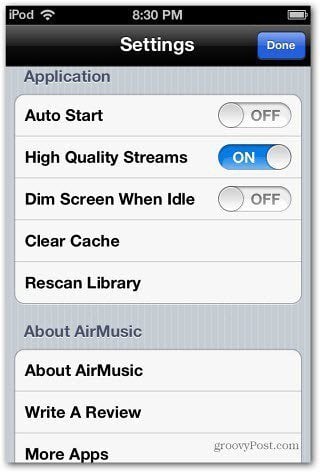 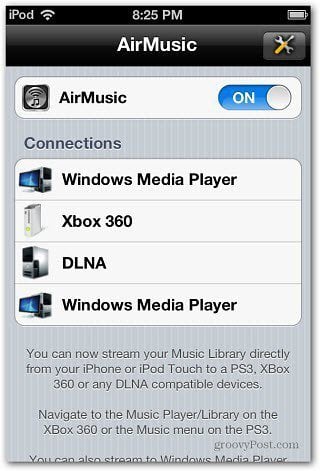 One thing to keep in mind is using AirMusic for extended periods of time will drain your battery faster. But, you can always plug it into your computer or docking station so the battery stays charged up. This is so cool!