The windows taskbar has changed little over the last 10 – 15 years.  In fact, it wasn’t until Windows 7 that the “pin” feature was enabled.  But, even with Windows 7, the taskbar is still rather lackluster.  In the past, I talked about an alternative to the Windows taskbar called RocketDock which up until now has been my favorite.  Recently however I started playing with another Dock which is worthy of a closer look by our readers so take a look at my review and screenshots below and give it a try if it looks interesting to you. ObjectDock is free, but there is still a paid version of the app which unlocks a few features etc..  Overall, still not a bad deal.

When you first install ObjectDock, it will replicate all of the pinned icons on your windows Taskbar (handy).  Unfortunately, the icon for the pinned webapps isn’t very good once they get enlarged to fit the dock.  The visual style of the dock matches up with the iOS (iPhone, iPad) icon dock similar to Rocketdock as well.  Much like the Windows taskbar, as you open apps on the bar, they will automatically appear on ObjectDock, and then disappear when closed; unless you pin them.

If you don’t like the default position (it’s at the bottom like a Mac), ObjectDock can snap to any of the four sides of your screen.  When I first started my testing, it didn’t take me long before I decided to replace my Taskbar altogether for the ObjectDock.  That’s how much I like this….

Object dock has more customization than a car pimped by Xzibit.  The dock is easily customized from the Options Home screen.  What I love is how almost all the options are listed out and easy to understand.  Great UI.  Just remember, almost all the Blue text is a link as shown below.

The options > settings tab has a few groovy options that aren’t enabled by default.  If you want to replace the taskbar, the “Hide the Windows Taskbar” is a must-check button.  Unfortunately, Aero-Peek is a premium feature from the paid edition. 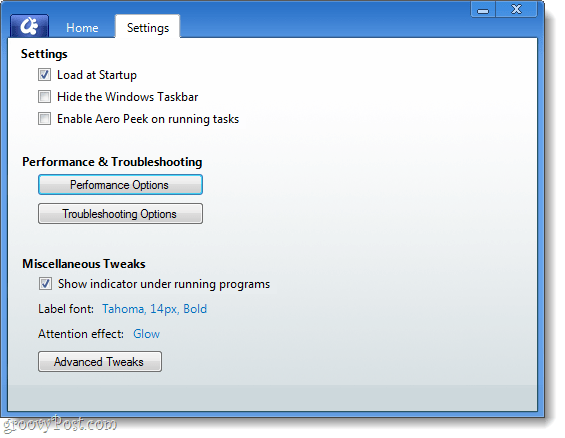 Among some of the other advanced options, you can adjust performance settings although they shouldn’t be an issue unless you’re  running ObjectDock on an extremely old PC. 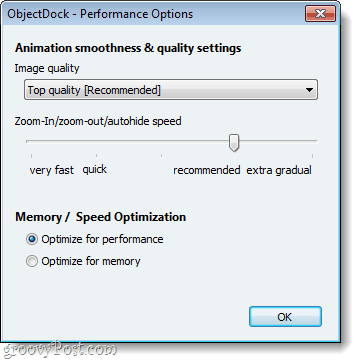 My favorite thing about of ObjectDock is the docklets.  Docklets are a drop-down with your weekly forecast, clocks, calendars, web search, and even a link to the Windows start menu.  Unfortunately you only get 6 docklets, and 3 Windows docklet links –which for me isn’t really enough.  Fortunately the online community is rather helpful and has created a huge variety of 3rd party docklets you can download and install; ObjectDock even recommends visiting WinCustomize.com to download more.

The weather docklet is by far my favorite, and I just had to share a screenshot of it below: 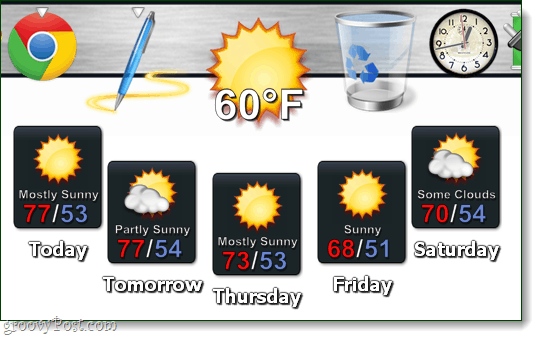 One of my main beefs with the docklets is the analog style clock.  ObjectDock lets you customize the skin for most docklets, but even if you change the skin on the clock it is still as analog. Really?  Give me digital baby! 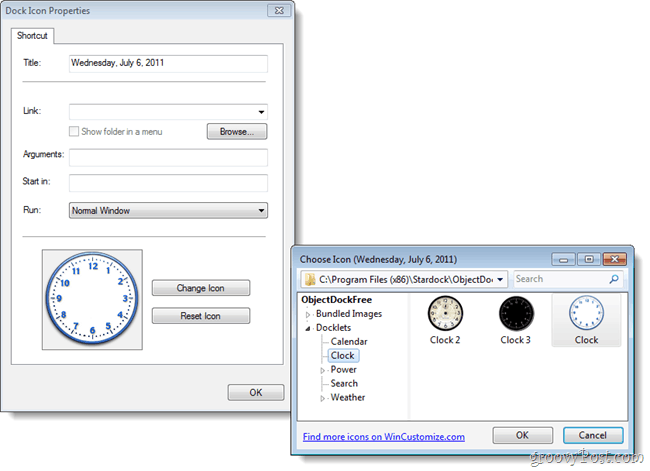 Like any geek, I found a fix for the clock and not only did the 3rd party digital clock docklet tell the time and date, it has a functioning alarm and fully customizable font . 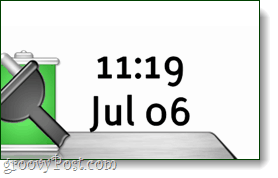 One last groovy bit about ObjectDock that’s worth mentioning is the different themes.  If you don’t like the default “Speedy” theme, you aren’t stuck with it.  Stardock included over a dozen different stock themes, and there are hundreds more available on the web.  But, if you want to be truly creative you can make your own from scratch, or use an existing template. 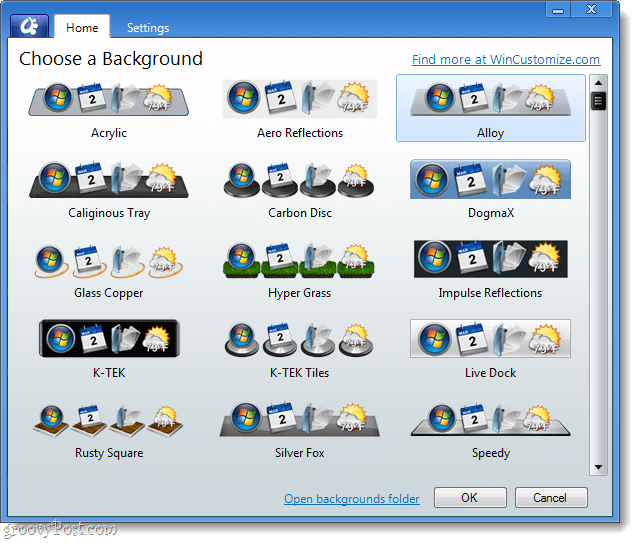 What are the exact differences between paid and free versions?

Stardock outlines the differences pretty clearly on their official download page.  Generally speaking, none of the paid features are anything you actually really need.  Most of the core features are in the free version so unless you see something below (or you want to support the DEV’s who created this), you should be fine with the free version.

ObjectDock is a solid  taskbar replacement and I see it as an upgrade to RocketDock which I previously installed on all my Windows 7 PC’s and now that I’m using ObjectDock, I don’t think I’ll be going to RocketDock anytime soon.