Chromecast is getting some cool new features that were announced at Google I/O this year. Before they roll out, here’s some basic troubleshooting tips.

There was some cool news about Google Chromecast that came out of Google I/O this year. You’ll soon be able to mirror you Android device to the big screen, cast without WiFi, and customize the screensaver, and more.

These new features are said to be coming in the coming weeks. But until they’re actually rolled out, and even after they do, here’s a look at a couple of troubleshooting tips you can use that you might be aware of – rebooting or resetting your Chromecast to factory settings.

The other day I was having problems connecting to my Chromecast using my favorite app for streaming local videos to it, Videostream Premium, as well as other apps from my Nexus 7. It kept saying the Chromecast wasn’t recognized.

I reseated it to the HDMI port on the back of my A/V receiver, and tried cycling power…nothing worked… it was still unrecognized…even by my TV – I just got the  “no signal” message.

Then from Settings select Reboot Chromecast. Or if that doesn’t work, select Factory Reset Chromecast. 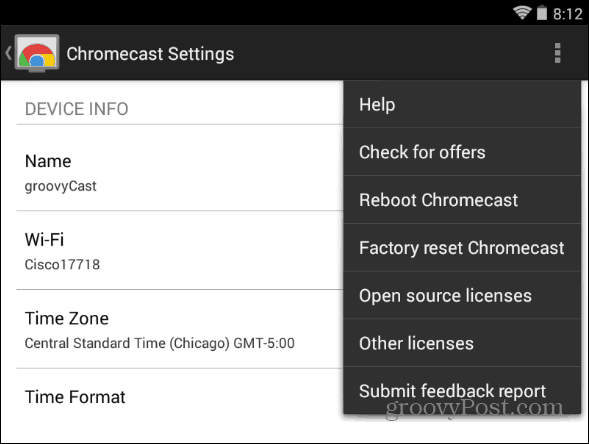 In my case, just rebooting it from the app worked, and it’s now working just as good as ever. Why it worked that way and not after physically unplugging it and plugging it back in, I don’t know. But, sometimes with tech you need to use the “rub your head and pat your belly” approach.

If you’re beyond the point where your smartphone or tablet doesn’t see your Chromecast, you can physically reset it. All that takes is holding down the physical button which is located next to the micro USB port for 25 seconds or until the solid light begins to flash.