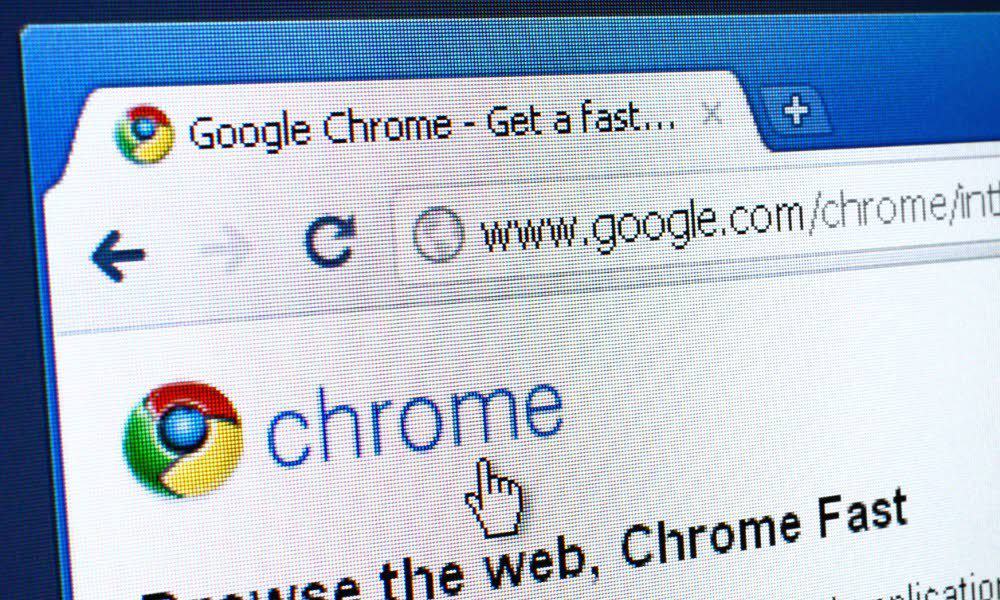 Not sure what the Chrome Web Store is? We have everything you need to know about it right here.

Well, let me try to essay out the significance of this—though I’m not sure the answers we come up with will be satisfying in the way that you hoped or expected.

What is a Web App?

Before we discuss the reason for being for the Google Chrome Web Store, it’s best first to go back and discuss the origins of Google Chrome. Chrome was released as a beta in September 2008, and if you can remember back that far, you might recall that Chrome was never intended to be just a simple browser. Instead, Chrome is built on the premise that the Internet has evolved beyond simple web pages, and now the sites we visit function more like applications. From writing emails, editing documents and photos, chatting with friends, to tracking our personal finances, it seems that not only has all of our “stuff” migrated to the web but so too have the applications that manipulate our stuff. In this way, the web itself is slowly becoming more like an operating system. In fact, Google’s ultimate goal with Chrome is to develop it into an operating system (called Chrome OS) dedicated to giving you speedy access to the web and your web applications. In other words, Google is looking to cut out the clunky middle man—i.e., Windows, OS X, etc.—that gets in the way of where the real action is: the web.

All of this was explained conceptually back in 2008 in comic strip form, but now, that concept is coming to fruition. In fact, Google is already testing out the Chrome Notebook, a laptop that gives you “nothing but the web.” Because they argue, that’s all you need in this day and age.

So, understanding what a web app is and its significance requires a change in how we think about the Internet. To grasp what the Google Chrome Web Store is trying to do, we have to first come to grips with the notion that the web is an operating system.

What’s the Difference between a Web App and a Webpage? And Why is Google Chrome Special?

That is the real sticking point here that makes it hard to understand why and/or how the Google Chrome Web Store matters. What makes Facebook, YouTube, and heck, even groovyPost.com a web app rather than a web page is dynamic web pages. To deliver content and multimedia to you, these web apps require server-side processing that happens on the web rather than on your computer. Facebook won’t work if you’re offline, nor will groovyPost.com.  You can’t download Facebook, and you can’t download groovyPost.com. It would be best if you had your browser to access these web applications.

That’s easy to understand. But why is Google Chrome so special? After all, Google Chrome is still nothing but a web browser. After all, you can use Gmail from Internet Explorer, Firefox, or Opera, whereas you cannot run Office 2010 on Linux (without emulation, that is), and you can’t run iWeb on Windows 7.

What Will I Find in the Google Chrome Web Store? 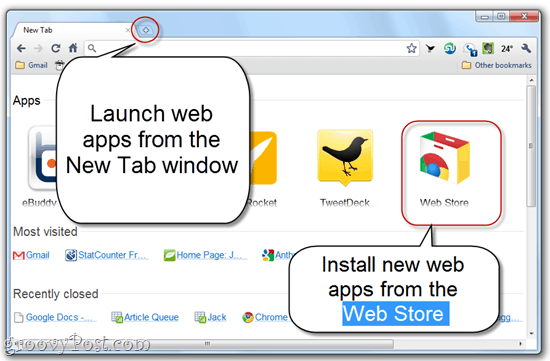 You’ll find three different kinds of items in the Google Chrome Web Store: web apps (discussed above), Extensions, and Themes. Extensions and Themes should already be familiar to you if you’re a Chrome or Firefox user. These are essentially plug-ins that change or augment the functionality of the browser itself. These only work for Chrome.

Your hunch that some of the “web apps” in the Google Chrome Web Store are nothing more than glorified bookmarks is true. For example, when you “install” the Gmail app into your Google Chrome browser, all it does is put a link to mail.google.com in your Apps section. This will be no different from accessing it mail.google.com from Firefox, Internet Explorer or RockMelt. 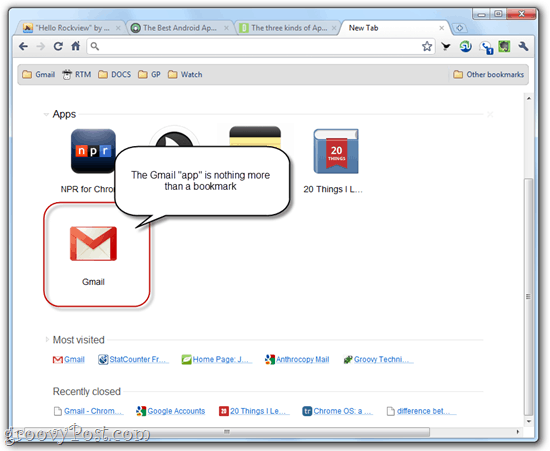 Of course, these “Bookmark” apps aren’t totally pointless. It all factors into Google’s goal in retraining your mindset to think of your browser as your “Start” button rather than an application. They want you to think of visiting a website as you would think of launching an application. By putting Gmail in your apps, it feels more like opening Outlook from your desktop. I bet that Google will do its best to deepen this analogy as they continue developing Chrome and the Google Chrome Web Store.

Integrated extensions (not their official name) begin crossing the line between a simple web app that you can access from any browser (like Gmail and Facebook) and an application that can only be run in Chrome. Extensions, as you know, integrate into the browser bar, adding menus and buttons to your status bar. For example, the Weatherbug extension adds the temperature to the top-right hand corner. If you click it, you get more information served up by Weatherbug.com. 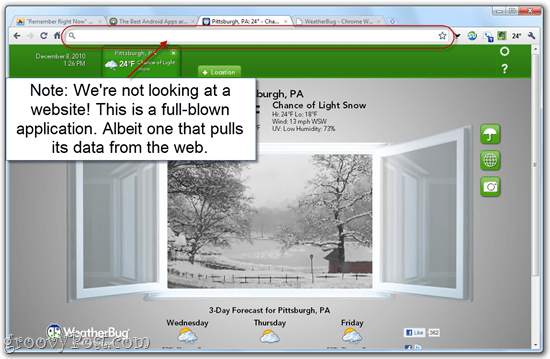 So, this is a real web application. We see the result of server-side processing, but it’s all happening outside the context of a webpage or URL, like www.WeatherBug.com. Think of it as the difference between opening the Facebook app on your iPhone versus navigating to Facebook.com on your iPhone’s browser.

At the opposite end of the spectrum of cross-browser web applications like Gmail and Facebook are full-blown applications. These applications integrate right into Google Chrome, actually treating it as an operating system and using Google Chrome’s API to function. These applications have web functionality, but you can still use them offline. To understand the difference, take a look at what happens when you try to access the Gmail “app” when you’re offline: 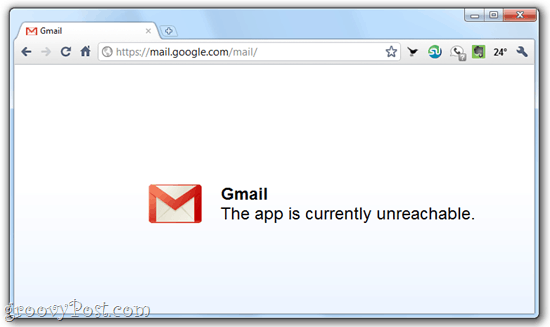 No dice. The Gmail app is unavailable when you’re offline. 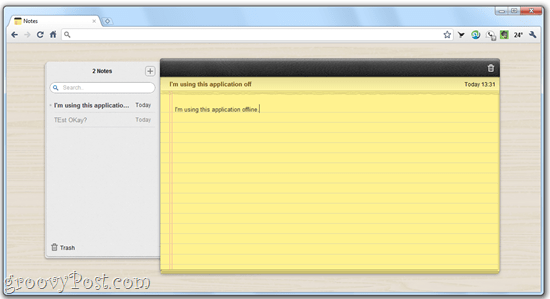 What Does Google Chrome Web Store Mean For the Future?

For now, the pickings for Chrome-only applications are slim. There’s TweetDeck, WriteSpace, New York Times, SlideRocket, Aviary, aToDo, and a few others. But based on these offerings, you can see what Google is going for. Google’s idea of a complete computing experience is where you turn on your computer. Instead of seeing your Windows desktop, replete with the taskbar, Windows Explorer, and your system tray, you’ll go directly into Chrome, and you’ll stay there.

And all of this will be stitched together with your Google Account so that when you get a new computer or log in to your computer at home and open Google Chrome, all of your stuff is already there. No need to back things up, load up thumb drives or use up an entire spool of DVDs to burn your photos.

All of this seems somewhat compelling. It makes sense. It’s kind of how I use my computer now, though there are a few token applications and documents that I only use locally. But if Google has its way, these will become fewer and further between until local computing will be an anomalous relic, like a tape-based answering machine in a world of voicemail boxes.

However, I can’t say that I am ready to buy a computer that’s “only the web.”  And this is coming from someone who bought a netbook in the last year and stores pretty much all my data in dropbox. The Google Chrome OS movement…after all, that’s what it is—a movement (they even have their own manifesto; see page 61)—is predicated on the belief that people want a device that does less than what computers do already. They are stripping out all of the junk that they say is useless or will be in the future and instead are offering web apps that they are asking us to accept as reasonable replacements.

While an iMac may be overkill for getting on Facebook and sharing poetry and photos with friends, I don’t see anything on the Google Chrome Web Store that’s going to do what Final Cut Pro does.  But that’s OK; in fact, Apple is already embracing that use case by releasing the iPad.  Light, simple, easy, and it comes ready with hundreds of thousands of applications, many of which already use the “cloud.”  So part of me says Google is a bit late to the party on this one but then again…  Oh, and then there’s the elephant in the room: security in the cloud, the state of which is as controversial as it is misunderstood.

There’s a lot to learn about what Google is up to with Chrome—and much of it is geared towards changing what you believe about the role of computers and the Internet.  I’ll leave you with this video which explains the Google Chrome Web Store and obliquely outline’s Google’s vision for the future: