Perhaps you’ve heard over the last few weeks about the Canadian Radio-television and Telecommunications  Comission (CRTC) decision to allow heavily throttled high speed internet at higher tiers.  The result has been outrage among Canadians, Americans, and just about everyone who has heard about it.  Some have gone as far as to set up a non-profit Canadian download service that will ship large downloaded content to people in Canada.  But, all of the hub-bub may be coming to an end soon…

If you aren’t aware of the situation, let me bring you up to speed.  In September of 2010 Bell Canada’s proposal the implementation of Usage Based Billing (UBB) was approved.  As a result all of the smaller competing ISPs will no longer be able offer unlimited internet plans.  Since all Canadian ISPs connect through Bell Canada, they are going to be the company that charges the new rates and throttles the connection.  Effective January 25, the CRTC published their decision regarding the matter, and implementation of the new UBB billing will start on March 1, 2011.  Long story short, Bell Canada will make a truck load of cash and everyone else is going to pay for it.

If you’re curious about exact pricing structure changes, the ISP Teksavvy has posted the changes on their website FAQ regarding the new UBB policy.  We’ve posted their chart below: 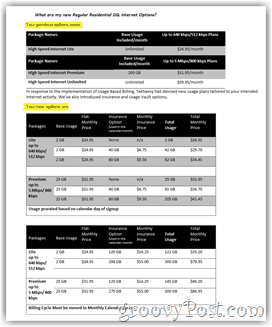 Despite the fact that they will not be implemented until March, the response to these changes has been momentous, and there are very few that support the change.  On the other hand, there are hundreds of thousands who have already signed the petition to remove UBB.  The Toronto Star reports that a senior Conservative government official stated:

“The CRTC should be under no illusion — the Prime Minister and minister of Industry will reverse this decision unless the CRTC does it itself.”“If they don’t reconsider we will reverse their decision.”

“we do expect the CRTC to reverse its decision and to basically go back to the drawing board on this issue, and if they do not do this, we wanted to make it clear cabinet would take its responsibilities to do the same.”

Many Canadian officials see this as a backwards step for technology.  With all of the support rallying behind the removal of the CRTC ruling it is only a matter of time before it is revoked.  But, this decision still won’t change the way Bell CA itself deals with customer pricing, only it’s wholesale ISP access providers.  When you consider that only a fraction of Canada’s population uses independent ISP’s for service, this particular legislation doesn’t make a thundering difference, but it is a start.