One feature Amazon added to its Echo devices is the ability to play multiroom audio. Here’s how to set it up and get started.

Amazon added multiroom music as part of the feature list for its Echo devices last year. It lets you stream an audio source like Music or Radio to other Echo speakers you have throughout your home. If you have more than one Echo device, here is how to set up the multiroom listening feature.

Note: Multiroom audio playback is available in the US, UK, and Germany and works on all Echo devices. However, it does not work with all Alexa enabled devices like the Amazon Tap or Fire TV. Also, all your devices need to be joined to the same Wi-Fi network.

To get started, open Settings in the Alexa app on your mobile device or point your browser to alexa.amazon.com. Then scroll down and select Multi-Room Music under the Audio Groups section. 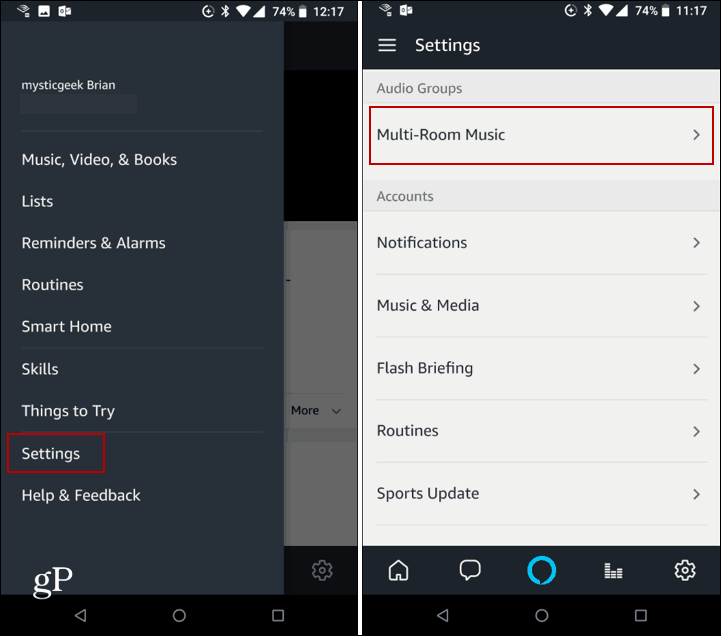 Then you need to give your speaker group a name so they all stream the same audio. You can choose one of the preset names provided or type in your own custom name. Next, you need to choose the devices you want to be in the group. In my example below there are only two, but if you have several Echo devices, keep in mind that each Echo can only be part of one group. 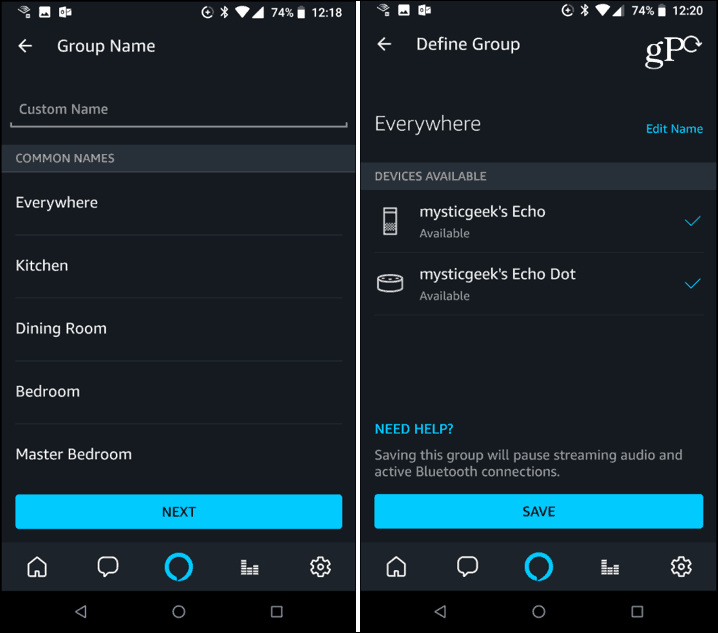 After naming the group and tapping Save, you’ll see the speakers are being connected, and when done you will find your group in the Smart Home section of the app Settings. 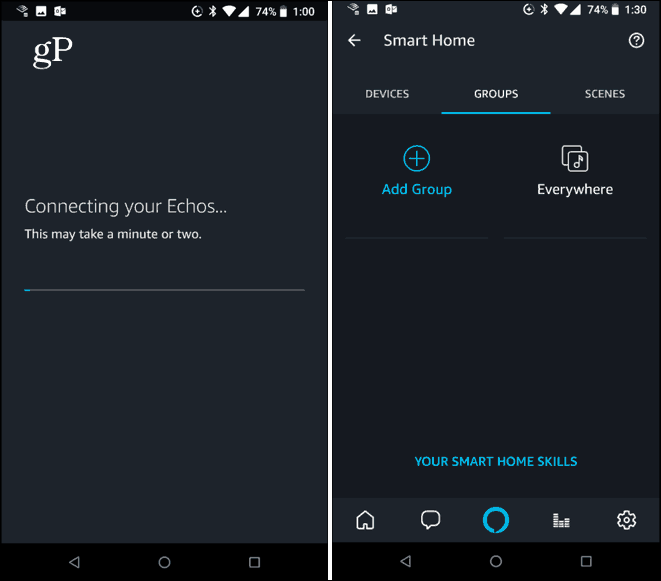 Now that you have your speaker group set up, you can use voice commands like “Alexa, play [radio station call sign] to [Echo group name].” So, I can say: “Alexa, play Metallica Everywhere” and it will play the music from my default music service to all speakers in the group. If you want a different service you can say: “Alexa, play [radio station call letters or streaming service] [Echo Group Name]”. That bit is kind of clunky, but once you do it a few times it works. Currently, some notable services that do support multiroom listening include Amazon Music, TuneIn, iHeartRadio, Spotify, Pandora, SiriusXM, and others.

However, some services and Alexa Skills are not supported, namely, Audible, which is odd considering it is an Amazon property. Audio from most third-party skills won’t work either. For example, I listen to a lot of podcasts using AnyPod for Alexa and multiroom audio doesn’t work with it. But the company is always improving its Alexa and Echo abilities and those types of limitations might be addressed.

In the end, despite some limitations, this is a great feature and can be considered a sort of “poor man’s Sonos system”. An Echo Dot is just $39.99 and the company usually reduces that price several times throughout the year. It’s an affordable way to get the same audio in different rooms while you mill about your house. You’re not going to have the audio quality of a Sonos System, but do you really need it?

Do you have more than one Echo that you put in a group for multiroom audio listening? Leave us a comment below and let us know how you have things set up.