A few years ago I wrote about Microsoft Office and Windows 7 discounts for College and University students and as good as these deals might be, let’s just say I’ve left the best deal for students for last. I’m talking about Microsoft DreamSpark and the great news on this Microsoft program is High School students can also get in on the action.

Unlike Microsoft’s other discount programs, Microsoft DreamSpark offers students FREE, NO-COST access to all of Microsoft’s development, server and designer tools including the following software titles: (as of the writing of this groovy Article) 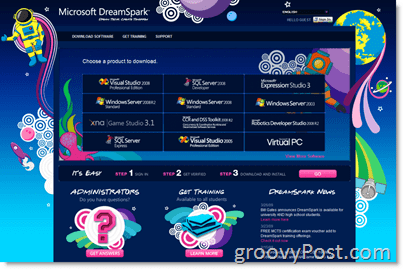 As of March 26, 2009 the DreamSpark program was expanded to include High School students around the globe in addition to College and University Students.  Hear that groovy High School readers!  Microsoft isn’t leaving you out in the cold this time!

Free software is only the beginning of the DreamSpark program. Free training is also available.  I encourage students, parents and educators / administrators to visit the site and review all the details around the Free Software and Free Training for Microsoft Certifications as well as how-to get your school involved in the free programs.

Even more benefits and programs can also be found at: http://www.microsoft.com/student/. Be sure to grab a cup of coffee first however because there’s a lot of content to say the least!