Windows 10 version 1909 November 2019 Update out. If your system is ready for it, here is how to install it manually on your system.

Microsoft recently released Windows 10 version 1909, aka November 2019 Update. There is a minimal number of new front-facing features in this build compared to previous feature updates like version 1903. It is more like a large cumulative update or what we used to call a “service pack” back in the day.

Microsoft is moving its Windows 10 development cycle to coincide with its Azure dev cycle. So, the release of the next “real” feature update (currently called 20H1) has been moved up three months. We should see it sometime in mid to late December. In fact, with the release of 20H1 build 19030, Microsoft removed the build number watermark from the lower-right corner of the screen. Which typically means the new version is near finalization.

The easiest way to get Windows 10 version 1909 is by manually checking Windows Update. Head to Settings > Update & Security > Windows Update and check. If Windows Update thinks your system is ready for the update, it will show up. Click on the “Download and install now” link.

Note: To install version 1909 on your computer via Windows Update, your PC needs to be running Windows 10 version 1903, aka May 2019 Update. 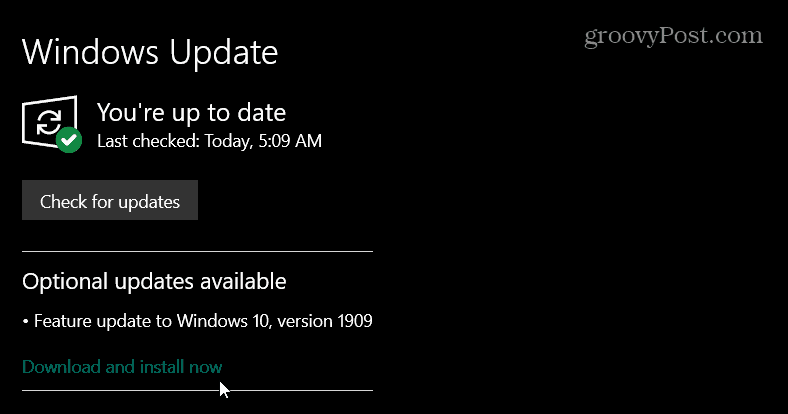 Again, it’s similar to a cumulative update. Version 1909 will install on your system, and during the process, you’ll need to reboot your computer for the update to complete. Or it will restart outside of active hours.

Launch the Update Assistant, and it will check to see the system’s RAM, CPU, and Disk Space to determine it’s compatible. If everything is good to go (and if you’re running 1903, it should be), the update starts.

The Update Assistant tool makes everything is straightforward. Just follow the onscreen instructions and click a few buttons. Note that your system will reboot to complete the update. And you’ll be running Windows 10 1909 in no time.

You can learn of everything new in 1909 from this Microsoft article. But here’s a summary of what you can expect: